I have an old Colnago I want to resurrect, which after some Google-ing I have discovered is very similar to the bike here (but in blue): 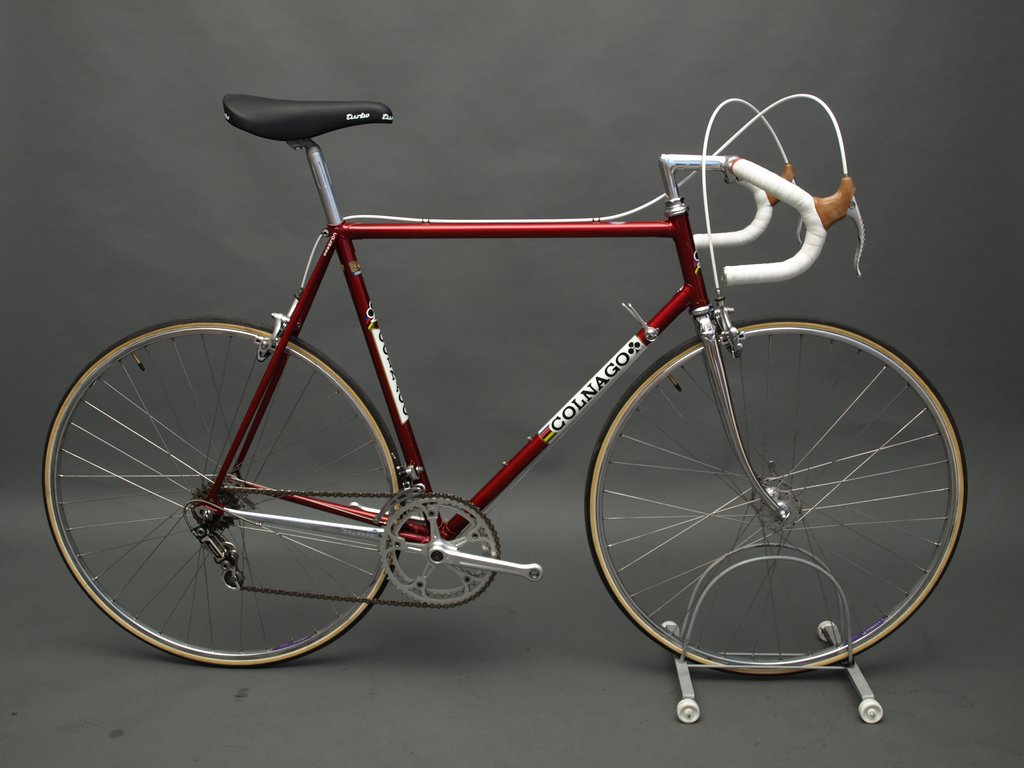 I want to replace the drop bar brakes with "standard" brakes on the handle bar (this bike isn't for racing, just going around the city and it's more comfortable like this). So I am thinking of taking off the old brakes, re-taping the bars and fixing some new levers to the bar.

Problem is, I have never done this before and it's a first time. So my question is: do I need anything special to convert it? Or can I just use some standard v-brake levers?

After this the next question is I want to replace the whole crankset, cassette, pedals - the works. Brakes first though.

Edit: By "standard" I mean what this bike has, but with both sets of brakes.

There are interrupter levers such as the Tektro RL720 pictured here (courtesy of Rivendel):

You will need to redo the cabling, but standard V-brake levers will not work for a variety of reasons (handle bar diameter (conceivably, you could shim it on, but this doesn't seem very safe) and amount of cable pull (which you could solve with a travel agent, but this is pricey). Most of these are designed for 24mm clamp diameter bars, so you may need a new bar if yours doesnt have this diameter.

Arne's suggestion is a good one though - you could fetch a pretty penny for that thing from a vintage bike nut, and get something thats more discrete for riding around town and other things (and has the essential rack and fender mounts).

"Standard" brakes is not a thing. Can you be more specific? You imply you want to replace the brake levers with a different style, such as those designed for flat bars, but you provide a photo of road calliper brakes as your replacement. Are we talking about the brake callipers or the levers?

As Batman points out, there are issues (though not insurmountable) in changing from one brake lever style to another, but they can be a pain all the same. Differing amounts of cable pull being a good example. If you mean suicide brakes, then seriously reconsider this. They are not safe and only actuate the real drop brake lever. They will also seriously degrade the value of your bike.

If you mean to change the callipers, then this is a much easier job, but you also have to think about compatibility; is it a recessed bolt or nutted, is the reach compatible with the wheels.

Above all, if the current setup works, you'd be best leaving it and maybe tuning it, rather than switching out entire systems.

And if you do decide to sell it, I'll put up my hand.

PS: Interrupter brakes, as Batman suggests, do indeed work by pushing the housing rather than pulling the cable, and are really designed to be between two pieces of housing, as in the image. But they will work adequately if you push the housing away from the… I think it's called the nipple. The only dodgy bit is that the nipple is sitting in the equivalent of a cable stop, and so is not very snug.

Get used to riding a drop bar bike as it is before you make this sort of change. You will probably find that you can amble along not working very hard with your hands on the tops, but when you want a bit of power, keeping your hands on the drops is suddenly much more comfortable, powerful and efficient. (Back injuries may change this, making the "drops" position painful or uncomfortable)

Then when you need to stop suddenly, you will need the brake levers on the drops; as the bike is designed.

Move the brake levers to the tops and braking is only safe and convenient when your hands are on the tops; i.e. when you aren't going very fast. That's a very bad idea...

The "suicide bars" mentioned in another answer are well named : they flex badly so while they provide a little slowdown with your hands on the tops, they won't provide the braking you need when you really need it - in the wet you will slide helplessly into the obstacle at almost your original speed. Far better to shift your hands to the drops and brake as hard as you need, and the easiest way to train yourself to do that is to unscrew the "suicide bars" and recycle them.

If you are going to use the original "calliper brakes" then you cannot use a Vee-Brake lever as it pulls too much cable and will not work properly.

You can obtain a traditional brake lever, Velo-Orange supply a suitable type ("VO City Bike Brake Levers"), with a 23.8mm clamp to fit traditional drop-bars. Otherwise, you may be able to remove the clamp from the original levers and swap them into the new levers.

Another option to consider is the "Dia-Compe Guidonnet Brake Levers." They are intended to be fitted to drop-bars and allow you to brake from the top of the bar and from the sides as well, but not from the bottom of the drops. They are a traditional French "Cyclo-touriste" design that work well.

If you want to improve the braking with the original callipers, purchase some high-quality brake pads such as the Kool-Stop "Salmon Compound" type.

Not the answer you're looking for? Browse other questions tagged road-bike brakes brake-levers vintage or ask your own question.