Is it possible to predict when roads will have less traffic?

I'm planning a two day trip down the UK country roads. I'd like to time and plan my route so that I'll have a pleasant ride. Is it possible to tell which days of the week would see the least traffic? I'll be cycling from dawn till late afternoon on both days.

Generally speaking, Saturdays and Sundays are quieter than weekdays.

The Department of Transport collects various statistics on road use. This table (TRA0307) shows average traffic by time and day of the week. 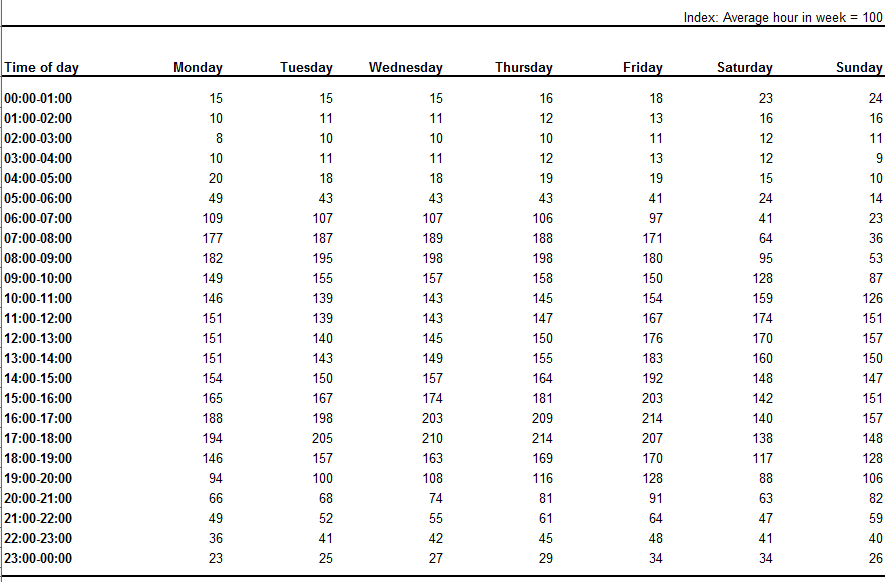 Finally, there are statistics for average annual traffic on every major road in the UK. There's an interactive map here.

The full answer is it depends, as Chris has commented.

If it is really a country road, you can also encounter farm animals as they are being moved, or farm machinery (or it can encounter you). This can happen on any day of the week, as can the other kinds of traffic. In general the only category that might be expected to decline is commercial trucking on a Sunday.

You don't mention if you are in the UK; if so, a reconnaissance trip could be worth it.

Another source of information would be local cycle touring clubs or groups.

The roading network in the UK is well categorised so understanding what the different categories of roads are will assist you in planning a route:

M Roads motorways bicycles are banned from using these.

A Roads major roads intended to provide large-scale transport links within or between areas. These are generally dual carriageways and will have consistent haevay traffic especially in peak travel times which may lead to congestion.

B Roads roads intended to connect different areas, and to feed traffic between A roads and smaller roads on the network. These will be well maintained roads with lighter traffic between peaks.

Classified unnumbered smaller roads intended to connect together unclassified roads with A and B roads, and often linking a housing estate or a village to the rest of the network. These will have some traffic at the peak but generally quiet.

Unclassified local roads intended for local traffic. Generally always quiet unless there are road works or a detour in place.

These road types should be identifiable on any map. Generally speaking if you planned a cycle tour that avoided A roads you should have a reasonably quiet run for most of the day.

Not the answer you're looking for? Browse other questions tagged touring traffic uk planning or ask your own question.

2
Cycling in high traffic roads
4
Will I have problems maintaining a bike from the UK in the US?
6
If a lane is going to expand should the left lane be taken prior to the expansion?
11
How long does it take to be ready for a multi day ride as a newbie?
7
Road positioning when stopping at an intersection with stationary traffic
8
Is it possible to find the actual GPS coordinates of roads, rather than the surface they're on?
15
500mile bike tour?
8
Which traffic light do I have to follow?
8
How to mitigate the risk of riding on highways