When Mark Cavendish says he's sprints at 1500 watts how long is that for?

In an interview with Cycle Sport, Cavendish said he puts out over 1500 watts of power.

“You’d be surprised at my watts,” Cavendish says.

“I put out 1,490 today in training, on bad form, but I won’t put that out in a race. It’s not watts, and it’s not just my frontal area in a sprint. It’s everything beforehand. How I ride in the peloton. My pedalling action. How I sit. I save so much energy for the finish.”

That kind of power is going to be between 5-30 seconds, and is most likely a 5 second maximum, or he's quoting the absolute peak that he put out.

There is a very interesting analysis of several Team Columbia riders from a couple years ago when Cavendish won the stage. A few riders have 30-40 second pulls at the front in the 650-700 watt range, and in the leadout, Markus is at 700+ watts for over 30 seconds with a peak over 1000.

So if the leadout is at 1000, Cavendish probably is doing 5-20 seconds in the 1200 range as he comes around the slingshot, with surge peaks into the 1400 range, but that level is not sustainable. You can see this when sprinters mistime their sprints and start losing steam short of the line.

Here is the link with the powerfiles.

Quoted like that, the 1580watt number will be for 1 second most likely.

1 second is the typical recording rate of the SRM PowerControl units (same with the Garmin Edge). So unless a duration is specified, "maximum" will refer to the highest recorded sample in the file

(the PowerControl can record faster than 1 sample/second, but the higher rates are typically only used for analysing events like standing starts in track racing, not for 200km road-race stages, where 0.25 second resolution is excessive)

This article on "The profile of a sprint" gives some specific numbers:

The whole article is worth reading, and it backs up the quote from your question "It’s not watts, and it’s not just my frontal area in a sprint",

We know that the highest sprint power is not always the race winner, because there is no correlation at all between the two outcomes

In practical terms, such a reduction in CdA (~10%) can result in more than three metres advantage over a 14 seconds sprint. Based solely on these data, it becomes obvious why there were no correlations between absolute power (Watts) and race results

Tactical variables may be as important as, or even more important than, power alone. A recent case study showed that a good position in the bunch and team support are important factors for road sprint performances (Menaspa 2013)

I had tweet from Velon (a company that deals with data gathering from the pro peleton) in a news feed today.

It immediately made me think of this question.

Sam Bennett sprinted to 2nd place on stage 2 of the UAE Tour with the following power figures: 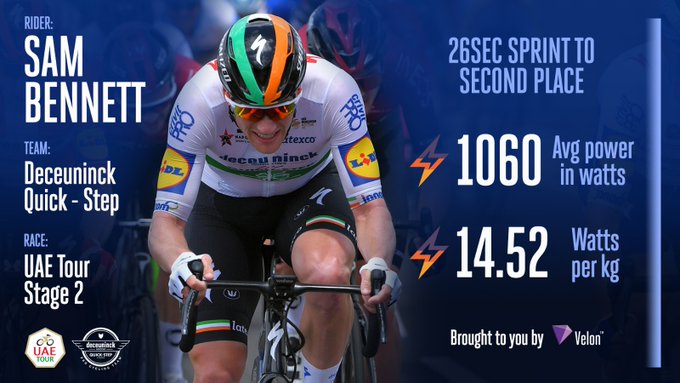 Hopefully Velon continue to make more interesting data like this available in the future!

Not the answer you're looking for? Browse other questions tagged racing or ask your own question.