A couple of days back, on our way to California (in a car), my wife and I passed a unicyclist going the other direction, uphill, on a fairly challenging section of Route 66. (I think we were in Arizona.) The guy had on his back a LARGE backpack that, based on my experiences Scouting, probably weighed 40-60 pounds, maybe more. No idea how far he had traveled so far, but presumably he was out for a multi-day trip (on roads that would exceed 6% grade for miles at a time).

What are the records for unicycle travel? Are there any unsupported cross-country trips on record? How common is unicycle touring?

Unsupported unicycle touring is not very common because it doesn't work very well - you really need to carry more stuff than can comfortably be carried in a backpack while unicycling, which limits the amount of time on the uni, which in turn limits how far you can go. As well, unis are slower than bikes which further limits distances. Towing a trailer kind of defeats the point of a uni, and makes the whole process very difficult. But that's what you need if you want to carry more than a days food and water. That said, people regularly manage 50-60km a day, so it is possible to tour.

These two managed 3500km across Australia, and unicycle forums are where you'll find most of the details. 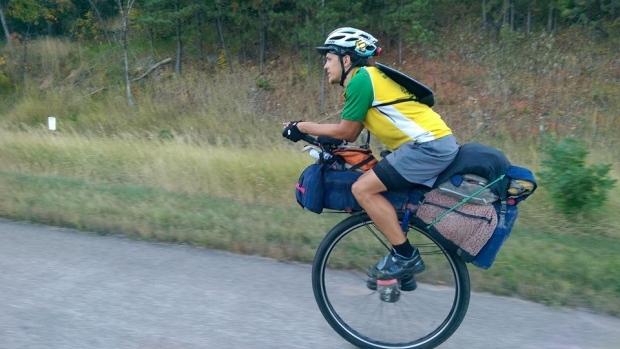 A unicyclist on a record breaking tour of North and South America has reached British Columbia, after biking more than 22,000 kilometres on one wheel. 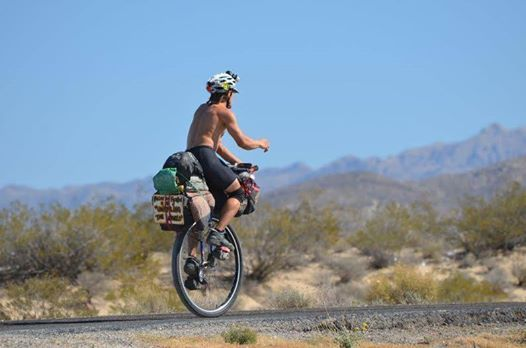 Lots of the "unicycle touring" I've been able to find is fully supported - it's one or two people on unicycles, followed by at least one motor vehicle carrying all their gear. This guy rode 15,478km across Australia and also claims to hold the Guinness world record (that site is all about the fundraising effort).

(edit) Also, the legalities can be difficult - in many countries unicycles are technically not allowed on the road, or the rules are bizarre (unicycles are bicycles, so riders must keep at least one hand on the handlebars at all times, for example, or must have two brakes). In Australia and New Zealand, for example, they are sometimes "bicycles" and other times "wheeled recreational devices" which must be ridden on the footpath. I've not seen those rules enforced in either country, but they exist. I suspect if a unicyclist was hit by a car they'd be treated even worse than a cyclist in the same position.

Unicycle touring is not common, but I go about 60 miles a day on mine. Unigeezer has done some one day trips up to 150 miles on a 36". It takes longer but is lots of fun as well. Luggage racks can be installed as well to improve the distance between restocking. Also distance per day can be increased with a geared hub.

15
What to look for in a Beginner Unicycle
4
How to plan routes for touring?
7
What are the advantages of owning a Unicycle?
4
How practical is an unicycle on uneven surfaces?
3
Active Cycle Touring Blogs
8
Would learning to ride a unicycle boost biking skills?
2
Is "touring bike" a common term in the USA?
5
Solutions for transporting a unicycle by bike