I'm pretty handy with bicycles, but I'm a little stumped on this one. Have a 90s Cannondale SR800 which is solid other than the back wheel was angled to the left side of the chainstays. Ridable, but you can tell if you try to ride it without any hands. Pulled everything apart back there and discovered that the drive side (right) end of the skewer was bent.

I also double checked and when the axle sits properly all the way in the dropouts that the wheel is aligned as it should be so I'm pretty sure the frame isn't bent.

So I assume the bad behavior was due to the bent skewer. Ordered a new one. Clamped everything down, and realized that the issue is actually that the axle will shift when enough force is applied to the chain when pedaling hard.

I assumed I just needed to clamp the skewer down harder, but the same issue happened and you can hear a pop from the back of the bike when it shifts. I clamped it down a little harder and the axle movement happened again and this time bent the end of the new skewer on the right side.

The dropouts are a slightly weird design where they are angled down and forward at roughly 130 degrees.

My guess is that the bike is missing a washer or something similar on the axle that's causing it not to clamp down properly. Currently the axle is just sitting in the dropouts with no extra hardware and it seems pretty snug in there. The same amount of axle is protruding on both sides of the back hub as well and I'd say each end is covering about 75% of the dropout.

I think there's more wrong than you've spotted. Unless there's a chunk missing from the end of the axle or the dropout you shouldn't get any movement under power or not. Bending a QR skewer is not easy to do, which suggests that there's a lot of force being applied, and it's obviously being applied where it shouldn't be.

Here's a picture of that model, and the rear dropouts don't look unusual at all IMO. I'm not a fan of the 5cm long unsupported rear extension, but it can be made to work (obviously enough): 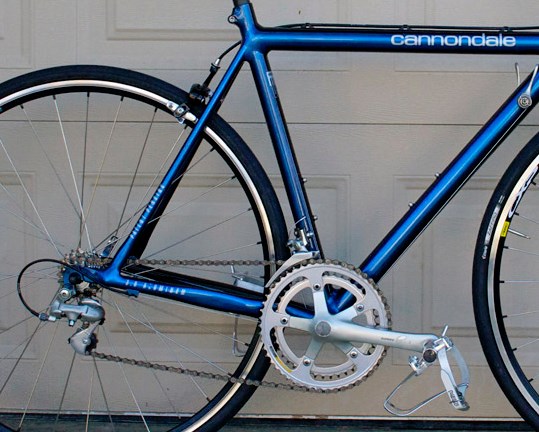 I suggest looking for cracks in the frame, ideally by getting someone else who can sit on the bike and hold the brakes while pushing on the cranks. Wipe it clean, then get down and look for cracks opening up as they put pressure on the cranks and lean back and forth. The dropouts moving will definitely bend a QR skewer. And shortly dump you on the road, BTW, when the frame breaks. Look especially around both dropouts, but also the whole rear triangle. A seatstay breaking loose at the top could possibly cause this problem too (very unlikely but possible). The fix is, obviously, a new frame.

The other thing to look for is a chunk knocked off the front inside corner of the dropout. If the axle can grind into there under power that could also produce the problem you see. The half-arse "fix" for that is to move the axle right in the wheel so there's more poking out on that side. Which will work after a fashion for a while. The real solution is to replace the frame, and on a bike that old, that really means replacing the bike.

Edit: bringing discussion from comments up into the answer.

the drive side dropout is definitely more chewed up (axle can move horizontally about 1mm) than the left side is which doesn't move at all. I checked to see if the frame was bent at all with the string method and it was exactly correct. Couldn't find any cracks either.

How insane would it be to have someone add some aluminum (fill in a little bit of the dropout) and then grind it back out to spec?

The issue is that the frame was heat treated after it was welded together. So when you weld it again you're changing both the alloy and the heat treatment. As a rule what you get is both softer in some places and more brittle in others (Murphy's Law says it will be soft where it's vulnerable to abrasion and brittle where it flexes). Even so, that is definitely worth trying when the alternative is throwing away the bike.

The worst failure mode is likely that dropout breaking off the frame, which will probably shove the wheel into the frame and you'll skid to a halt. So it's relatively survivable as such things go.

Any kind of epoxy or filler is worth a try because it's cheap and reversible. But those fillers will be softer than even the original aluminium, so they will be ground away faster then ideal.

Another approach would be filing a little off the inside surface of the dropout to make space and gluing a steel plate in place, just because steel is harder than JBWeld. If you have access to basic metalworking tools and advice that's probably a better idea. Gluing steel to aluminium can be done, but use a specialist adhesive rather than generic "superglue".

I think your best bet is the aluminium welding solution. Remember that the seat stays are thin-wall hollow tubes and discourage the guy from welding to them, maybe focus just on bulking up the dropout. I'm not an aluminium-working guy, so I'm just suggesting that because I've seen some pretty ugly "add lots of metal" fixes that break because they're transferring stress to places that are not designed for it.

Not the answer you're looking for? Browse other questions tagged fork cannondale skewer or ask your own question.

2
100 mm front hub, 94 mm fork dropouts, options?
8
What's this mark on my chainstay?
3
What are my options for correcting a bent aluminum fork?
5
Find or fabricate a metal bracket for bicycle trailer
10
Upside-down Fork vs Traditional Fork
1
How to insert fork ring tightly?
5
Brand new bike. Briefly removed the rear disc brake caliper, now it's too tight
1
10-speed shifters work with one wheelset but not with another
3
Front wheel skewer snapped
2
Wheel not straight in dropouts - can this cause brake rub?