Using a bike with Trek ABP on a trainer

I was planning on doing my winter training this year on a mountain bike (for ergonomic reasons), but it occurred to me that the skewer for the Active Braking Pivot on my Top Fuel might not be work well. In the below pic, you can see the metal flange which would sit in the trainer, I'm worried about it getting bent or otherwise damaged (I'm ~205lbs/94kg). For those not familiar with ABP, there's a pin that moves through the channel you can see at the end, which allows you to unscrew the skewer (the end cap is attached to the frame). 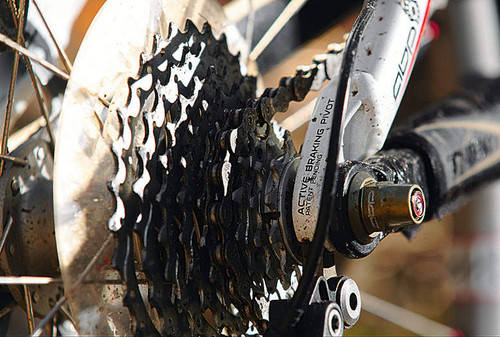 Has anyone had experience with using an ABP bike on a trainer, specifically with long-term regular use? I have a blackburn fluid trainer.

Almost certainly you will damage that pivot and possibly the suspension action. I've used a trainer with a normal quick release skewer, and it tends to mash up the drive side, even if it's a metal end. Plastic ones get destroyed - that's a lot of weight to be putting through something that isn't designed to be weight bearing in that fashion.

My trainer came with a big chunky metal QR skewer that weighed about twice as much as a normal one, but was designed to fit firmly in the trainer, for this reason, but I suspect from what you've said that won't be compatible with ABP.

Given that your setup is perhaps even more risky than using a normal skewer - damaging a fundamental part of the suspension, rather than a cheap QR skewer - I really wouldn't recommend using that bike with a trainer.

Have you considered rollers instead? They're a bit scary at first, but once you get used to them they're a lot less dull than a trainer, plus they're better for developing a smooth pedalling technique.

Not the answer you're looking for? Browse other questions tagged mountain-bike trainer or ask your own question.

15
Will cycling off-the-trainer with the trainer's steel skewer damage my bike?
26
Can using a trainer damage my bicycle?
2
Using older mountain bike in a Trainer
2
Old bike compatibility with direct train bike trainer?
4
Using trainer as dynamo
1
Using wrong speed/size cassette on trainer
2
I have steel pieces after using my turbo trainer? How can I solve this problem? Is this is a problem?
0
Trainer tire for Specialized mountain bike with a Cycle Ops
0
Mountain bike trainer tires