Replacing a chainring - what did I do wrong?

I thought I could figure out repairs myself but clearly I'm a moron.

I replaced the chain and chainring on my fixie last Saturday, and this morning it got scary loose on me. I started to feel what felt like slack in the chain, but when I pulled over to check it out I noticed that all five of the bolts on the chainring were halfway to falling out.

From start to finish, here's everything that I did when removing the worn ring and putting the new one on:

All told, I rode about 20 miles between installing the new chainring and the extreme loosening that I had this morning. Did I miss some fundamental step in this process, or was this just bad luck? What can I do to keep this from happening in the future?

I only removed one of the bolts because I didn't have the time to take the whole thing apart. If necessary, I can disassemble the entire thing when I have time. 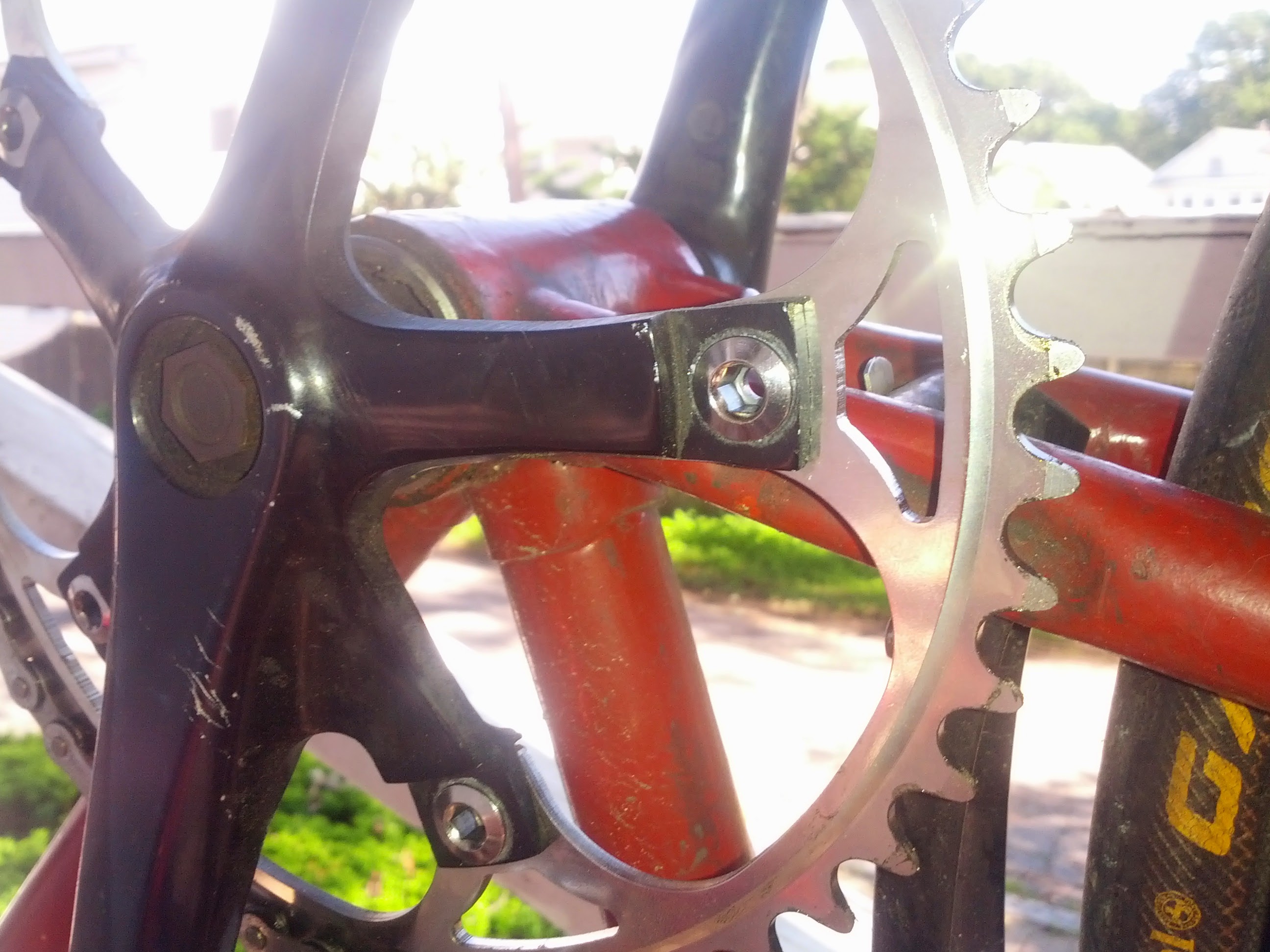 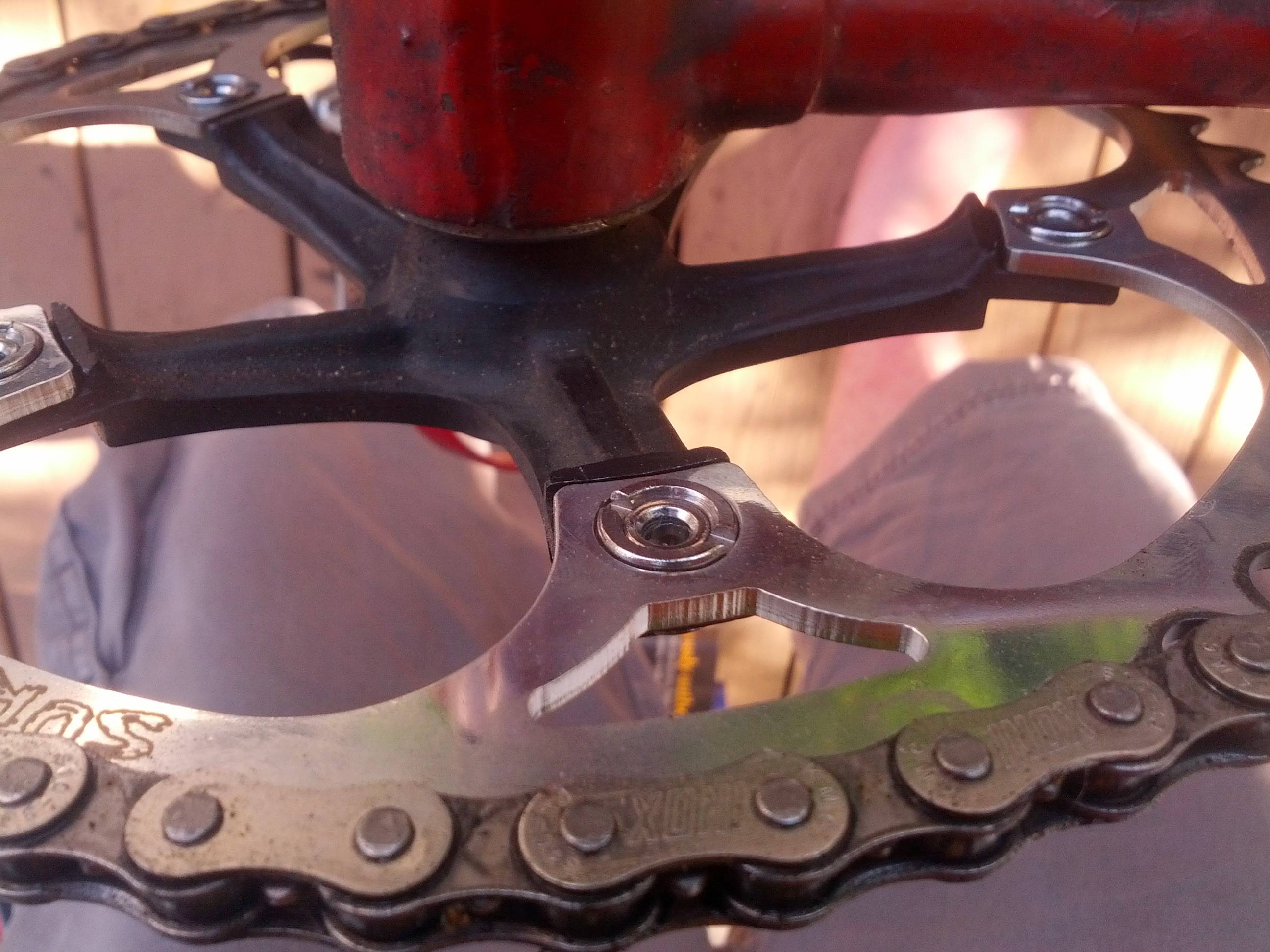 Outside after I removed a bolt 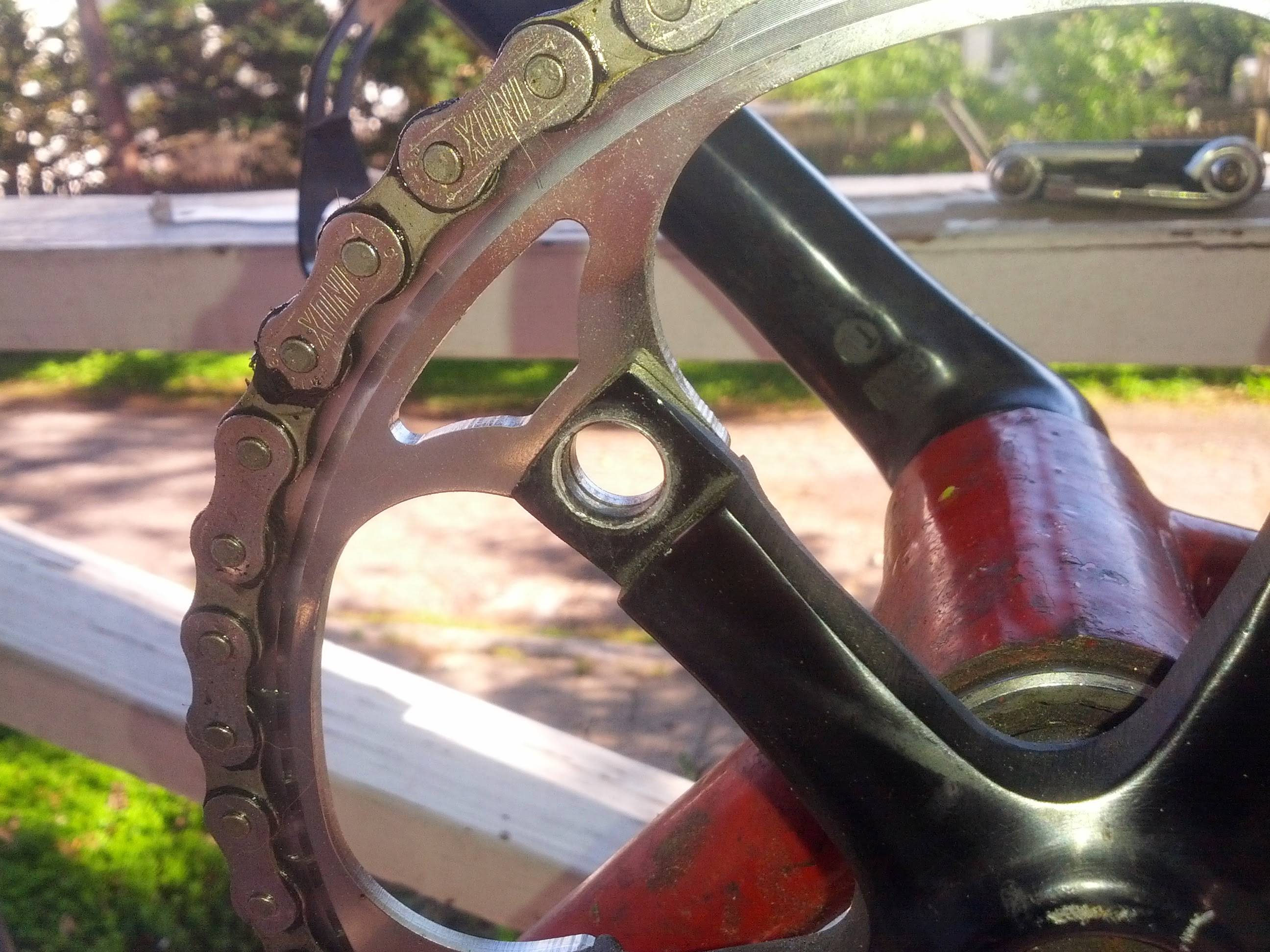 Inside after I removed a bolt 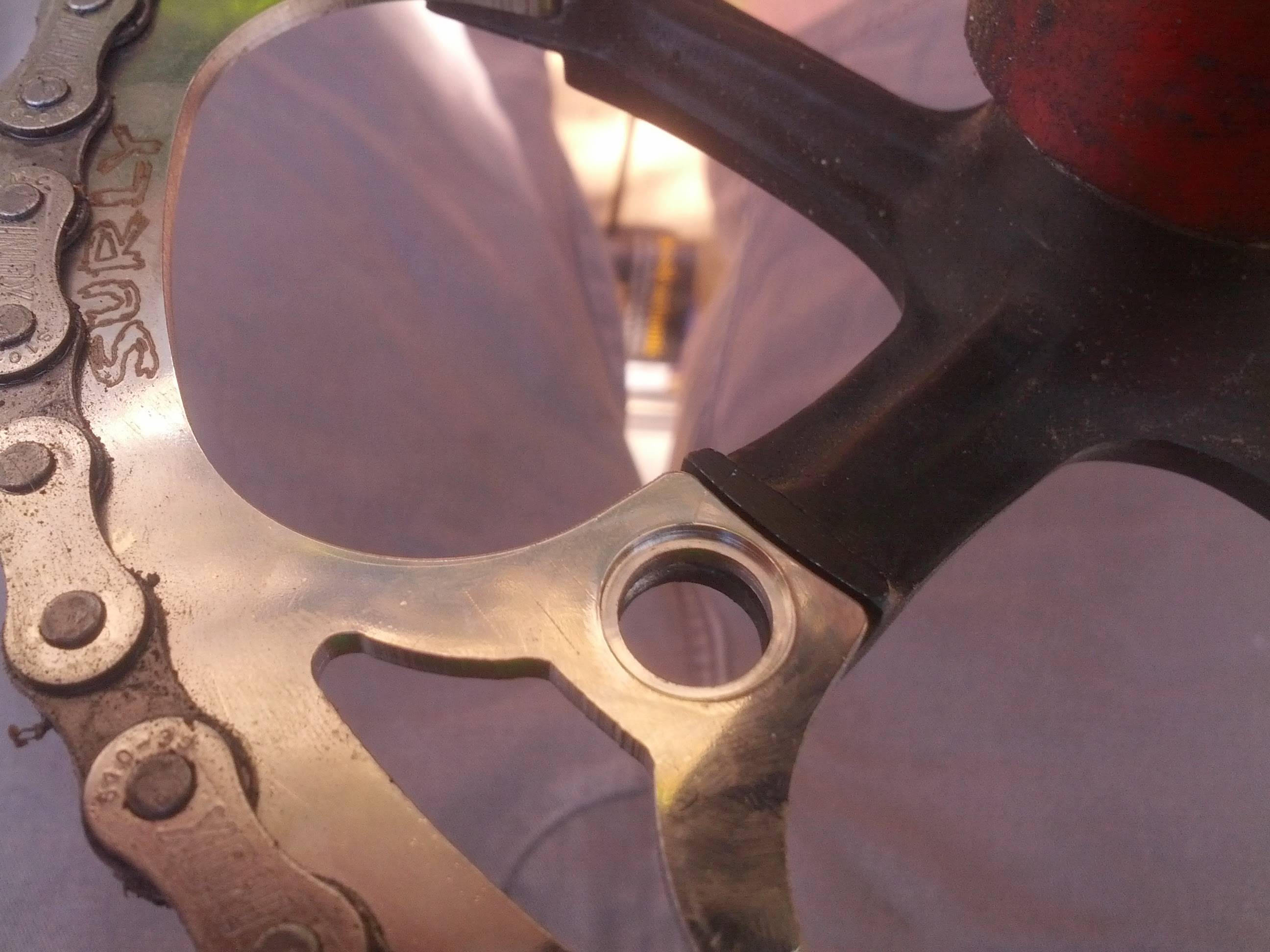 The bolt I removed 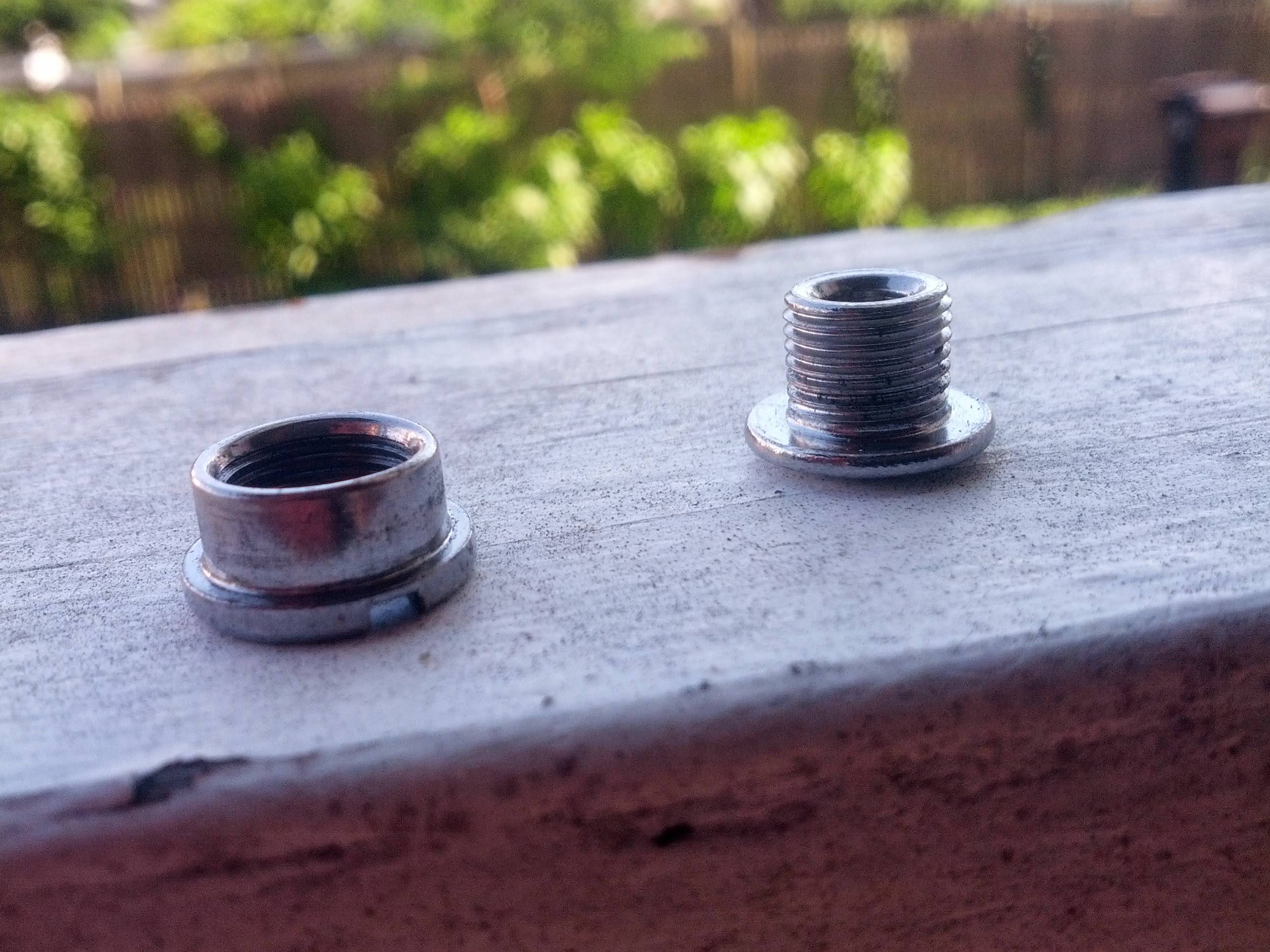 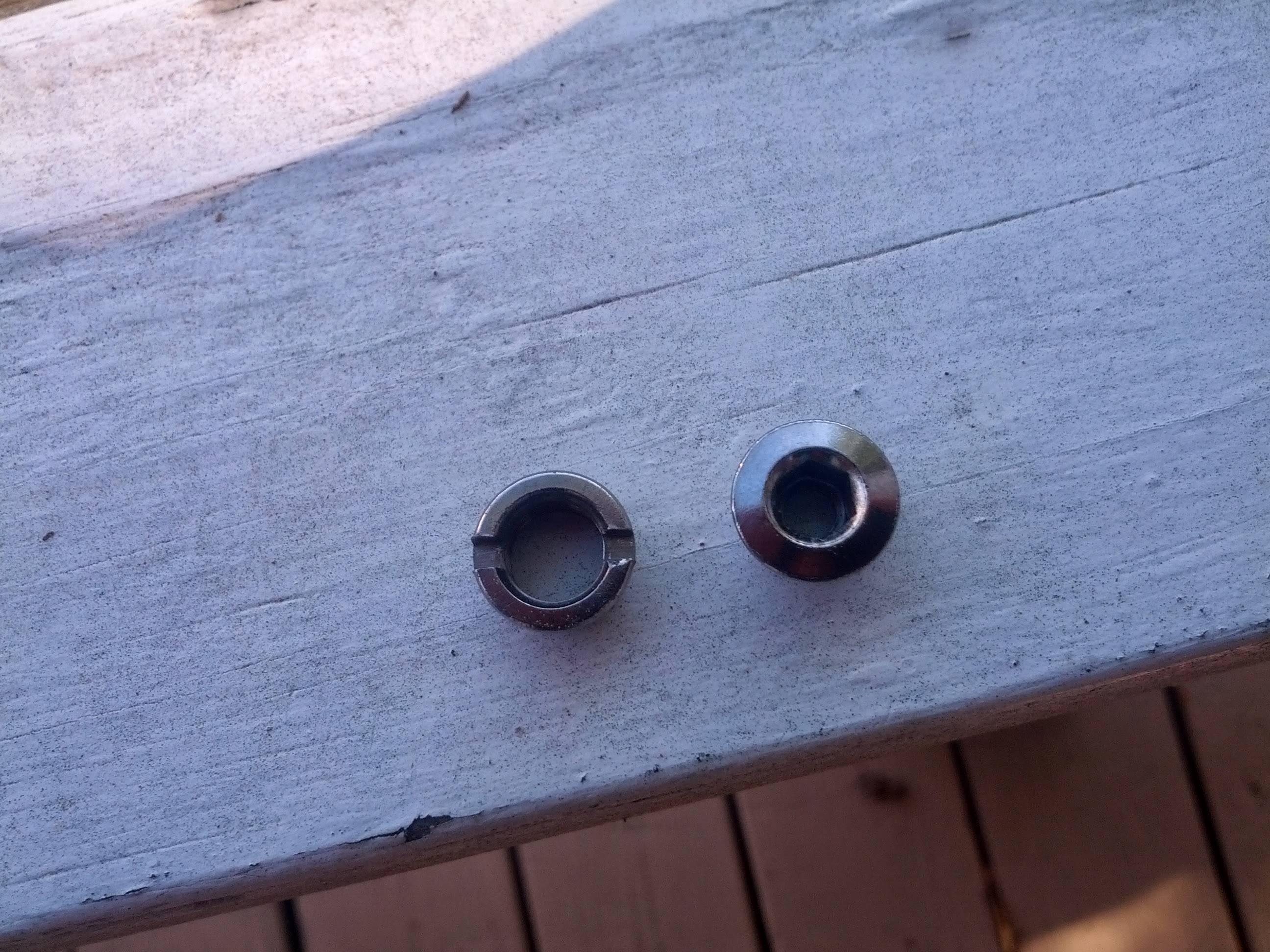 A drop of blue Locktite (use sparingly on each bolt) will fix this problem: http://www.loctiteproducts.com/p/t_lkr_blue/overview/Loctite-Threadlocker-Blue-242.htm

It says threadLOCKER but it mainly provides thread friction so bolts don't back out of their own accord. RED locktite on the other hand, locks it on there.

As to why those bolts backed off, some of the steel bolts I've seen have a very low friction coating on them and with the high torque you get with the fixies, well, they can back off.

Don't just tighten them once and assume it's ok. Go around the ring and tighten every other bolt until you've tightened them all. You can do a star pattern if you prefer, just don't tighten them simply in order around the ring. Make a couple passes and incrementally increase tightness. You want to ensure they are tightened evenly, so that none of them are loose while others are over-tightened. Use a torque wrench if you're really worried about over-tighening.

SurlyInstructions
Are you sure you have 6mm (single)?

That bolt looks long relative to the nut to me. I seems like more thread on thread is a good thing.
SingleChainrignNutBolt

TruVativ
Understand you don't have a TruVativ but only place I found torque. For steel torque is 12-14 nM. And they show the nut on the chainring side (like you have it).

Not the answer you're looking for? Browse other questions tagged safety repair chainring or ask your own question.