Am I required as a biker to use the bike lane on the right side of the road?

The following is a google maps image of a busy intersection I need to take during my commute: 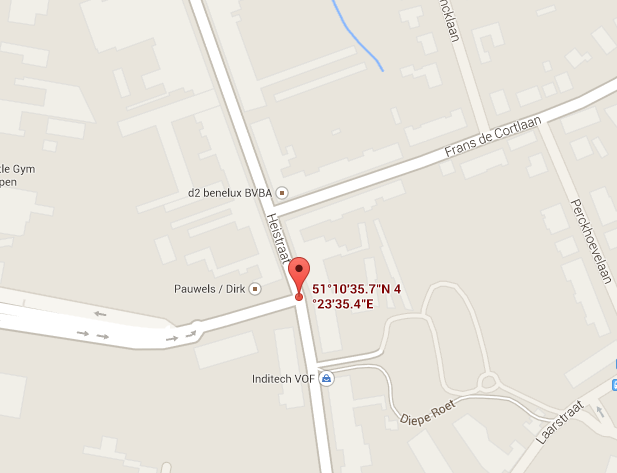 When I come from the West and need to go via Diepe Roet (that small curvy street to the South), there is a cycling lane up to the intersection. However, I find it hard to judge the traffic situation, because there are usually 4 or 5 cars waiting from either side, and they don't usually use their indicators properly. There's also not enough illumination to completely cover the intersection.

The solution I've found is to head north along Heistraat. If it's not yet dark, I try to cross at the Frans de Cortlaan, which doesn't have nearly as much traffic. However, there's not much light there either, so if it's dark (in the winter), I drive another 50 meters or so further North. There is a school there with clear illumination on both sides, no perpendicular streets, a long speedbump and a zebra crossing. Both crossings are in my opinion far safer to cross, because it's much easier to see oncoming traffic in both ways. After having had an accident in the dark when crossing at the marked intersection, I rarely cross at that street, except during the holidays when there's no school traffic.

However, I need to drive on the left hand side bicycle lane for this, and I'm not quite sure how dangerous or legal this is. I'm not the only cycler who does this on that intersection, and I feel like I got enough justification to do it. However, if I get into an accident, I could get into trouble for not following the normal flow of traffic.

Is driving against the flow of traffic an appropriate maneuver to counteract the danger on that intersection?

Riding against the flow of traffic is dangerous and illegal.

If an intersection or a set of intersections does not permit you to ride safely, walk your bike.

Am I required as a biker to use the bike lane on the right side of the road?

According to one bicycling guide for Belgium "Cyclists have to use the cycle track if there is one available on the right side of the road or one that is designed for driving in both directions. "

However that same guide lists a number of fines when a violation occurs and does not list a violation of this in its section on fines. Further, wikipedia indicates that "some European countries, including Germany, France, Denmark, Belgium, and the Netherlands have defined liability legislation. Thus there is a legal assumption that motorists are automatically considered liable in law for any injuries that occur if they collide with a cyclist. This may hold regardless of any fault on the part of the cyclist and may significantly affect the behavior of motorists when they encounter cyclists."

That won't help you if you are badly injured or killed in an accident, however it suggests that cyclist safety is paramount in any case. It may be that if you are fined you can explain the situation and reduce or have the fine waived due to the circumstances in that particular section of the city.

Is driving against the flow of traffic an appropriate maneuver to counteract the danger on that intersection?

In Belgium at least, you are required to take the bicycle lane on your right if it exists.

Yet, sometimes, safety would be higher somewhere else. You should always prioritize safety, and it sometimes requires to do barely legal stuff. In that case anyway, people (and most likely cops) will be understanding if you have a good explanation.

Keep on mind though that the roads are usually designed to be as safe as possible, and the guys who designed it had a better overview than you have right now. (Most of the time)

But never, ever go on a bike lane in the wrong direction. You would endanger yourself and other unsuspecting users.

Always keep in mind the true purpose of segregated bicycle facilities. To keep bicycles out of the roads that motorists think belong to them. They are not built for safety. In fact they are usually more dangerous than riding on the road. I always avoid them and ride on the road instead, that is my recommendation.

24
Passing cars on the right, and later merging into their lane
14
How do you decide your route to commute to work?
3
Using the outer lane of an inner-city one way system - where do I ride?
28
What's the safest way to turn left from a right-side bike lane?
12
Is it legal to pass a car on the right when that car is turning?
13
Can cars legally drive in the bike lane down the street?
7
How to cross major road 3 way intersection
87
How to pass a bicycle while driving a car