I was wondering which of the above seating postures (of road bikes or mountain bike) is better for back bone?

Whether any of these seating postures could cause back pain, slipped disks etc?

The number of comments to your question is becoming quite large, so I thought I'd roll my comments up into an answer (of sorts).

You ask whether the seat postures could cause back pains, and whilst I have no specialist knowledge in this area, I'd have to say from a purely empirical viewpoint that the answer must be "no". A lot of people ride a lot of miles on a lot of days, without suffering long-term pain.

But it's not a blanket "no", there are caveats. For example, if you have a badly-fitting bike, this can quickly cause pain.

Plus don't forget, under the large umbrellas of "road bikes" or "mountain bikes", there are many different frame geometries which offer many levels of comfort.

For example with road bikes, at one extreme there are bikes designed to be ridden by professional racers, whose geometry will sacrifice comfort for efficiency/performance.

At the other extreme there are, for example, touring bikes which are designed with a more relaxed geometry, so as to be comfortable for riding all day, over several days, and carrying a load. There are a gozillion bikes in between, and the story is repeated for mountain bikes.

Example: two different road bikes (same manufacturer). The first (left/top?) photo shows a bike from their "road" [i.e. racing] range, the other from their "touring" range. You can see the different frame shapes involved. (The two bikes look pretty much to be on the same scale, certainly they both run 700 tyres.) But if you look at both the vertical and horizontal distances between the saddle and handlebar, hopefully you can envisage that the rider of the left bike would have their back more horizontal (efficient but uncomfortable), the rider of the right bike will have their back at maybe 45° (give or take), a far more comfortable position. 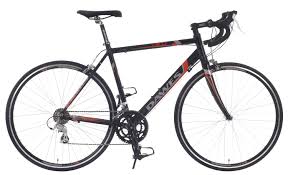 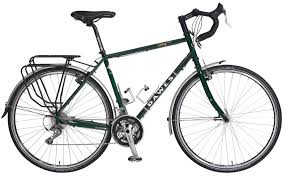 (this is more of a supplemental answer to Pete's one)

The main factor is likely to be how far forward you lean while stilling on the bike, with a racing bike putting you further forward. One reason cheap mountain bikes are so popular is that the more upright seating position is more comfortable. But the main area these bikes cause pain is your upper back and shoulders, from the extra weight resting on that area. But I'm not a medical professional, this is just opinion.

You've left a few options off the list, though.

Dutch Bikes are commonly even more upright and comfortable than mountain bikes. They're not fast, but they're comfortable and they're designed to be ridden in everyday clothing, and have luggage space. 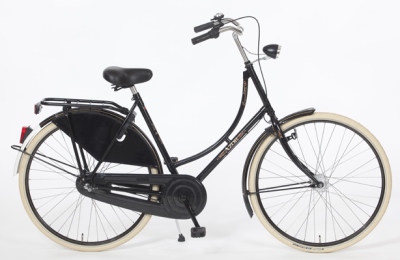 Recumbents For people with back pain sometimes that's not enough. There's a whole other type of bikes called recumbents, because they take the "wouldn't you rather have an armchair" approach to bike seats. 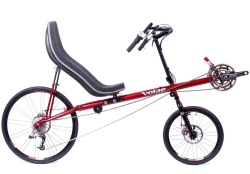 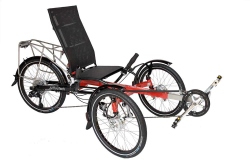 Note that in both cases there's a big base area of the seat that you sit on, plus a substantial backrest. You're also leaning back rather than forward. There are a huge range of shapes and styles of recumbents, but they're more expensive than most upright bikes.

I've seen a lot of people riding different bike styles and I've heard at least one person say that the few different recumbents they tried all made their back pain worse. But I've heard from more people who had much reduced back pain or simply couldn't ride an upright any more because of a back injury. So if you do have pain, and find an upright bike does not help with it, it might be worth trying a recumbent.

Not the answer you're looking for? Browse other questions tagged mountain-bike road-bike saddle seatpost ergonomics or ask your own question.

5
Adjusting saddle angle on a road bike (drop bars)
7
“Proper” cycling posture on a road bike with drop bars?
10
Would the seating position of a road bike cause issues with prescription glasses
9
Switching from a mountain bike to a road bike
2
Correct sitting posture for my bicycle
5
Why can't I find a comfortable saddle?
5
Do high and narrow seat and back bending provide good bike riding posture?
22
Are single chainring mountain bikes usual?
3
Need help understanding my grip shifters on my handle bar