How do I remove rust from my seat tube?

I just pulled my seat out as the first step of breaking my bike down for winter storage, and found that rust has formed between my seat tube and my seat post. The rust starts maybe 3" down the tube and continues for perhaps 4 more inches.

Is there anything I can do to remove the rust from the tube and post? What steps can I take to prevent it from reforming? 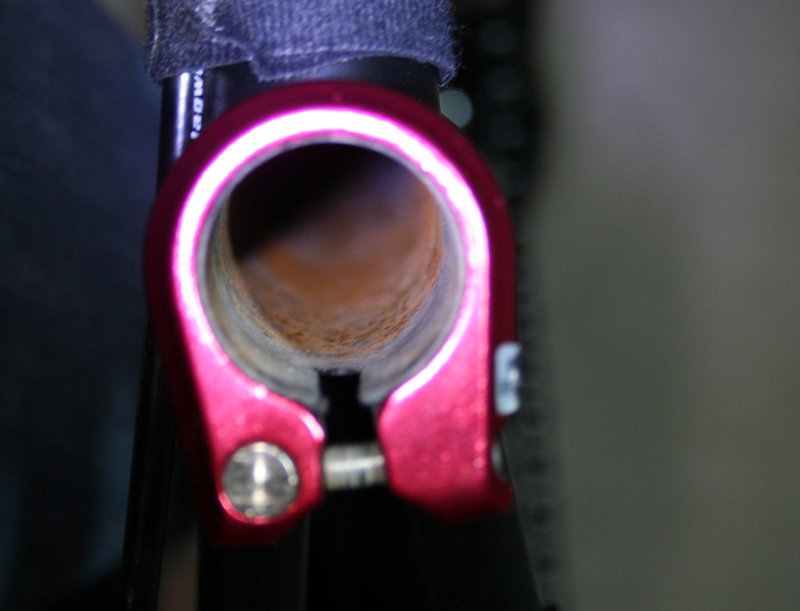 You can probably use a small wire brush to get the rust out of the frame and for the future use JP Weigle Frame Saver spray. It acts as a rust inhibitor so should slow down/stop any rust forming on the inside of the frame. You can get frame saver at JensenUSA (I'm sure there are lots of other spots too).

+1 using Frame Saver. I live in a rainy area and use it on all my steel bikes.

If you want to completely clean the rust off before application, use a copper wire cone brush (w/ long drill attachment) big enough to fit snugly in the seat tube. Use the low-speed drill setting and gradually run it up and down the inside of the tube. You can also use a rust cleaner and apply it to the brush or even some WD40 to help break up the rust.

If you have it, you can clean out the tube with a sponge brush attachment. Next, plug up the holes of the frame and lightly spray the Frame Saver inside. Roll the frame around to completely coat and set aside to dry for 24-48 hours. It will feel tacky, but not wet when dry.

To completely side step this problem, you could also buy a non-steel seat post.

I found this video, and decided to do like him. He puts some kind of extension on his power drill, and on the end he puts a tiny 1 inch steel wire wheel. He drives the wheel up and down in the seat tube for some time until the rust is gone.

I tried hard but never found a wirewheel this small in my country, at least not one that would fit on an extension. So I improvised.

I bought a piece of 12mm round timber. In the end I cut a 5cm slit, using a hacksaw to make the slit as thin as possible. I cut a 5cm wide strip of the most coarse emery paper I could find, inserted it into the slit and wound it around the pole.

The paper was sort of flapping, since when rolled compact together, the diameter was not as big as the inside of the tube. I thought this flapping was good enough, but after some time very little had happened. So I putting pieces of toilet paper in between the layers/windings of emery paper to increase the diameter. In the end I had a perfect diameter that I was able to fit into the tube, while it was still pressing on the sides.

It took a few minutes to remove all the rust.

The diameter of the pole was too great for my power drill, so I cut it thinner with a knife. But it was very difficult to cut in such a way that this thinner part was parrallel to the rest, and therefore the pole was hitting/hammering when rotating. It would have been much better to have bought a 10mm pole. 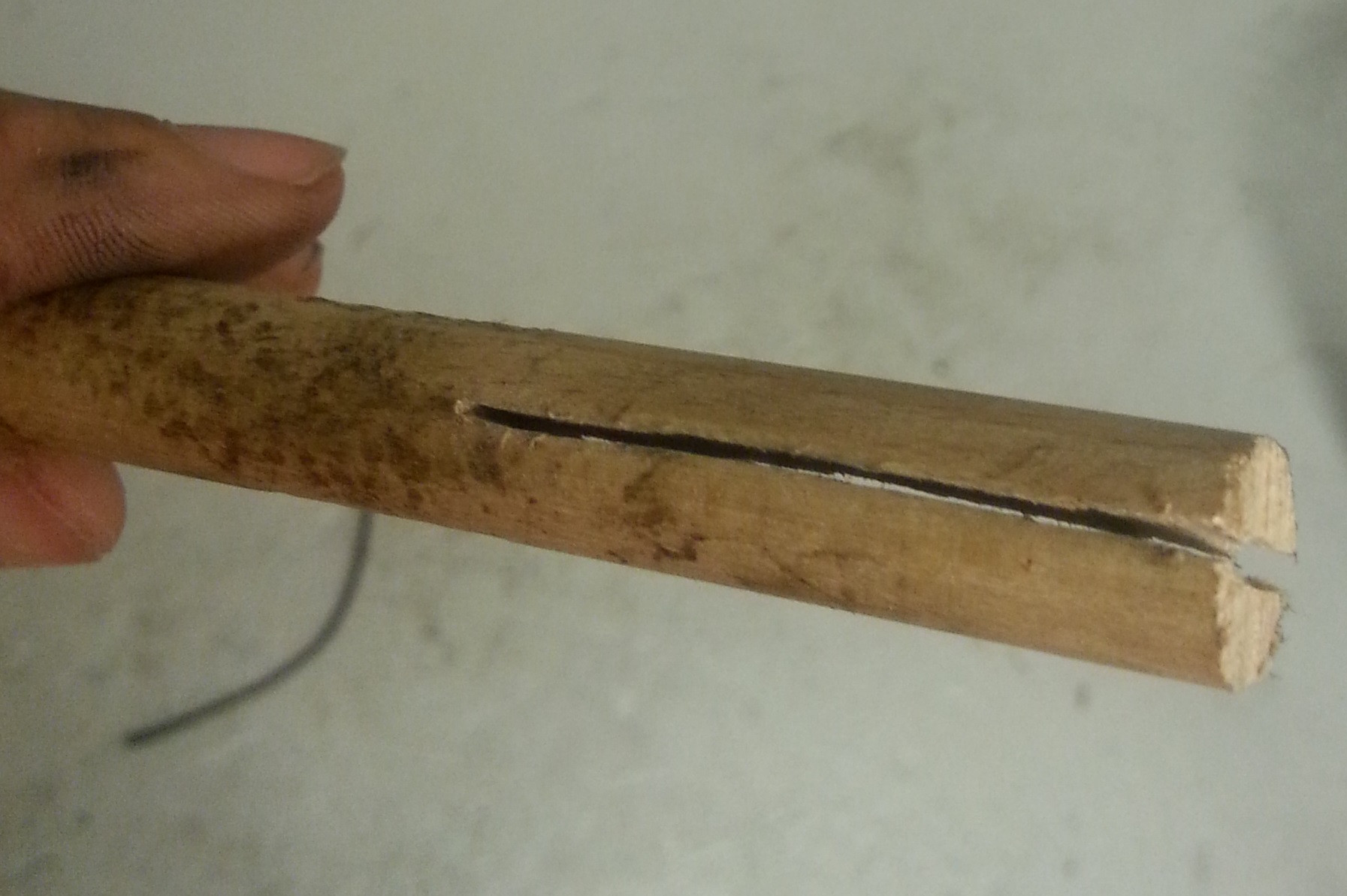 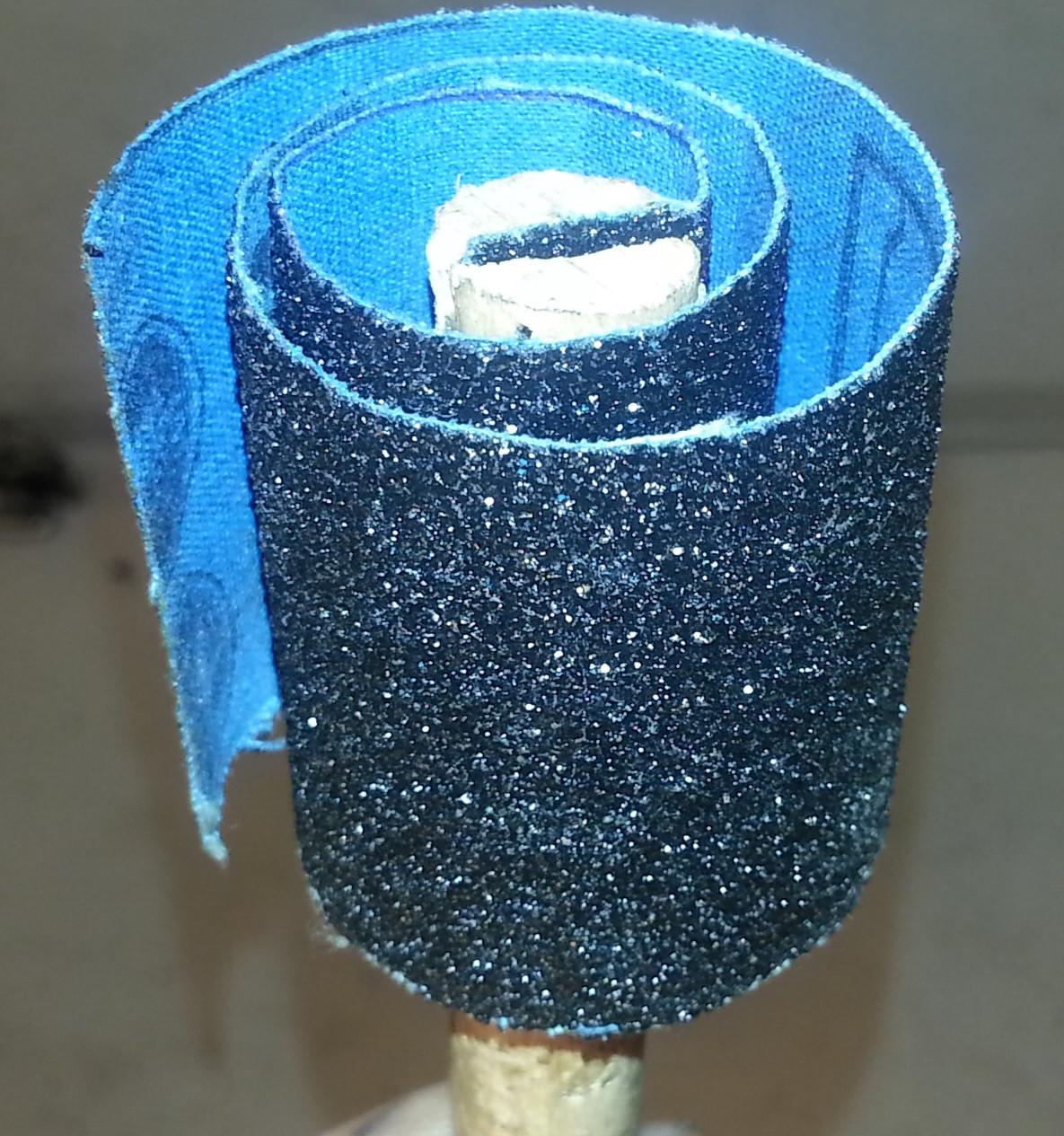 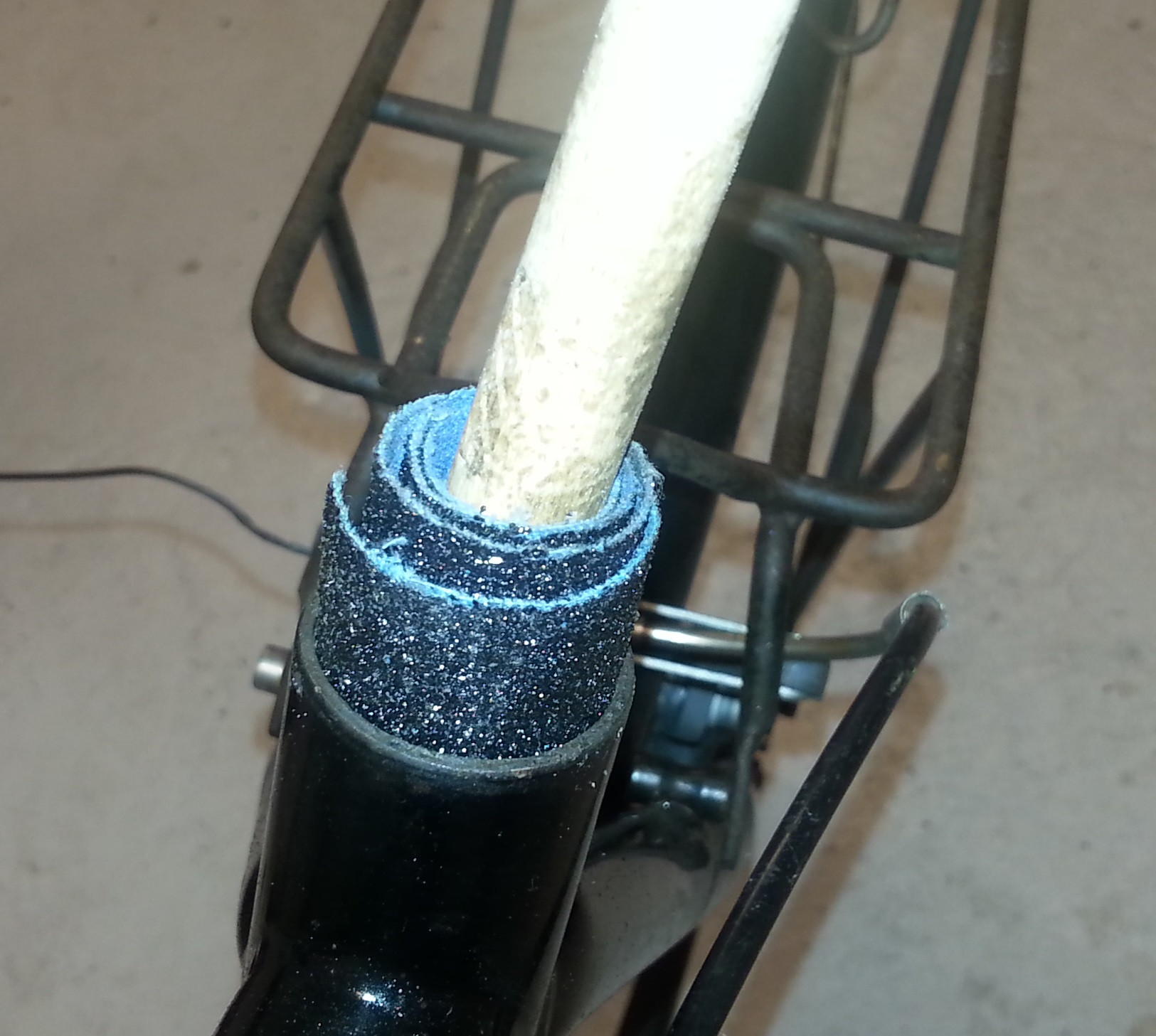 I don't know about the pros/cons of using steel wire, brass wire or emery paper. I suspect that emery paper maybe wears down the material and not just the rust, and moreso than brass and steel wire. So maybe using a brass or steel wire wheel is still a better solution, but I actually don't know.

The only right-sized wire wheel I ever found, which could also be mounted on an extension for the power drill, was this one: link. It's a 25mm brass wire wheel, for 1.6 GBP incl shipping. But it will take a month before I get it from China. I would then use it with an extension like this one (link).

You'll be able to get a surprising amount of this out with a bit of steel wool on the end of a rod (how you'll attach it may require some ingenuity). Afterwards try to clean it out with a rag.

Not the answer you're looking for? Browse other questions tagged maintenance saddle rust seatpost or ask your own question.

16
Should I oil my seat post?
4
Seatpost maintenance : removing rust

23
How do I keep my seat from tilting back?
16
Should I oil my seat post?
12
Preventing rust in bolt heads
4
carbon seat post to carbon seat tube - necessary to loosen periodically to prevent seizing in place?
8
Remove lubricant from seat tube and seat post
3
(Light?) rust removal from chain
5
Bike seat tube is messed up