Does it make you safer to use lights during the day?

My bike light, the Cygolite Metro 360, has a "Daylighting" mode which flashes very brightly and is intended to be used during the day. Similarly, many tail lights have flashing modes. Obviously one should bike with lights at night. But is it advisable to bike with lights on (in flashing mode) during the day as well, to alert cars to your presence? Or does it not make much of a difference? If there are any scientific studies or data on this, please reference.

According to Safety effects of permanent running lights for bicycles: A controlled experiment. (Madsen JC1, Andersen T, Lahrmann HS.) they give about a 19% reduction in crash rates. There's a copy of the paper in Scribd as pdf. Every reference I've been able to find appears to refer to this one study.

The incidence rate, including all recorded bicycle accidents with personal injury to the participating cyclist, is 19% lower for cyclists with permanent running lights mounted; indicating that the permanent bicycle running light significantly improves traffic safety for cyclists

Wikipedia has a few articles, starting with daytime running lights (reports largely positive results) and bicycle lighting which gives a link in Danish that appears to refer to the Odense study above but claims 32% reduction.

Wikipedia Daytime Running Lights links to Google books copy of OECD, International Transport Forum (2013), Cycling, Health and Safety, but I can't copy'n'paste out of it so here's an image: 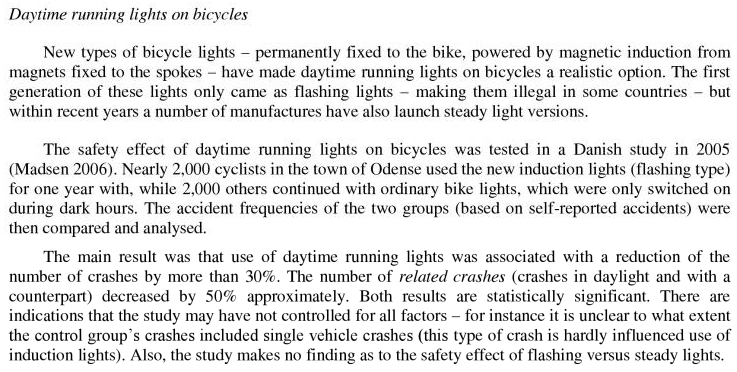 A BicycleForums anecdote resulted in a largely positive discussion, and there's this rant that concludes they're essential. The Australasian College of Road Safety amongst others is strongly support of them for motor vehicles so it's fair to assume bicycle riders would gain something from the practice.

FWIW I'm convinced. I have dynamo lights on my commuter bike that I never turn off (they have standlights so they go off a few minutes after I stop moving).

So, I've done a lot of (non-academic) research on bike lights for this site's community blog and more recently for the bike lights resource site I created, The Bike Light Database. There is a disappointing lack of hard scientific data on bike lighting at all, and essentially none regarding this specific question.

I can tell you from extensive anecdotal experience that a flashing light definitely helps during the day, both forward-facing and rear-facing. A small AAA-powered blinky light won't do much for you, but if you have a high-output light on during the day, drivers give you much more respect. From the rear, they tend to slow down more and pass with a wider distance. On the front end, I'm much less likely to get cut off by drivers pulling out of driveways or side streets who think they have enough time to make it but don't quite.

When Cygolite first released the lights with their Day Flash mode they told me that they had done some studies that led them to selecting a certain minimum brightness for their day flash. I'll email me contact over there and see if I can find out what sort of research they did and if they can share any of that with us. I also met a university researcher who's doing some studies regarding bike lights, although last I talked with him it sounds like it was still a work in progress. I'll see if he's doing any work with daytime lighting and if he can share any of that as well.

However, I think this is a case of "It's not likely to hurt, and anything that makes a driver notice you might help."

(With the possible exception of drunk drivers, who have a bad habit of swerving toward whatever has caught their attention. But there are fewer drunks on the road during the day.)

Will it help enough to justify its cost in batteries? I haven't a clue. Sounds like a great opportunity to run another study, if someone's looking for a thesis project.

A head light addresses cross traffic and head on traffic. Too often vehicles are looking for vehicles and don't see a bike that is in plain site.

My experience is that yes a strong flashing light in daylight helps being seen. I live in a large city that is not particularly bike friendly and I definitely feel it helps.

I took these picture through my truck window in full sunlight at 1:00 PM. This is 400 lumens. 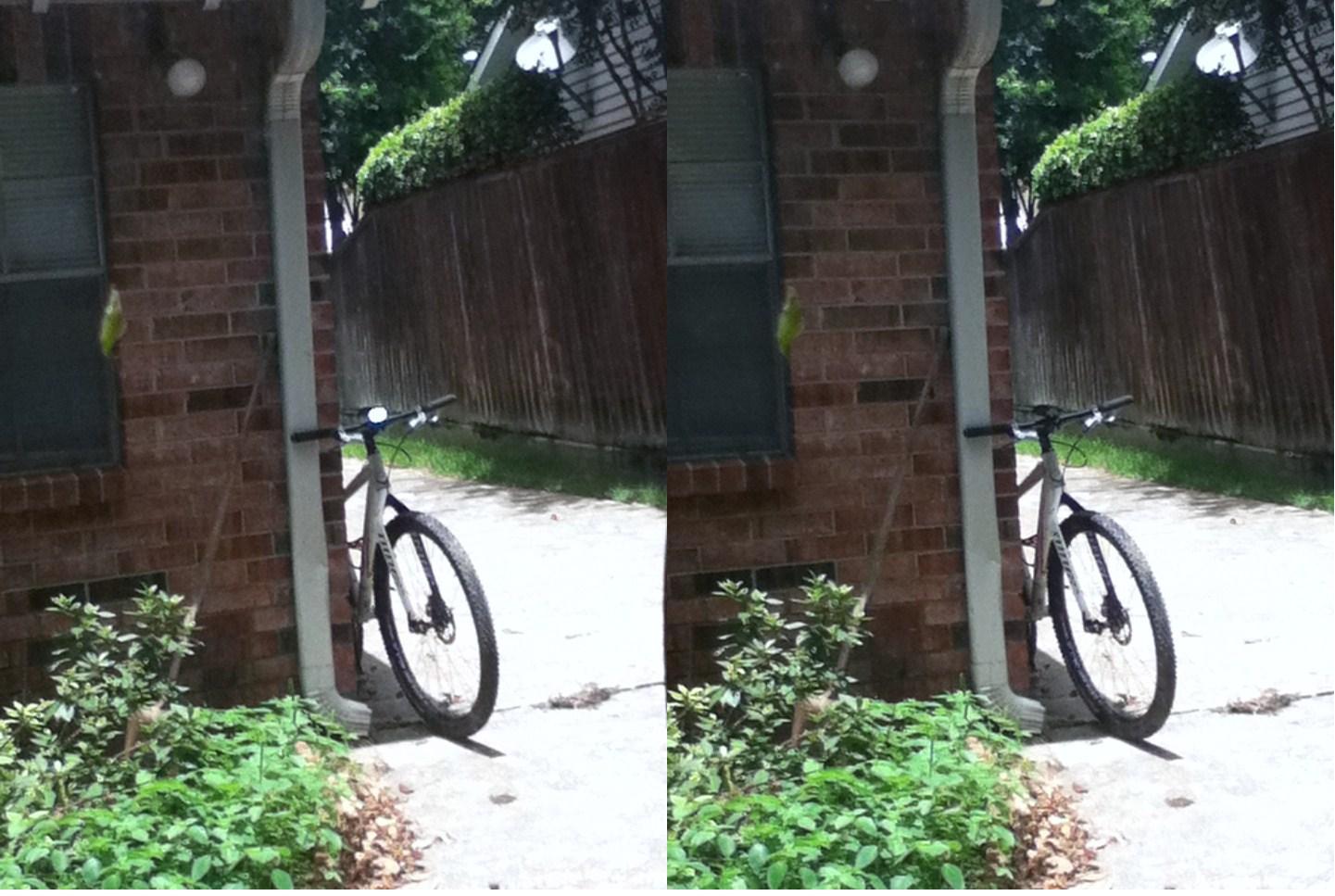 A light is a safety tool. On cross streets and driveways don't assume the vehicle is going to stop and don't assume they see you. I wait for the vehicle to stop and I wait for them to look at me. With a light they don't just see you better it is easier to tell they saw you. They will hesitate on the light and then typically make eye contact. I feel like the super bright makes a difference. They don't just see you - you get their attention.

I know you ask about daylight but at night a powerful light puts out enough light for vehicles to see your light from a cross street.

You might think I don't need a $100 600 lumen light to see the road and at low speeds you don't. The higher power lithium ion led lights we have today I feel are much more effective for be seen.

6
Are there any post 2013 studies available that focus on the use of bike lights during the day to prevent collisions with cars?
14
Should I use lights in foggy conditions?

113
Safety data: Which is safer, head/tail lights which blink or emit a steady beam?
27
Carbon bikes make me nervous. Can you ease the tension?
6
Do cyclists make safer drivers?
12
How can I make myself and bike more visible during the day?
2
Bicycle lights- Indicating in the dark
14
Should I use lights in foggy conditions?
2
How durable are the lights on a Vanmoof?
8
What is the best time to cycle during the day (traffic)?