What is the relationship between tyre pressure and weight?

To give an example of what I'm trying to understand:

What prompts my question is the observation that many cyclists who commute have under-inflated tires, yet have paid a premium for aluminium over steel.

There's also a relationship between total weight and optimum tyre pressure. Vittoria have an online calculator and there's a simpler one here with a link to the papers it's based on. Basically, more weight means more pressure and it's not a linear relationship.

From experience though, increased tyre wear is not a big factor. At one stage I was only riding about 8-9km each way to work so I dropped the tyre pressure on my slick tyre MTB to compensate. Tyre lifetime was still determined by tread wear and didn't seem to drop - it definitely wasn't halved, for example. Bike handling was compromised a bit and I did get more punctures (n~3, though)

{1} this is obviously not true, but it makes the maths possible. The real curve is very complex and specific to a particular tyre. It's also affected by road surface and riding style, among other things.

Start with optimal pressure versus weight. The minimum and maximum pressure are on the sidewall - never exceed that range. Each tire manufacture will typically provide guidelines for where in the that range based on weight and conditions. This is a chart from Michelin. 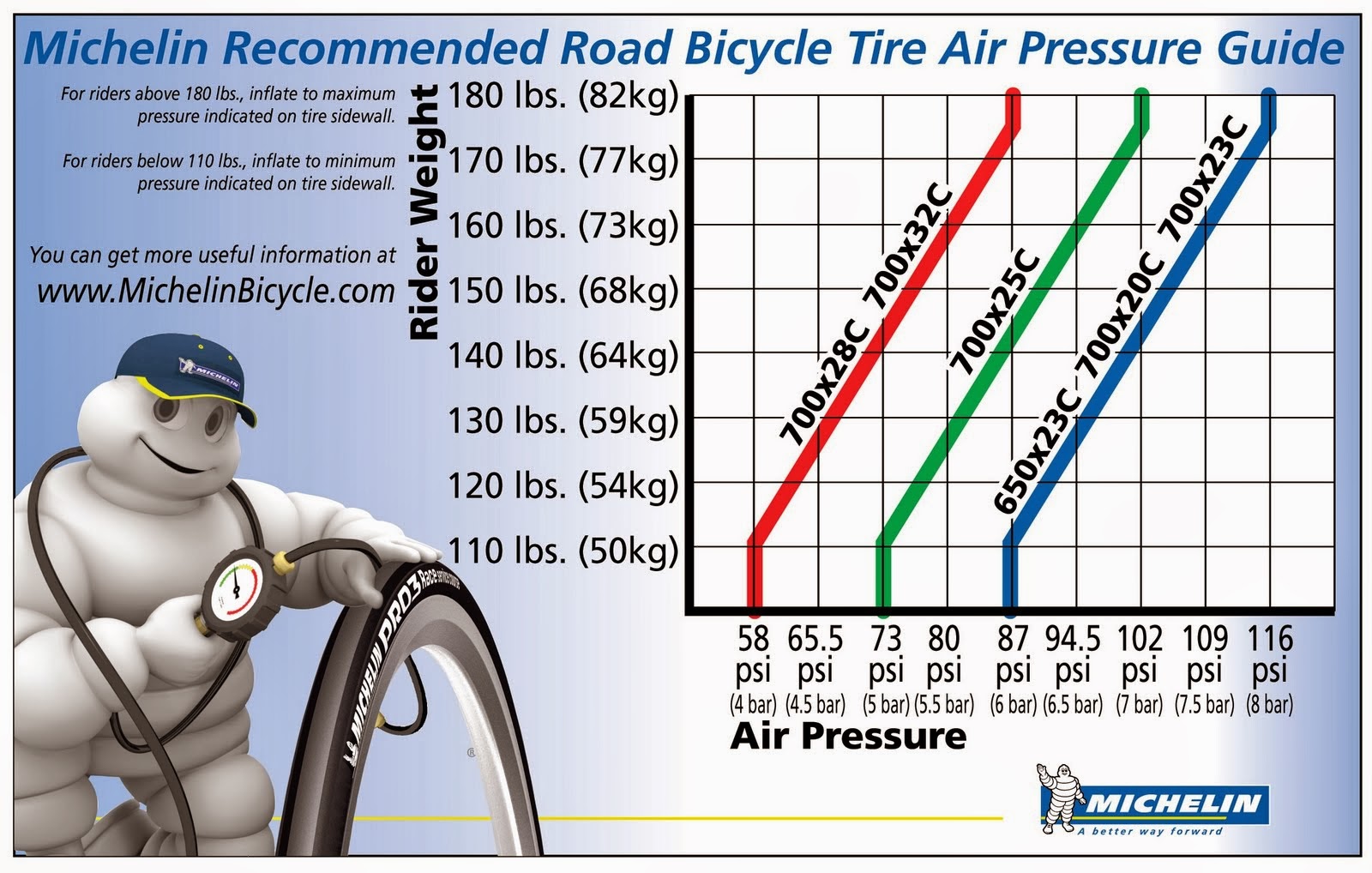 In this chart looking at 700X25c going from about 174 to 128 for a difference of 46 lbs. That is more than the bike weighs. Running a bicycle 20 psi under pressure is significant. Now those two optimal points do not necessarily have the same rolling resistance. The lighter rider would probably have an advantage - but lets call it even in this. Clearly a 200 lb rider at maximum pressure is going to have more rolling resistance than 100 lb rider at minimum pressure. And touring tires and kids tires are is going to have a different weight range associated with the psi range.

I have several bikes and don't have the pressure memorized. And with my old eyes it is hard to find the pressure. I made a table and taped it to my pump.

And anymore aluminum is not necessarily a premium over steel.

14
How much does tire pressure affect the weight of the wheels
3
Does the rear tyre carry more weight than the front tyre?
3
What is the weight difference between frame sizes?
2
Bike weight limits, fatter tyre for more weight?
6
What is the average CdA to Weight relationship of a professional Road cyclist?
0
The difference between thin width of tyre and thick tyre width
3
Relationship between speed and cadence?
8
Is there any relation between tyre pressures and quality of the tyre?
3
How does biking speed correlate with the required effort?