Can I replace my bicycle's dynamo with batteries?

I have a working lightning system on my bike with wired front and rear lights, powered by a dynamo. The dynamo's plastic has broken and I have repaired it several times now, but now it is FUBAR.

Thinking about a replacement, I wondered if it would be possible to just connect some batteries to the dynamo cables. AFAIK the usual voltage for dynamo powered lights is 6 volts, so if I were to add 4 normal batteries (4 x 1.5 = 6) in series, and connect this to the power cables, would it work? Or are there other things to consider?

Both front and rear light are LED lights; the rear light has a capacitor to maintain illumination even when you stop.

I would use a battery holder like the one pictured below, and rechargeable AA batteries, since I have a lot of them already.

If you have any other suggestions on how to do this, I look forward to hearing them!

I want to do this because I have had issues with rim dynamos in the past, and just want a reliable power source; and I am too lazy to install a hub dynamo. It is also a cost issue; I already have the rechargeable batteries, but would have to buy a new dynamo. This is my city bike; it could be stolen at any time, so I do not want to invest a lot of money in components. 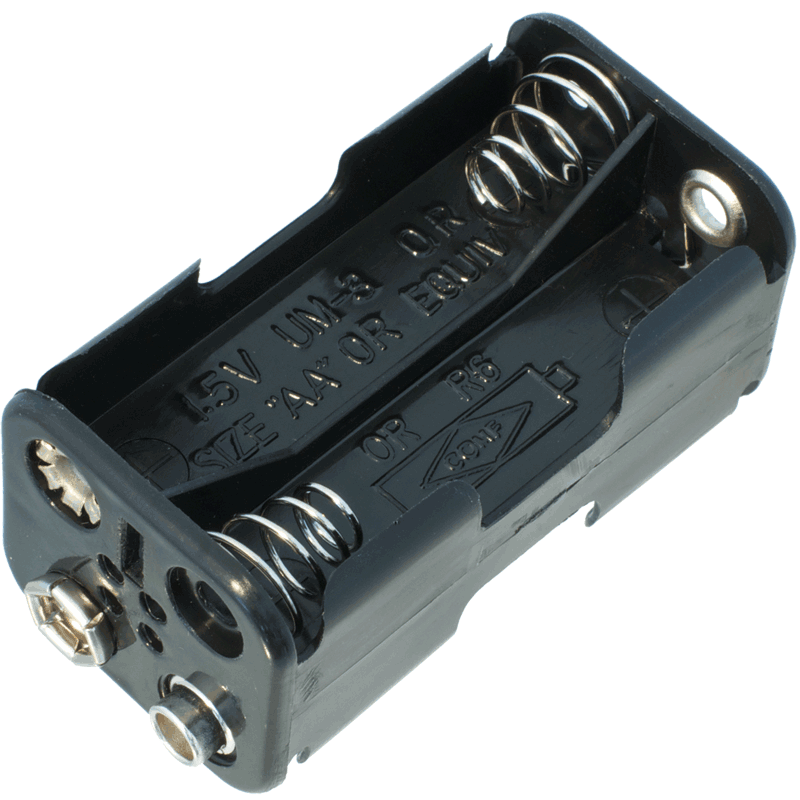 Yes, a battery holder and switch from radio shack would accomplish this. Most dynamos are 6vac and can be replaced with 4xAAs or the 5vdc from a USB pack. You can ignore the issue about polarity as the dyno lights that I've worked are either incandescent and don't care or are LED but have built in blocking diodes and don't care.

Whether you would want to do this is another issue. I've gone the opposite direction and put a dynohub in my commuting bike.

Note: if you are handy with a soldering iron and multimeter, you can remove the diodes/rectifier (and likely super cap) from the LED lights and have them run in straight DC. You'd gain brightness especially when your batteries are running low because you would no longer have the voltage drop of the diodes or rectifiers, but you would need to check polarity and make sure you aren't drawing too much current.

I've done something similar as a temporary setup and had no issues.

I had a new bike with an incandescent headlight, capacitor-backed LED taillight and a cheap bottle dynamo. I took a USB cable, cut off the B plug, hooked up the power wires to the lights and plugged the other end into a USB power bank. I didn't even remove the dynamo – if you do that, the dynamo will get warm and drain the battery faster, but even so the power bank lasted for some 2 hours. I didn't test it for long, though, as I installed a hub dynamo and all-LED lights soon after.

In theory there's nothing wrong with that idea. In practice there are a few things you'll need to consider.

There's nothing inherently wrong with the idea, though, so I'd say go for it.

Or just buy some new lights, which is probably what I'd do. You can get a decent set of LED lights for $20.

Understand that an LED circuit consists of a voltage/current source (dyno or battery), a current limiter (resistor or something more exotic), and the LED itself.

"LED" means "light emitting diode", and a "diode" is a one-way switch -- a "rectifier" that, in other situations, can be used to convert AC to DC. So current only flows through an LED in one direction.

An LED has a "voltage drop" in the "forward" (conducting) direction of about about two volts. This means that no matter how much voltage you attempt to apply (up to the point that the LED catches fire), the voltage across the LED terminals will be about 2 volts, with the remaining voltage being "dropped" by resistance elsewhere in the circuit. So typically, for, say, a 6 volt supply, a series resistor will be added to the circuit to such that the voltage drop across the resistor would be 4 volts at the target current (where V(voltage) = I(current) * R(resistance)). This is a simplistic "constant current" power supply.

Since a dynamo does not produce a constant voltage (it inherently varies with speed), a simple resistance-based constant-current supply is not optimal. So circuitry is likely to include a transistor or two or three to regulate the current in a different fashion. Another approach, where AC power is available (as it is with a dynamo) is to "switch" the power so that current only gets through for part of the AC "cycle". (This is the scheme used by household light dimmers.)

So the issue here is not so much the LED itself, but the associated current-limiting circuitry. A simple transistor-based current limiter will probably work fine. A "switching" scheme will likely fail to work properly when fed DC, and there is some chance of circuit damage.

I just can't think of any reason for your idea not to work, but to be sure, carefully examine both the dynamo and the lamps looking for any identification of operating voltage.

Otherwise, do a search for your Dynamo and light system specifications. If none of these yields any results, then, if you are unsure on voltage, do a simple test with pieces of wire and maybe electrical tape, adding batteries one by one until the brightness of the led resembles its normal level when connected to the dynamo.

LEDs are not supposed to be connected directly to a power source without a resistor in series, but it is almost sure that this resistors are already in place in the circuit board inside the lamp units, so I would not worry at all.

Not the answer you're looking for? Browse other questions tagged conversion battery or ask your own question.

8
How do I know if I can replace the 27 inch wheels with 700c wheels on my bike?
6
Can one replace double chainrings with a singlespeed chainring on the original crankset/spider?
3
Can I secure a 12v battery to my bicycle to charge it? And then attach a 12v horn to it?
4
Bicycle computers with nonvolatile memory
9
Charging eBike Battery with Solar
11
Fortified Bicycle appears to gone out of business -- where to get one of their replacement bike light batteries?
2
DIY ebike: what system to choose for adding space between frame and battery?
0
eBike: use 48v motor with 36v controller and battery
2
Why are there no/very-few bicycle-specific lights with replaceable 18650 Li-Ion batteries?