What is best for which use, advantage, or application, especially for climbing.

Believe it or not in the range of lengths you are looking at there is very little scientific support for there being any real discernible differences in performance (both in absolute power and metabolic efficiency). For the lengths you are considering I would suggest this is largely a personal preference choice.

If we are concerned about maximal power output, there appears to be no significant difference for the crank length range commonly (Martin and Spirduso 2001). The study used 16 male cyclists were tested for maximal power across crank lengths of 120, 145,170,195, and 220mm. Only the extreme (120, 220mm) showed a significantly lower maximal power, but the effect size is small (around 4%). 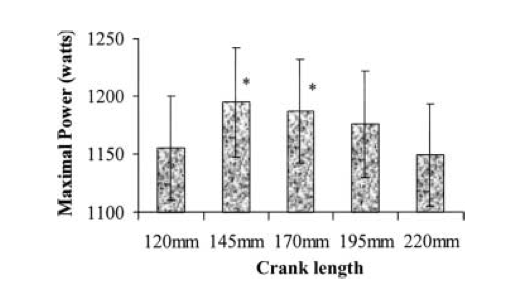 Figure 1 - Maximal power as a function of crank length (reproduced from Martin and Spirduso (2001)). Be careful of the Y-Axis scale, the effect size is actually small and error bars are large indicating a lot of individual variability.

Martin and Spirduso (2001) also attempted to create a formula for optimal crank length based on fitting a 2nd-order polynomial regressions to the subjects best power (response) as a function of the ratio of leg, tibia, and femur lengths to crank ratios (think inverse U cuvrve). Leg and tibia lengths had support ($R^2$ of 20.5 and 21.1%), but the effect size was small (around 3%) and the relationship had a number of outliers. That said, the regressions suggested a crank length that is 20% of your leg length or 41% of the tibia length.

As a side note, in terms of effect size, you can gain 5% through gear selection, using larger cogs (see Spicer, 2000).

Most cyclists are not producing maximal power on their ride. Instead we tend to spend most of our time at sub-optimal output levels. In this case we might be more interested in the metabolic cost of cycling, and optimize the setup to be the most metabolically efficient. McDaniel et al 2002, investigated the impact of a number of factors (including crank length) on metabolic cost. 9 cyclists were used in the study. A smaller number of crank lengths were used (145, 170, 195 mm) compared to Martin and Spirduso (2001). Pedal rates were also investigated (40, 60, 80, 100 rpm).

Overall, mechanical power strongly predicted metabolic cost (R^2 = 0.95; not surprising) and the authors used the metabolism residuals (left over variability) to investigate the impact of crank lengths, pedal rates, and pedal speed. The used step-wise regression to attempt to build the best descriptive model (personally I think small-sample sized corrected AIC ranking would have been more appropriate). They found independently each had some descriptive power, but overall the best descriptor was pedal speed (combination of crank length and pedal rate (cadence)). Once pedal speed was accounted for the other factors (e.g., crank length) provided little descriptive power. Note that all of these factors will be related (i.e., multicollinearity) so it is not surprising on their own there would be some descriptive power.

In terms of metabolic cost, it would seem your pedal speed is what matters. To quote the author:

The main finding of this investigation was that mechanical power output and pedal speed accounted for 99% of the variation in metabolic cost at intensities below LT.

Note that LT stands for Lactic Threshold (aka maximal aerobic capacity). More importantly, they follow up and state (emphasis added):

Mechanical power output alone accounted for 95% of the variation in metabolic cost, suggesting that, even with our wide range of pedaling rates, pedal speeds, and crank lengths, muscles’ ability to convert chemical energy to mechanical work was remarkably stable.

The take home is our body will adapt to the commonly used crank lengths, so you need to select base on other factors. While some will argue that performance gains are possible, these for the most part appear to be small, on the order of small drive train efficiency gains (e.g., using larger rear cog; see Spicer, 2000). A common theme to me is that individual variability seems to be a much larger effect, therefore you will need to consider your personal situation.

If I had to suggest one potential selection criteria I would suggest considering if you like to spin or mash your gears. If you like to spin, you will likely want a shorter crank length so you can turn your legs over faster. If you like to mash, a longer crank length will likely feel better as you have more leverage. As an aside, spinning can also be more efficient as you tend to use a larger cog in the back, which is known to be more efficient (Spicer, 2000). Why on earth modern cassettes use such small cogs I have no idea! I suspect weight at the cost of efficiency.

Other SE questions covering this subject.

A good summary of the science, in a readable format, is available on the Cervelo website:

Not the answer you're looking for? Browse other questions tagged road-bike crankset or ask your own question.

24
Selecting the right crank length
14
What is the effect of changing length of crank arms?
11
Why such a tiny difference in crankarm length?