How have you setup your tri-bars?

I'm getting some tri-bars for Christmas and I've been told by the bike shop how to set them up on the bike, but I'd like to get some tips from lots of different people. Up-close photos would be great. I've got the straight type of bars.

Sorry, I should have specified a few more details. I'm particularly looking for details on arm rest positions (placement infront or behind of the handlebars and distance between each rest).

The answer to your question depends on the rider physiology, goals, and objectives. There are a number of considerations, and the focus should be on your overall position.

If you are primarily a time-trialer, or if you are interested in triathlons, you would have different needs than a road racer who does a handful of time trials a year. Triathletes tend to be even further forward than road racers.

When I used the same bike for racing and time trialing, I would raise the seat, push the seat forward, and lower the stem when I added the time trial bars. Being comfortable and having the ability to take a breathe easily and fully is much more important than aerodynamics per se. Also, note that the pros spend a lot of time preparing for this. In general, imagine a time-trial position as the body being rotated forward at the hip about 15 degrees, so that the hip gets closer to the bottom bracket. Also notice that much of time trialing is done on the nose of the saddle (not sure exactly why).

If you look at the pros, you will see some general trends in position. The arm rests are many cm below the seat, the forearms are relatively horizontal, and some prefer to have their hands a little bit more elevated, some at a negative incline.

Generally, the seat is forward and the rider is on the nose of the saddle. The distribution of weight between the seat and handlebars goes much more in favor of the handlebars than when riding in a standard position.

An important aspect of the position is the difference in height between the saddle and the elbow pads. The lower you can get the more aerodynamic you will be.

In addition, notice that the upper arm may be perpendicular to the ground, like Fabian Cancellara here: 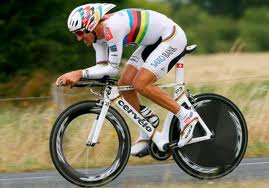 Or like Kristin Armstrong with the elbows further out in front of the shoulder: 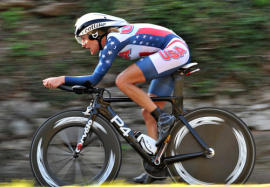 The position of the arm rests have moved back toward the elbow over time. Greg Lemond's position had the arm rests closer to the wrists than is common now. This position is useful in a hilly time trial because of the leverage that it gives. 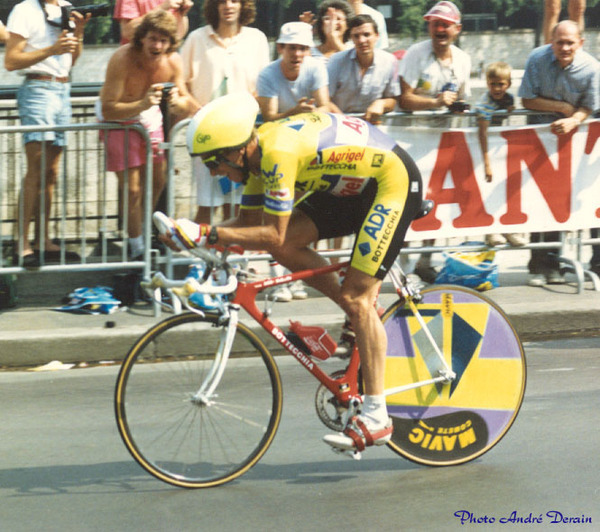 Not the answer you're looking for? Browse other questions tagged road-bike handlebars bike-setup or ask your own question.

12
How is the width of drop bars measured?
4
Tri-bars/Aerobars on Mountain Bikes
1
Cube Agree GTC - Tri-Bars
6
How do I setup these brakes?
6
How to reduce vibrations to handlebars on aluminium road bike
0
Upgrade options for hybrid Scott Sub10 bars?
7
Why/how did flat bars take over?
4
Would Tri-Bars be advantageous for a 260 mile 2 day event
8
Aero bars are a pain in the neck - are there strengthening exercises?
5
Help in converting Trek Domane 2.0 road bike to be more comfortable and commute-friendly