How to move a bicycle by bicycle

I need to move two bicycles from work to home. The route is 5 miles long and car free. My only means of transport is to ride one of the bicycles so my question is this: What is the safest way to get both bikes from work to home in one journey? (without some kind of trailer)

I do this from time to time (usually when one of the kids have 'forgotten' their bike), and find it easiest to do as pr above, but with a little variation.

If one bike has a rear rack, you can attach the second bike's front wheel with a bunch of bungies and tow it. I've done this, and it worked fine.

Now I have a cargo bike, and the towing is simpler: 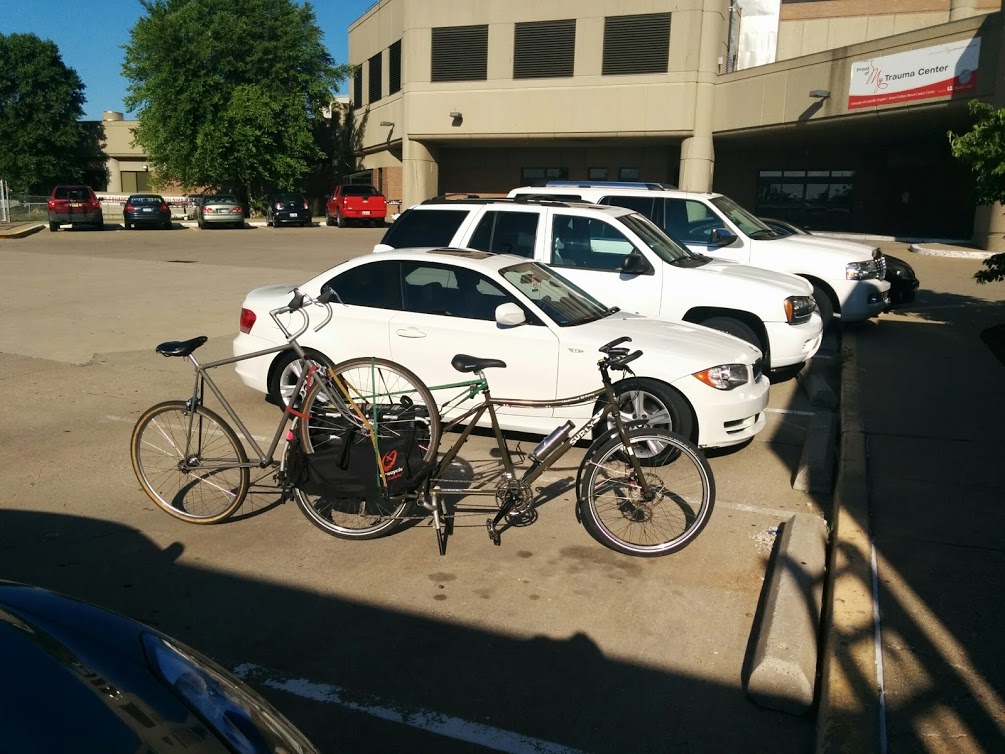 If you are reasonably firm at riding one-handed, you can drive them home by riding one of them while pushing/pulling the other one beside you with one hand.

Let's assume that the bike you will ride is called A and the one you push/pull is B.

First decide, which bike is better to be ridden and therefore will be your bike A and which hand is better to get freed to steer bike B. Which hand is better will depend on if you will need to change gears and how your brakes are arranged on the handle bars. Then lean bike B somewhere, e.g. to a tree or wall – putting it on its stand is not so good as it might get complicated to get the stand folded in later. Also make sure to lean it on with the correct side, depending on your choice of which hand you want to use to steer it. Finally mount bike A and place yourself on the bike beside B.

Now grab either the stem or the center of the handlebar (where it is held by the stem) of bike B, such that you have some steering control over the handlebar if you twist your wrist.

The most complicated part in this is starting as you will have some wobbly moments on the start and you have to take care not to interfere with the handlebars of both bikes. Having drop bars (as in your case) will make things a bit easier in terms of interference as they are not that wide and it is easier to keep both bikes separated. Also you have to take care to not lean onto the wrong bike, as putting your weight on bike B will make it go somewhere more or less unpredictable and you're quite likely to crash. So only put your weight onto bike A's handle bar.

Once you have the whole train running, this arrangement is quite fine (albeit a bit clumsy) as long as you don't have to cope with too much traffic (which is given in your case). However, 5 miles is some piece to ride this way so expect to be somewhat slower than normal and plan to do some pauses on your way as you won't have a very relaxed riding position.

One possible way is to ride one bike and push the other. One hand goes to handlebars and front brake, the other grips the second bike by the handlebar stem.

This is slow and clumsy, of course, but if you are able to ride the said route with no hands, you should be able to move both bikes as well.

Ghostride it, so long as you're not dealing with high speeds or heavy traffic: http://www.instructables.com/id/How-To-Ghostride-a-Bike/

And make sure you have a soundtrack:

Ride one bike, and have a friend ride the other bike. Once home, give friend a beer and say "thank you, see you tomorrow."

I'd walk with both bikes - with each hand on their seats, one to the left and other to your right.

Bicycles can be easily pushed and steered when holding them at the seat (in the same manner as you would correct steering when riding without hands, through the balance). I find it easier than pulling them by the middle of handlebars as others suggest.

Doing so with two bikes at once is tricky, and this is slower than riding; but it's safer and you'd get there in the end with no risk of falling yourself; at worst you'd have to stop and readjust them a few times.

Personally I enjoy running as much as riding. If I could not carry the second bike I would ride one home, run back, ride the other home. It would take a bit longer and be a great workout.......

The question rules out a trailer in this case, but it's not hard to do, so here it is for completeness.

The trailer below was converted from a child-carrying trailer, with a length of aluminium extrusion on top and straps. That's a 24" wheel kids bike behind my commuter, and it handled very well on a test ride. It's not quite finished (I'd like dedicated straps riveted to the frame), and eventually it will also be able to take cargo.

If transporting an adult bike it would be a good idea to lengthen the drawbar otherwise the overhang behind the trailer axle gets very long. You could also turn the handlebars so the front wheel of the towed bike can be closer to the back wheel of the towing bike without risk of hitting it. I may still do that but it requires a slightly more complicated way of holding the bike upright on the trailer

My friend was able to ride a few miles with a second bike attached to his backpack with a ropes. You need a wide road for this way of transportation and it can be tricky to tie bike in such a way that it doesn't weights to one side. Also, you can detach wheels and tie them to the frame, so bike will be more compact.

I am contemplating this - fit a "truck bed front fork clamp" to the parcel rack on my electric bike and tow the other bike. Have to remove the front wheel and strap it on the towed bike's frame.

Possibly could get away with an old front hub sans spokes, and clamp that onto your rack or even the rear seat stay of teh front bike. Have to watch the clearances of course, left/right turns as well as up/down.

300mm velcro cableties will be used to strap towed bike's front wheel to the frame.

Edit: I did this and it was not a success. Complete write up in this answer

done this from time to time normally to impress a girl who had left her bike somewhere. Ride one bike with one hand, hold the middle of the handle bars (2nd bike) with your off hand, Hopefully you can ride with out hands as you will need to go no handed briefly to access the brake on the main bike.

thatguythatguy
1
3
Add a comment  |
Highly active question. Earn 10 reputation (not counting the association bonus) in order to answer this question. The reputation requirement helps protect this question from spam and non-answer activity.

Not the answer you're looking for? Browse other questions tagged commuter advice or ask your own question.

33
What headset/radio products exist for bike-to-bike communication?
4
Sport Hybrids For Commuting and Exercise?
12
Is it legal to pass a car on the right when that car is turning?
1
Help to choose the right bike multipurpose bike
11
Hybrid electric bikes, how do they work?
6
Can a beginner cyclist commute ~40km (round trip) to school/work by bike?
54
How to commute to work on your bike and dress up
8
Motorists misjudge bicycle speed
20
How can I keep improving after my first 30km ride?