If I were to build my own Lemond Revolution style turbo trainer (link below) could I use the air speed in meters/second^2 the rider is moving into as a good indicator of what type and size of fan to use? 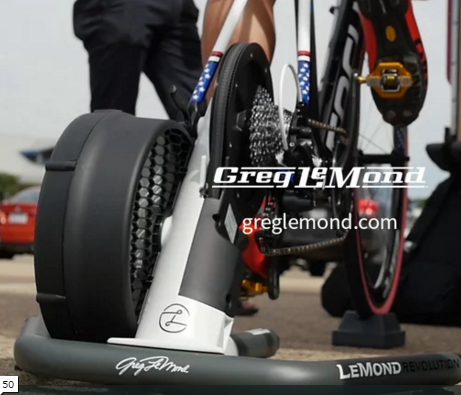 Or put the other way around could I use the indicated airflow that is moving through the fan at a range of revolutions per minute to provide similar resistance to what is found outside, resistance increasing with the cube of speed?

Would this information be enough to begin building, experimenting and testing fans for a diy turbo trainer?

If the fan has an aero map which states its lb/min in airflow at a given rpm (which is within normal cadence of a geared bicycle) is this a good indicator of potential resistance that is will provide (once converted from statute to metric)?

So analyzing exclusively the wind force while riding will cover a large part of the picture but leave some of it out. The best way to mimic the force of riding a bicycle is to match the kinetic energy (or moment of inertia).

You can achieve this result in many ways (mathematically indefinite), as you can either have a huge fan that will spin very slowly, a small fan that spins very quickly, or anywhere in-between.

So any type of fan will work, you just need to manipulate the gear ratio between the crank and the fan so that it matches the energy of the rider. Butt I'm a little confused on the site saying air speed is in m/(s^2) since speed is m/s, and would not use that as the metric for the rider's resistance since it doesn't factor in all resistances felt while riding a normal bike.

This all being said, if you have access to an electric motor you could tie into the fan (with controllable output), you could output wattage of an average rider (or your wattage), see how fast it spins, then using gear ratio calculations between the crank and the fan, see what ratio you'd need to achieve this speed. Any small errors in calculations could be compensated by the ability to change gears so they wouldn't be noticeable.