As pictured, after knocking over the bike I've broken one of the plastic surrounds where the gear cable enters the front derailleur shifter. Shifting between the lower two chainrings still works, but when trying to shift to the outer ring, the cable tension is sufficient to pull the cable into the crack/gap and prevent the shift.

Is there any way to repair this, or have I written off an entire set of STI shifters? Do Shimano sell spare parts for their STI levers? (If not I'm thinking of going to bar-end shifters if STIs are so fragile!) 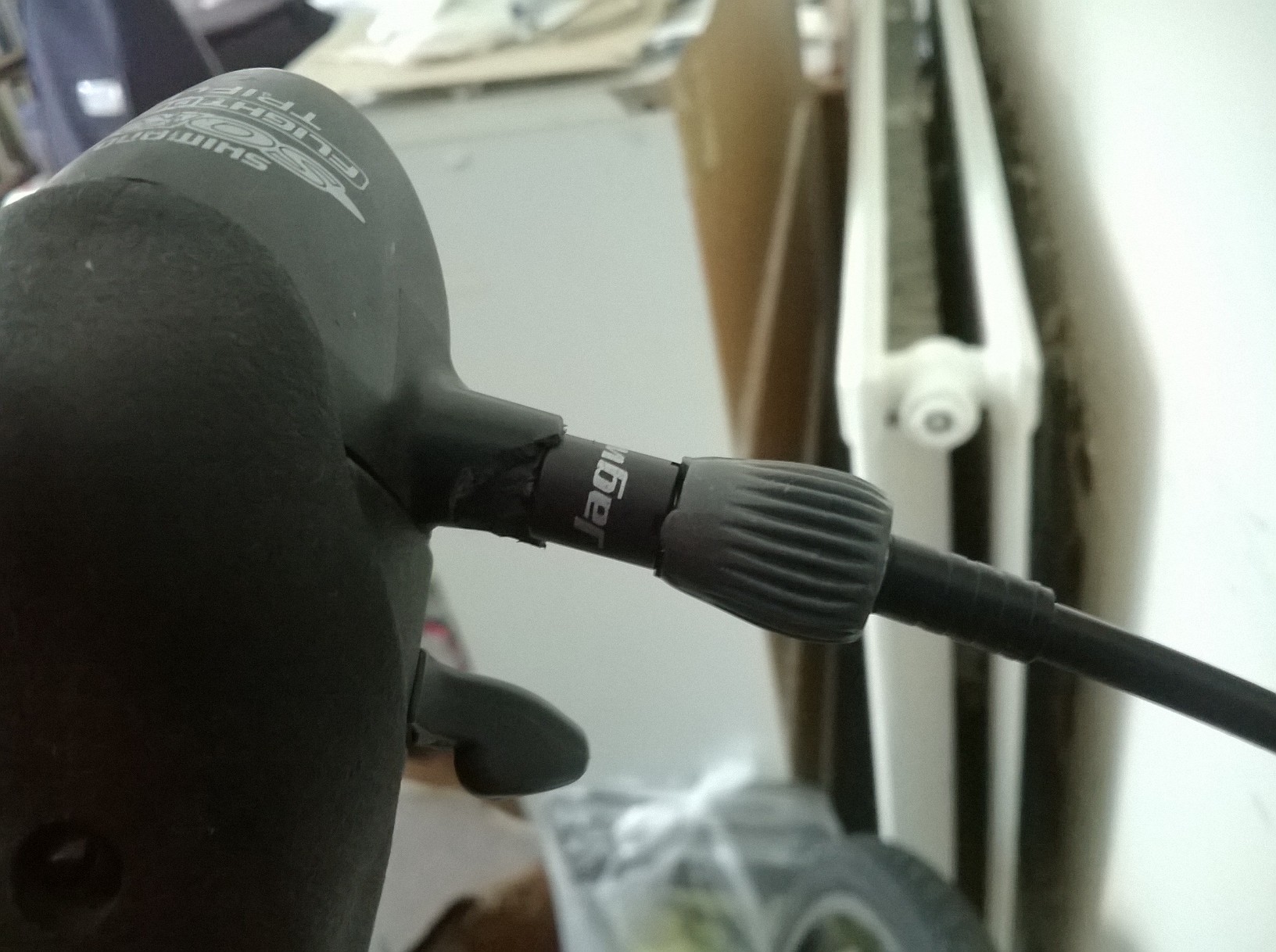 Most shops don't carry spare parts for STI shifters. Most problems are internal and even if you can get spare parts, the cost in labor to replace most things (except clamps, hoods, and name plates) coupled with the cost of the spares exceeds the cost of a whole new unit.

The piece you need is called an outer support unit. Shimano does have part numbers for individual pieces like that, but in general, you'll have to go direct to Shimano to get them. The biggest bike distributor in America doesn't have them. This makes them a little harder to attain.

And then there's the other problem: you have old Sora components. Generally, Shimano engineers new stuff and drops support for the old, at least when it comes to spares.

That being said, you might look around but I'd say you have an incredibly small chance of finding the replacement part.

Not too mention, as I implied earlier, it's not trivial to replace things on STIs. If you're willing to take it on, you'll generally be on your own, as few shops do such repairs.

If you're ambitious, I'd just try to find a broken shifter that you can scavenge the piece from.

Another thing you could do is hack it. Fabricate a sleeve to cover over the housing stop that goes as far as your barrel adjuster. It might just be enough. Make sure the inner diameter is as close as possible to the outer diameter of the stop. I'd suggest something that isn't going to be too annoying if it rattles, which it probably will. This is one case where carbon fiber might be useful! ;-)

If you use this for competitive purposes, professional (on Sora? Probably not), amateur, or just for fun, I'd suggest STIs. Otherwise, bar end shifters are a technology that has been around a long time. They're simple and anyone can figure them out. Plus, the friction mode is very useful. I'd give it some serious thought if you don't mind moving your hands off the lever to shift.

If expoxy doesn't work, you won't need to replace the complete set.

Left-hand STI shifters (for front derailleurs) tend to be more durable and reliable than right-hand shifters, Front derailleurs are used less frequently than the rear. As a result, left ones are easier to find and cheaper on eBay. Right now there is an "almost new" LH Sora ST-3304 on eBay for $30 and a new LH ST-2303 for $20. Broken "for parts only" shifters also pop up on occasion.

There are also sellers on eBay who repair older 7-8 speed STI levers. You might try contacting one of them.

Not the answer you're looking for? Browse other questions tagged repair shimano shifter or ask your own question.