What are the advantages of 4 arm cranks for road bikes?

Are 4 arm cranks the future for road bikes?

What are the advantages?

With a unique four-arm spider and Hollowtech II construction putting strength just where its needed, the FC-9000 chainset sets new standards for stiffness and low weight. 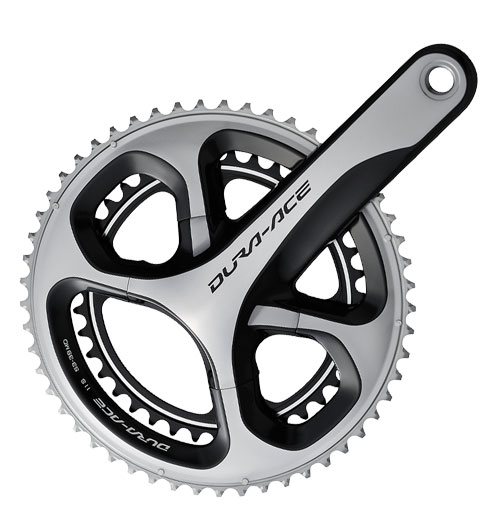 That and because I think it looks distinctive and is seen as innovation. Some people don't like the look, but weight weenies will snap this up.

On the web I found the following comparison: (weights are combined chainset and bottom bracket)

As with other Shimano releases, the technology has already trickled down to Ultegra and 105.

Shimano is just an example. As andy256 commented above, Campy also has this and maybe others.

Road groups always used to have 5 arm cranks since the 70s or so. Early MTB too but then in 110mm BCD (now compact road). Since MTB rings are smaller, it made sense to move to 104mm 4 arm spider, while larger road rings would be less stiff on smaller BCD. For compact road 50T rings smaller BCD makes sense and is needed for 34T inner rings. I guess aesthetics, need for granny (inner) ring and distance from middle line of frame are main reasons to have separate MTB and road compact crank designs.

4 arms can be made to be lighter than 5 arms.

Since there are only 4 arms it stands to reason that they are shorter since supporting a distant chainring with so few arms is difficult. The arms have to be fatter and or shorter. Shimano's four arm spiders are both fatter and shorter, though a lot of the "fatness" is due to the fact that they are hollow.

Now that the spider is smaller, it means that the chainrings, especially in the standard sizes have a greater internal to external diameter difference (fatter doughnut). This means that in Shimano's design they are now no longer just plates of aluminum but three dimensional aluminium moldings with lots of splines on the back, since in a sense the job that the spider did, of holding the teeth rigid in the left right plane, is now shared by the chain rings.

This diffuse design, is closer to a sort of monocoque design, where all forces on the chainrings are shared throughout the assembly. The almost monocoque crank+chainring assembly is a marvel of engineering.

But really I don't think it was necessary to anyone outside of the pro peloton. However, the innovation means that Shimano can charge 60 USD or more for their molded, splined 3D chain-rings which are a part that inevitably wears out.

Additionally, on the economic front, while flat chainrings can be made by anyone, with the four arm design we are somewhat tied into purchasing a Shimano chainring every 10,000km (?). There are some flat 110 BCD standard chainrings but e.g. oval ones, but I am not sure about their flex/stiffness. They also do not match up to mate with the three dimensional 4 arm spider but sometimes they are sold with pieces of plastic to blend them into the cliff of Shimano's 4 arms.

The 4 arm plus three dimensional Hollotech '3' (They are Hollowtech 2 but, in sense the third ? iteration) are super stiff and super light.

I cycle a lot and am growing sick of paying 60USD for a replacement chainring, or leaving longer and getting chain slip (losing my chain off the outer worn chainring) so I think I am going to move back to 5 arm Hollowtech 2 Ultegras. I did not notice the flex when I used to use them.

I thought I would be able to just about tell the difference, but I could not when I tried them last night and this morning.

Flat 5-arm chain rings are very cheap. I am using an old bio-pace that was about 12USD. There are now quite a lot of 130 BCD standard chainrings on sale on aliexpress. 110 BDC standard chainrings are rare, but 50-34 are available both at about as low as 20USD for a pair.

1
Are road cranks less strudy than comparatevely priced MTB cranks?
3
What can I do to stop my front dérailleur rubbing against the crank arm?
6
Wobbly splined cranks, yet bolts are very tight
3
Is my bike capable of swapping for longer cranks?
2
How to tighten the Hollowtech II (on R2000 Claris) cranks?
1
Replacing BB, but found mountain + road cranks and am confused
8
What are the advantages and disadvantages of the different chainset designs?
1
Changing arm length for DUB crank
0
Are all DUB cranks compatible?
1
Do I need to replace bottom bracket and/or cranks for road-to-fixed conversion?