I mostly used conventional sneakers for cycling and never wore bicycle shoes in my life. At this moment of my life I decided to level up a bit. I've built myself a road bike and now I'm looking into proper footwear. It's a whole new world for me and I'm completely lost. My first impression is that there are several types of pedals, cleats and shoes and you have to choose the right ones in order to fit them all together.

I'd really appreciate a brief consultation on how to choose a proper footwear gear. Which pedals play good with which shoes and/or cleats and how to buy the right combination?

Thanks guys! You're the best!!

Assuming that you're talking about cleats on your shoes, there are three main attachment systems. 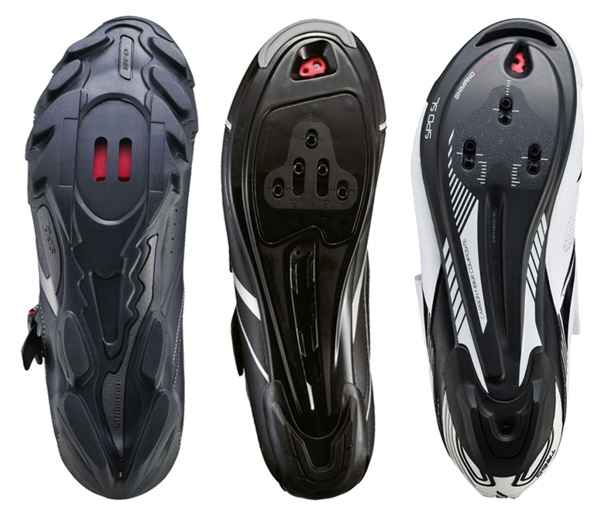 Notice how the one on the left has a chunkier sole. The two-bolt option is used for SPD which are popular with MTB, commuting and touring cyclists. I use 2-bolt SPD shoes on my audax bike because I'm able to walk in them without slipping over or damaging the cleats.

A comparison of the different pedals has already been covered thoroughly on bicycles.SE, and Wiggle also provide some friendly explanations.

Yes there are lots of different options with pedals (it's a bit easier with shoes), but they can be summarised quite briefly.

These days, using clipless pedals is very common, although there is still debate as to whether it is the most efficient setup. Terminology is also confusing here - strictly speaking this type of pedal is called clipless, yet we talk about "clipping in" and "clipping out". It sounds a bit silly at first, but something you soon get used to.

Clipless pedal systems use a special pedal, plus something called a cleat. The cleat is is attached to a special shoe, designed specifically for road cycling, using some bolts, and the pedal and cleat basically bind together to secure the foot. For the most part, cleats will fit any road-cycling shoe, but there are exceptions here so it is something you need to check.

Where the options come in here are as regards the pedal/cleat combination. As you might imagine, several companies have come up with different takes on this. I will not give an exhaustive list of these companies, but to name a few, the mechanism was first developed by the French company Look (as soon as you take an interest in pedals, this name is unavoidable and they are still big players). At some point later, the world's largest cycle component manufacturer, Shimano, got in on the act with their SPD-SL mechanism. As I say, there are several others.

But to stress, these mechanisms are much of a muchness in terms of what they do, so choosing one over another is mostly down to personal preference. As you might imagine, though, one manufacturer will deliberately make their cleat/pedal tech different to other manufacturers, so in general you can't mix and match brands. (Although there are exceptions here too, you see some "Look Keo compatible" cleats on the market). But generally, this incompatibility also applies to different ranges within the same brand. For example, Look have two ranges (Delta and Keo) which are totally incompatible with each other. So you can see, you do kind of get sucked into a particular choice....

Beyond this, still with clipless pedals, you can control how much you allow your foot to move on the pedal whilst riding. SPD-SL and the Look Keo range support this, possibly others too (as @JohnP says, this is called float, and there are other questions on this site that give you an idea why you might choose one float over another).

So, yeah, a complicated issue. My own history was that I first bought into the clipless idea, then just plumped for SPD-SL on the grounds that most of the components on the bike were also Shimano! Nothing more scientific than that. I've since changed to Look Keo (because I bought some special pedals that required me to do so) but have noticed no practical differrence whatsoever. So, take your pick!

Not the answer you're looking for? Browse other questions tagged road-bike pedals shoes or ask your own question.

18
Can someone give me a short description and comparison of the different road cycling pedal / shoe systems?

5
Most Crucial Gear/ Accessories for a (Road) Cycling Beginner?
7
Pedals and cleats compatibility
10
How often should I change my mountain SPD bikeshoe cleats?
6
Clipless pedals: Why clipping in so darn difficult?
3
Lightweight foldable shoes for road cycling
0
How To Choose A Proper Sprocket Combination For A Road Bike Cassette?
2
Foot shifting while pedalling
3
How to adjust cleats to lower pain in the right foot's last two toes
5
I am a big guy who wants to buy a race bike