How to transport bulky things on a bike

I am a hobby musician and would like to transport my instruments on my bike because there are just a few parking lots and it is too far to walk.

Is there a good and safe way to carry a trombone, several stands, and sheet music on a normal bike?

This is quite tricky, given a trombone is not a nicely shaped instrument. You can try some larger racks, or mount some plywood or something to a smaller rack to try to get a more stable surface to carry the trombone (or be able to build something that allowed carrying the trombone like a pannier), but I doubt it will be very good, especially with all the additional stuff you want to carry. I do know some cellists who have strapped their cello to their backs and ridden (somehow), but I don't think it was a particularly stable or safe solution.

The real solution I think is for you to get a cargo bike. One thing you might want to try is to do an Xtracycle conversion - the Freeradical was a kit which allowed you to extend a normal bike into a cargo bike (but is currently not being sold -- you may be able to find an existing bike/kit somewhere thoguh). Unfortunately, cargo bikes like the Surly Big Dummy and what not are not exactly cheap (and are not normal bikes), but your use case is pretty much what the cargo bike was designed for.

An example of a Freeradical conversion is: 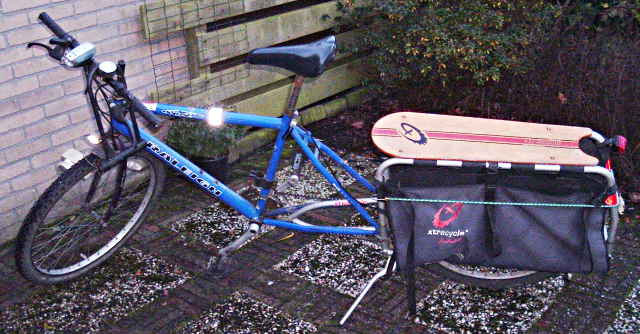 and a xtracycle carrying another bicycle 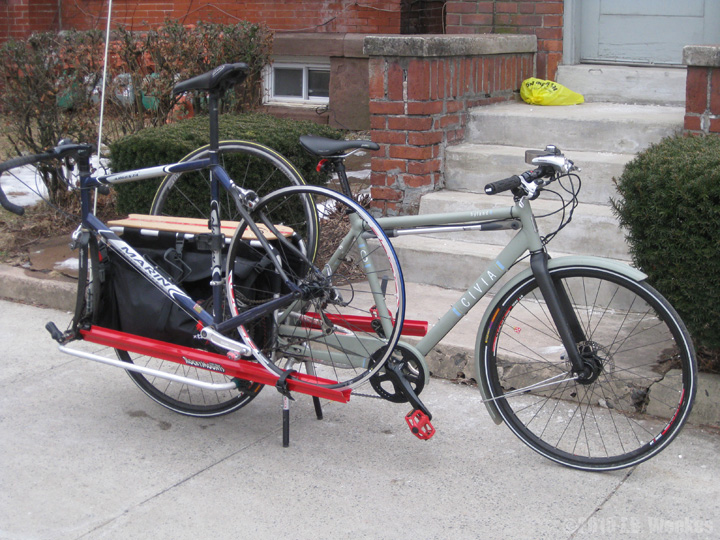 Note that there are other styles of cargo bikes out there, like the Civia Halstead: 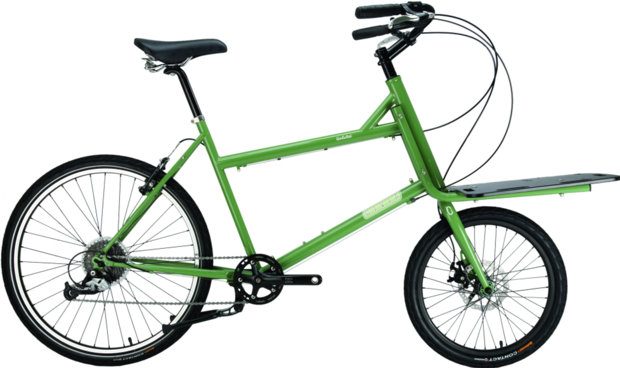 Another option is to throw the trombone and what not into a small trailer, such as one of those children's trailers like this (a cheap one will be about 150 bucks): 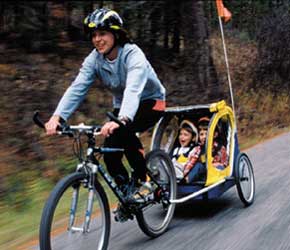 or attach a regular bike trailer like the Surly Ted (about 700 bucks for this model, but there are cheaper ones):

Use a Gig Bag that you can use as a backpack.

Thats what they are there for, and it seems there exist some for trombone with enough extra space for stands and sheets (check before you buy).

I use a baritone saxophone gig bag on my bike (an older version of this one). While it may look a bit oddly proportioned on me (115cm in height; the bag, not me), it works perfectly fine for relatively short distances (5km are fine). As trombones weight significantly less than a baritone saxophone (~2kg vs 6kg, my fully loaded bag weights in at 13.5kg), I don't think it would be a problem.

I do use a cargo trailer when I have to transport multiple instruments and non-folding stands. The baritone sax stays on my back though ... it's too large for my trailer :(

In the Netherlands, and other places, precious cargo is often transported in a 'bakfiets'. This test has photos of several (and a good test in Dutch) so I do not favor one over any other. There are also transporter bikes with enclosed front boxes but those are often just that bit bigger that finding a parking spot is not easy.

The traditional bakfiets in the Netherlands is quite big, you can transport a baby grand piano in them, and some do to play outside. The modern ones are smaller and handle like a normal bike, although some are trikes and handle as trikes not much bigger than a bike.

I used to carry a small acoustic guitar (OO sized) by attaching it like a pannier to the rear rack. The neck of the guitar went straight up. I would think that you could do something similar with a trombone. I can't quite picture a trombone case, but it seems like it might actually fit in a pannier which would make it very easy.

Are the stands folding music stands? It seems like they might fit in a pannier or could be strapped on a rack. The sheet music could go in a portfolio or binder in a pannier.

If you wanted you could use something like the pannier mounting hardware from Arkel to modify a case to attach to your racks like a pannier.

Not the answer you're looking for? Browse other questions tagged transportation commuter or ask your own question.

24
Equipping a commuter bike for a 5 mile city commute
1
If not Kona Asphalt Commuter then what?
12
Protocol for slipstreaming another cyclist?
2
How should I transport Cannondale Bad Boy 5 INSIDE a BMW 4 Series Coupe?
6
Can a beginner cyclist commute ~40km (round trip) to school/work by bike?
11
Minimalist setup for a “travelling bike mechanic”?
4
Mini-van for bicycle