A representative in Oregon has recently introduced a bill that would prohibit children under the age of six from riding in bicycle trailers. While it is far too early to tell whether this bill will pass, and what the final law would look like if it did, I am curious what alternatives to bike trailers people can recommend. I don't have kids myself, but I grew up riding around in a bike trailer, and know people who do have children and use trailers like these. I am particularly interested in suggestions for families with multiple young children, since one reason my family loved bike trailers was because it could easily fit two of us at once. If this law were to pass, what alternatives would be available?

Followed some links from your links and found the actual text of the law, which summarizes the law as:

Prohibits person from carrying child under six years of age on bicycle or in bicycle trailer.

Elsewhere in Oregon law, a bicycle is defined as:

[a human-powered vehicle] designed to travel with not more than three wheels in contact with the ground.

So a unicycle, bicycle and tricycle are all covered by the proposed law. There's also a wheel-size provision in the definition, which makes me suspect that too small of wheels or 4 of them puts you in a category like skateboards that probably aren't allowed on the road.

So I think you simply have no solution if that law passes as written. Everything I've ever seen for using a bicycle to transport a child constitutes "on bicycle" or "in trailer". Even if you devised some clever sidecar or push-cart mechanism to get around the letter of the law, I doubt that would work.

But just in case it's useful, there was an earlier question along these lines that I think covers all the answers you could be looking for: Recommendations for Transporting Twins On The Front of a Bike

Try Christiania bikes from Denamrk, if they an be delivered where you live: 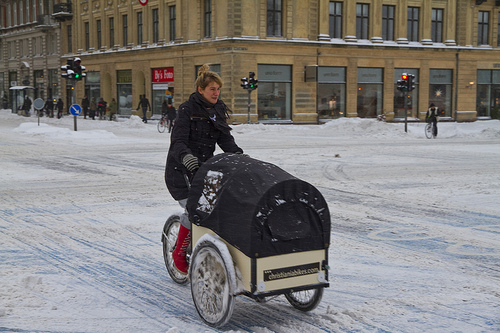 One of the best reference articles on the topic of children and bicycles is Family Biking Ages and Stages from the Totcycle.com blog.

A bakfiets is great for the youngest rides because a the child rides in front of you, so you can make eye-contact. A rear-facing carseat can be strapped in, and the center of gravity is down low, and the baby is further protected by a wooden box as well.

I took my 3 month old soon for his first bike ride in our bakfiets today.

I've been pretty happy with a connector piece between my bike and a small kid's bike. I even did two cycling holidays with it. The brand I used was "follow me" which made for a particularly solid connection.

Some pictures (spiced up with unreadable Dutch text): http://reinout.vanrees.org/ligfiets/follow-me.html

Not the answer you're looking for? Browse other questions tagged regional trailer us legal children or ask your own question.

22
Recommendations for transporting twins on the front of a bike

15
Transporting groceries
18
One vs. Two wheeled bike trailers
22
Recommendations for transporting twins on the front of a bike
4
Inline trailers
7
Are there adult bicycle passenger trailers for adults in Australia?
8
What to look for when buying bicycles for children
1
Source of John Deere line of children bicycle tires?
13
does anyone sell bicycle trailers with brakes?
9
Designing Bike Trailers – Especially the hitch and load