Do "trailer bikes" help kids learn to ride a bike on their own?

I'm considering getting a trailer bike for my 3 year old (image below) but want to know if it will help or hurt progression toward him riding independently.

He's amazingly fast on his Strider no-pedal balance bike but hasn't shown much interest in riding his 12" "real" bike with training wheels. I'm hoping a trailer bike might help him bridge the gap but in the interest of getting him to ride his real bike independently, would the trailer bike help or hurt the cause? 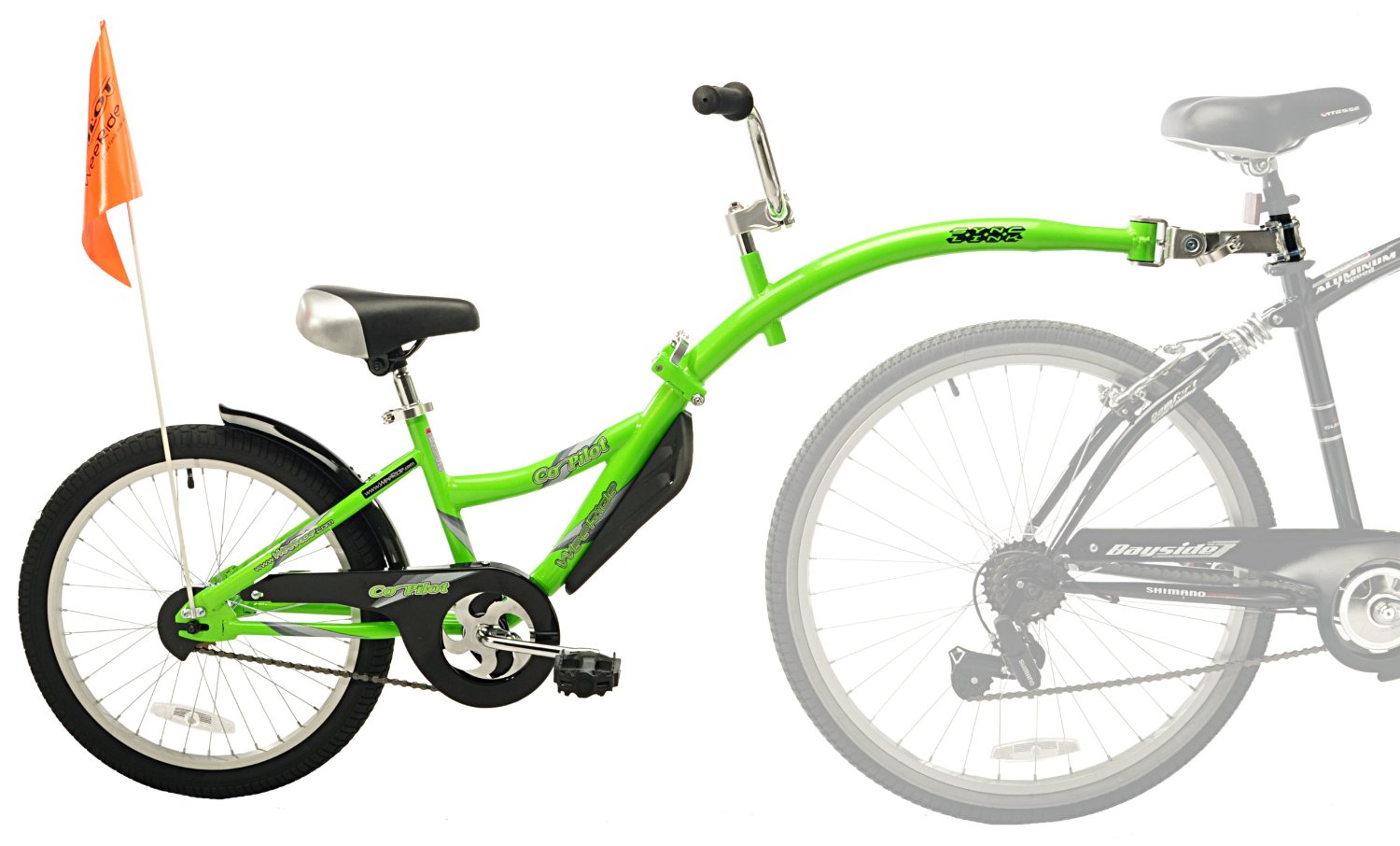 He is 3..... he will do what he wants to, when and how he wants. I had a lot of trouble getting my boy off trainers (We did not go don the balance bike path). After many attempts involving removing them and putting them back on, I gave up and decided when he is ready (or old enough his peers laugh at him), he will want them removed. One day he just came up to me and asked me to take them off.

Choose you battles carefully - only pick ones you will win, and only fight those that must be won. This is not one of those battles.

So should you get a trail along bike? If its to get him riding quicker/better/faster absolutely not. if its because its a fun way to spend time together going at pace you can both enjoy then its a great idea.

There are towbar attachments that clip to a standard bike, lift the front wheel and give a similar effect to the tow along - but if you boy wants to go solo for a bit, unclip and away he goes. When/if he get to tired to do more riding, clip him back in and you do the work. refer What should I look for in a "trailer bike"/"tag-along" bike for a child?

When my daughter was around three, we started out with the trailer bike and then graduated to a tandem with the pedals adapted.

She had been on training wheels on her own little bike since she was two and was doing just fine; being on the trailer bike gave her an opportunity to go places, to feel like a big kid and to develop an appreciation for what cycling can offer. For me, I saw it as an opportunity to be exposed to cycling but even better, it was lots of fun for us both. Sometimes she would pedal, other times not so much. It didn't really matter.

In short order, she was riding her own bike but we continued to use the trailer bike until she was eight when we graduated to the tandem. She would pedal along, talking the whole way, and of course, on the hills, I was on my own. Again, the bottom line was that we had tons of fun and traveled many miles in that way.

Now at 27, she lives in the Boston area. She sold her car and uses her bike as her primary mode of transportation. I seriously doubt that she would have even considered selling her car if she hadn't had that kind of exposure and had developed such positive feelings about cycling.

So, the moral of the story is that perhaps you could see the trailer bike primarily as a way of showing your kid the possibilities as opposed to a way to learn. Much less anxiety for both of you!

Discussions of parenting is always dangerous, but what is the hurry? Children don't understand work motifs (i.e., do A, so you can accomplish B) and seem to learn best in play motifs (or that is at least what my partner keeps hammering into my thick scull).

I am in the opposite position, I wish my 3-year-old would rider her strider bike more as we used to blaze trails together, but she is obsessed with pedals now and being like daddy, so we awkwardly ride along on flat paths. I do it because she loves it.

I think as the comments suggest (including your own), keeping things fun should be the objective rather than any explicit goal. He finds the trail-a-bike concept interesting, then maybe give it a go, if not then I would suggest letting it go.

I have never seen a 20 year old on a strider yet! Eventually, he will outgrow it and need to transition to a pedal bike if he wants to keep riding.

When my 4 year old transitioned from her run bike to her first pedal bike, the one thing she struggled with was negotiating her pedals. She would try to 'run' on her pedal bike, and got frustrated real quick trying to figure out how to negotiate her pedals and cycle her feet. I think a trailer bike would be a good transition from a run bike to their first pedal bike. They already have all the balance they need from the run bike—they don't need training wheels—they just need to learn how to cycle the pedals (and brake/backwards pedal). Trailer bikes don't give them an opportunity to do anything else but cycle. I think a bit of riding on the trailer will give your kid the confidence he needs to hop on his own pedal bike without the training wheels. The trailer bike will give him an opportunity to develop some muscle memory as well as give you a little feel for how strong he's getting at pedaling and braking.

16
What should I look for in a "trailer bike"/"tag-along" bike for a child?

4
How can I find a biking club that has a group for riding with kids in a trailer?
7
Teaching a child to push off
2
Rear rack or similar storage options for child's bike (16" wheels)
6
Child sleeping in bike trailer
3
Can I convert Kiddicarrier jogger to a bike trailer?
3
Help identify vintage kids bike
3
My child seems to have difficulties riding bike - would different tires help?
1
Kids bike question