I am 6ft and riding a firefox kompac. My speed never crosses 18kmph

What is the difference of having larger no of teeth in the front derailleur? does it help in speed and distance covered? Suggest a good hybrid on which I can achieve faster speeds? My budget is $700.

What is your "cadence" (number of pedal revolutions per minute)? A healthy young cyclist should be able to "cruise" at 80-90 rpm, and that would be considered your top speed.

If at 80 rpm you're only getting 18kmph (11mph) in your fastest gear then your bike gearing is quite low and you probably need to change something. But many novice cyclists simply pedal too slowly.

With a multi-speed bike you should focus first on getting a "reasonable" cadence (maybe 60 rpm when "taking it easy", 80-90 when trying to go fast). "Gear down" into an easier gear until you learn to maintain cadence, then slowly increase gear difficulty to gain strength and stamina.

From the web site that bike comes with 40T chainring and a 14-28T Freewheel. 17.94 kmph is a cadence of only 50. bikecalc.com You should be up at 80+. On a sprint you should go over 100. A folding bike is not as efficient as most full size bike but gearing is not what is holding you back at 18 kmph. 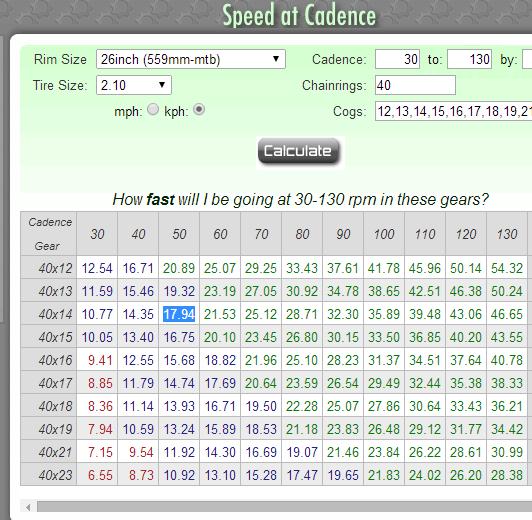 Not going to give specific hybrids but there are many at that price point. Some are more road like (smaller diameter tires). If you are looking for road speed go for more of a road style hybrid.

One common problem with people who are new to cycling is that they tend to under-inflate the tyres. Too low tyre pressure means increased rolling friction which is likely to be quite noticeable. (At higher speeds the air resistance is dominant, but not really at these speeds.)

Exactly how high pressure is a hotly debated question, but as a rule it should be near the 'maximum recommended tyre pressure' indicated on the sidewall.

By the look of it, that bike comes with some knobbly off-road style tyres, but if you intend to stay on paved roads you could replace them with smoother (and narrower) tyres which would also improve the top speed.

Not the answer you're looking for? Browse other questions tagged derailleur hybrid-bike speed or ask your own question.

5
Is my front derailleur angled straight?
12
Does a 700c wheel help you go faster?
0
Problem with changing to high gear on the front derailleur on my new Bianchi Spillo Rubino Altus Rigid
5
How does weight and strength of a person effects the riding of bicycle at higher speeds?
1
mix left shifter and font derailleur of different speed
3
Replacing an 8-speed cassette with a 9-speed one to make my bike faster
1
How durable are road or hybrid tyre tubes compared to mountain bike tyre tubes?
2
Can I do brevets (long distance rides) on my hybrid bike? If yes, how to start?
5
Installing a chainguard on a bike with derauiller