This is for the Freewheel (Not Cassette Freehub) swapping problem. I would like to know if it is feasible, regarding the axle breakage. Assuming that I have:

Before we get into axle breakage, let's discuss your axle spacing, which probably isn't going to work going from a 6spd to an 8spd cassette unless you install a new, longer axle with more spacers, and you'll need to re-dish the wheel slightly.

In terms of breakage, I've seen all speeds of freewheel axles break over time. Freewheel hubs' axles are just more likely to break because of the leverage you can get over the axle. Here's a great diagram that illustrates this point: 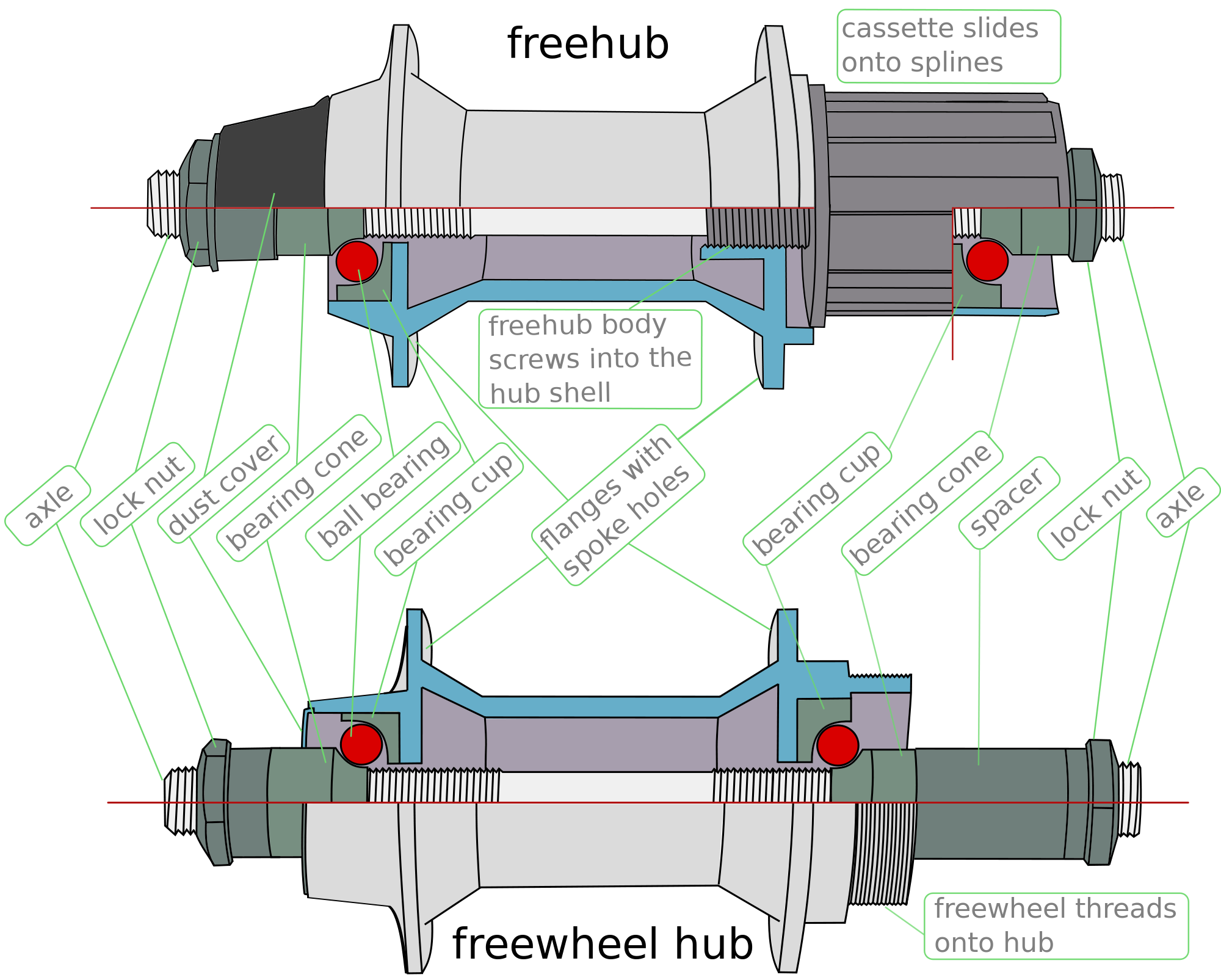 The red circles are where the bearings brace against the axle. The drive side of a freewheel hub has a lot more axle acting as a lever than does a cassette hub, and this is the primary reason they break.

Is an 8spd spaced freewheel hub more likely to break than a 6spd spaced freewheel hub? Yes it is, but marginally. Even working in a shop for years, I cant say that I saw a statistically significant sample of broken axles come through to say that 8 speeds broke more often than 6 speeds- probably the opposite as the 6 speed hubs were older and had seen more use. The bigger comparison here is freewheel vs cassette wheels, and I can tell you without a shadow of a doubt that cassette hubs hold up better.

Since a cassette hub isn't what you're looking to use though, I would say don't concern yourself with the increased likelihood of axle breakage when going from 6spd to 8spd. You're probably going to be less likely to break the axle, assuming you buy a new axle for the conversion as you'll be starting over again on the fatigue life for the axle.

I have done the six to eight conversion on an older road bike. By the way I have broken two seven speed rear mountain bike axles. So it does happen. I went with a mountain size (14-32) gear range. I added flat bars and rapid fire shifters. The larger gear range allows me to climb easier than the old 12-25 freewheel did. As @joelmdev stated, I did change the axle spacers. The axle was long enough to reuse without replacement. The frame required some hand spreading to fit. I think the key is to realize the limitation of the drivetrain. You need to use the gearing to keep from overloading the axle. I would not take it on anything rougher than a gravel road. Unless you have a bunch of parts laying around it may be cheaper to find a used wheel with cassette. Also consider the added cost of the freewheel tool (maybe two of them if the brands are not compatible).

4
Mounting a 7-Speed Cassette on an 8/9 speed hub
2
Can you change a 7 speed freewheel to 6 speed
1
Bent freewheel axle in less than 200km
3
What causes frames to break at the (rear) dropouts?
1
Replace freewheel with freehub?
3
Best option to upgrade 7-speed bike to higher gears
1
7 speed freewheel
6
Freewheel replacement for a touring tandem bike
1
Can I replace a Shimano MF-Z012 (freewheel) with a MF-TZ510?
6
What to do with a busted freewheel on a vintage road bike?