I saw a fascinating bicycle today with "world traveler" hand-written on the frame. I was awe-struck by this bike. The odometer showed over 2000 km ridden, in freezing winter temperatures. The plastic rear fender looked like it had been hit like by a cannonball. Its Brooks saddle (perhaps this model) and handlebars were very old and worn-out.

The bike had a sturdy headlight in the front, no disc brakes (a good decision, it just had easily fixed rim-brakes), a lock mounted to the frame by tubes wrapped around it, as well as front and rear racks.

There were also many oddities like a Hamex child-carrying-seat without the chair and a metallic chuck under saddle with a hole (perhaps to move something or to attach something).

It did not shine in glory, but it surely is a very well-used bike.

On such a bike, one would have to balance utility, weight, and durability. What do bikes being ridden around the world look like? How should a bike outfitted for an around-the-world tour be equipped?

In response to the suggestion above, here's an answer about why you might use a recumbent on a world tour.

As Neil Fein says, comfort on the bike is a huge issue on longer rides. A recumbent offers you the "lounge chair" position which is much more comfortable than any upright bike. At the same time, you can also choose a more upright position than most uprights offer, so you see more. Instead of your back sloping forward and making your natural eye-line point at the road by your front wheel, your back slopes the other way and your head is naturally vertical. It's hard to describe the increased comfort because it sounds exaggerated. But I can finish a long day on a recumbent bike and feel tired, rather than really, really sore ... oh, and also tired. All the stuff about a good saddle, cycling knicks, creams, inspecting your crotch every day, caring for saddle sores... it doesn't happen on a recumbent.

There is more variety in recumbents in many ways, but the most common is a short wheelbase bike: 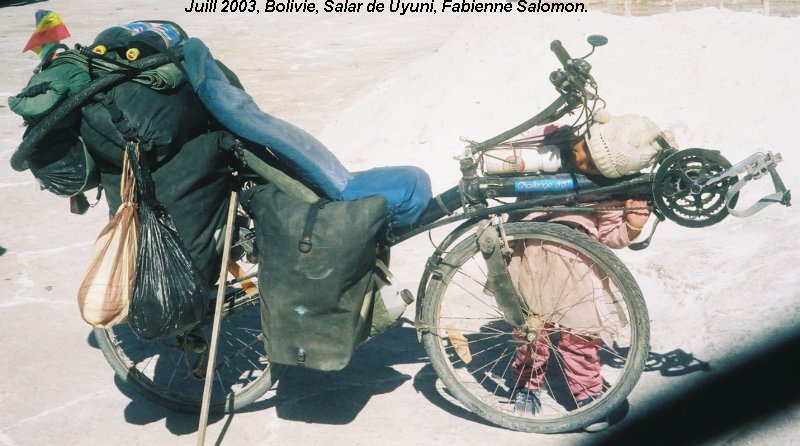 That's Mattheui's bike in Bolivia after some months on the road http://tourdumondeenbent.free.fr/en/index1024_cadres.html In my experience most recumbents end up looking like that after a few months on the road. It's just too easy to strap stuff on and keep going.

All the features listed above are present - considerable load carrying capacity, 26" wheels, V brakes, derailleur gears and so on. It's a bike that can be fixed easily with parts that are readily in most of the world. The features more common on a recumbent are the rear-view mirror on the handlebars, the lack of front panniers, the tubes enclosing the chains and the stick-as-stand. Note that the wind resistance of this bike is probably greater than that of a similar upright bike, so it lacks that advantage that a recumbent would usually have.

There are other choices. If you're not doing much riding on unsealed roads a recumbent trike offers greater stability which saves energy and lets you pay more attention to the scenery. The disadvantage is that a trike has three wheel tracks, so it's harder to avoid bumps (which is an issue for recumbents in general as it's hard to lift your weight off the seat). A long wheelbase bike is more stable than a short wheelbase bike, and it's easier to mount and dismount a loaded bike. As you might expect there is a wide range of strongly held opinions on these questions within the recumbent community.

Personally I have toured on both recumbent bikes and trikes (as well as uprights). I'm unlikely to tour on an upright again, due to the advantages of a recumbent. I did 5Mm or so on a recumbent tandem trike from Broome to Perth, and that was very stable with a huge load capacity, but slow on the hills and gravel. My SWB bike has an extra-long back rack, allowing me to carry a pro camera kit as well as touring load, and I've ridden that on a number of shorter tours (2-3Mm each). I have also toured on a SWB low racer (silly, but fun) and a recumbent four wheeler, which is as slow as the tandem but has a ridiculous load capacity (at one stage I had about 120kg on board when someone I was riding with had problems. So I strapped their Bob trailer to the top and kept going). The problem with the quad was that a chain, cassette and crankset lasted 3Mm before wearing out. All of those bikes had 406 wheels (BMX size), disk brakes on all wheels and various custom-made accessories (I make my own panniers, for instance). The bike has a Rohloff, and after the first tour so does the quad. Here's a shot of my tandem and trailer in Broome

(That's Mattheui's bike in Bolivia after some months on the road http://tourdumondeenbent.free.fr/en/index1024_cadres.html)

On a very long tour such as this, the cyclist will want to be as self-sufficient as possible. Bike components and accessories are often a trade-off between weight and cost, but touring brings durability and ease of repair to the forefront.

This kind of riding is often called loaded touring, and has the strong implication that the cyclist is carrying everything needed such as food, camping equipment, tools, spare parts, maps, and sometimes more. There are other styles of touring such as supported touring, but I'm guessing the cyclist whose bike you saw wasn't doing this. Features of a bike suitable for extended loaded touring include:

Common touring bikes include the Surly Long-Haul Trucker and the Trek 520. (The Novara Randonee is essentially a clone of these bikes.) Rivendell and Bike Friday also make well-regarded touring bikes; there are no doubt many other manufacturers of sturdy frames. Steel hardtail (non-suspension) mountain bike frames can be converted into touring bikes relatively easily.

There's an old touring adage: You can tour on any bike. Carbon-fiber racing bikes can pull a trailer full of gear. The above outline of what's helpful on a touring bike is what I would consider a best-case scenario, but is by no means mandatory.

I'll close this with a picture of one of my touring bikes. 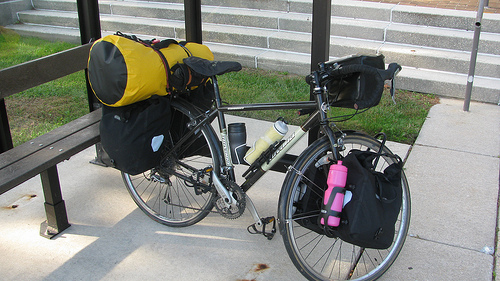 While we were cycling down the pacific coast of the US, my girlfriend and I met a swiss couple who had been touring the world for 15 months. They didn't move very fast, but they had covered thousands of miles. Here is what I remember from their setup:

On our tour, we met a great number of foreign tourists who had visited many countries by bicycle. Generally, their touring gear was not terribly different from what we ride with in the US. Sometimes it's worth going to a less efficient but more widely available component (like 26" wheels), but generally the most unique thing about a world touring bike is the rider. To make it a good touring bike all you have to do is ride it all over the planet.

The guy who cycled around the world on the BBC used a "Koga Miyata Signature - custom spec alu alloy frame, 700mm wheel, Rohloff hub, disk brakes, butterfly bars" according to his web site

The faster (and slightly nicer) guy used a Tout Terrain frame equipped with a Rohlhoff hub.

So it seems you splash out on a Rohloff hub at least !

4
When is Cyclometer useful?
2
What does self-support mean during touring?
0
Long-lasting price-worthy fenders?
3
Should I use an already master-linked chain or add a masterlink to a plain chain?

25
What are important items for a touring first-aid kit?
3
Best brake pads for long distance travelling?
24
How do you distinguish a touring bike from a speed/road bike?
7
Why top touring bikes have no suspension forks?
15
500mile bike tour?
11
Aspects for choosing a bike to ride across Europe
9
Touring bike with good support network in India