Why are battery-powered lights so popular?

I have always been slightly confused by this. To me, a generator-powered light seems the better solution if you need light regularly, because there's no need to worry about charging, and because they can be permanently attached. Yet many people seem to not only prefer battery-powered lights, they appear to not even consider a generator.

Why is that so? What are the advantages to battery-powered lights?

The main advantage, in my view, is that you can more easily add/remove battery-powered lights.

Why this may be desirable:

Probably most people's memory is of the side wheel dynamo systems when they were a kid that wore away tires, put out a feeble light and turned off when you stopped. 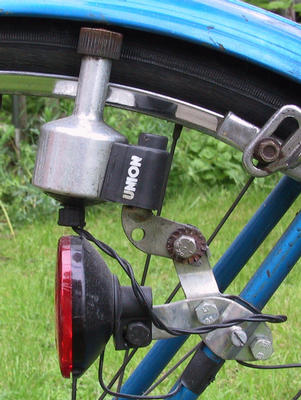 These days one can get a set of bright, long-lasting, front-and-back, multi-attachable, battery powered lights for less than $30 (roughly 22.2 euros). And, that suits the typical recreational rider and probably most commuters.

A dynamo, means installation...at the most difficult is re-building a wheel; but easier is mounting a frame mounted wheel powered dynamo correctly...not to mention effectively wiring the bike. Many bike riders just don't want to deal with it.

Uh... Surprised why nobody's mentioned: 1) A dynamo-powered light changes intensity depending on speed (may not be an issue with modern LEDs which require low power); 2) No lights at all if you're stationary. This a serious disadvantage. If you have to stop in a dark area for whatever reason (puncture, something fell off the rear carrier), being seen is vital.

For me (2) is sufficient to never consider a dynamo. As far as the relying on batteries go, I have multiple lights anyway; it's unlikely that batteries will go dead on all of them at once.

Tyre driven dynamos can slip in rain or sleet. Hub dynamos can't slip, but do have a tiny amount of drag even when turned off. For a commuting bike, it's not enough to worry about, but on a high performance bike that you hardly ever use in the dark, with battery lights you don't have any drag from something you aren't using (and can leave them at home if you know you wan't need them). And you can get battery powered lights that are much more powerful than dynamo lights. You can always buy a bigger battery, but there's a limit to how much power you can get from a dynamo. (On the other hand, no battery will last forever, and dynamo lights never need charging.) Modern LED dynamo lights are really very efficient, but for some off road use, many people want more (and dynamo hubs aren't really designed for that sort of use).

The main point of failure, and in my opinion the largest disadvantage of dynamo vs battery lights, shared by both hub dynamos and side wheel dynamos is: wiring.

The wiring on a bicycle is often very fragile, and in my experience it is always the first thing to break on any bike. This is especially true if you park in a bicycle parking area where your bike is subject to other bikes falling over or otherwise being mishandled by other people. Add corrosion of the connectors in wintertime (salty spray from the wheels) to this mix, and you understand why dynamo lights are not reliable. The frequent movement due to steering of the wire as it crosses from the front fork to the frame can also be a frustrating point of (intermittent) failure, that can be especially hard to find.

The rear wiring is especially vulnerable due to the length of the wire to the rear light (in case of a front dynamo, which is most common here) and the messy wiring that goes with connecting the light across the frame and rear mudguard. Some bikes use the frame as a conduction path (grounded frame) which at least eliminates one wire. This however requires conducting mudguards for rear lights and has the disadvantage that corrosion of the connecting points is common and leads to a gradual decrease in light output. The connection between a rear light and the metal mudguard is a notorious example of this. This also explains why bikes with a front side wheel dynamo and dynamo powered front light, combined with a battery powered LED rear light were very popular (in Europe at least) until a few years ago. This setup at least removes some of the major concerns (no more wire breaking due to steering, fewer connections and fewer and shorter wires)

There have been a few improvements in making more reliable wiring, such as integrating conducting strips into the mudguards and using semi-automotive type connectors that should make the wiring more reliable.

I would prefer to use dynamo powered lights on my bike, as I tend to forget my LED lights when I need them or forget to charge them, but the poor reliability of the dynamo/wiring combination prevents this.

ROI for dynamo lights is poor in the era of LEDs for the bulk of the population (there are always exceptions of course). I can buy a nice set of LED front/rear lights for around $50. Add-on regular batteries for another $5 or so. OK, I'm in for under $60.

I can buy 50 sets of batteries (we'll keep it simple and assume my savings will match inflation) for the upcharge of a dynamo. These batteries last years of usage with LEDs. I'd never even break even with a dynamo in my lifetime, nevermind actually saving money.

As mountain biking specifically doesn't seem to have been addressed in above answers.

Not the answer you're looking for? Browse other questions tagged safety headlights dynamo or ask your own question.

5
Are there LED based dynamo powered lights suitable for night time MTB riding on singletrack?
10
Pedal-powered head/tail lights
3
handlebar light (or mount) with ball and socket joint
3
Are there dynamo powered front flashing lights?
4
Can I get a bright rear light using AA batteries, or is there a compelling reason why nonreplaceable batteries are so widespread?
4
How do you repair or lengthen a B&M Luxos Control Cable?
2
Why are there no/very-few bicycle-specific lights with replaceable 18650 Li-Ion batteries?