Heavy things can be a lot of books, full beer cans, construction woods and other misc in a place where I cannot use a car and the trip is long and suitable for riding. So which one would you favor? And which kind of adjustment would you make to move heavy things? I have seen a post office with diamond-frame bike framed with a metallic balancing thing, for example. Any such devices for other options and what are they called? Stabilizer? Support device? 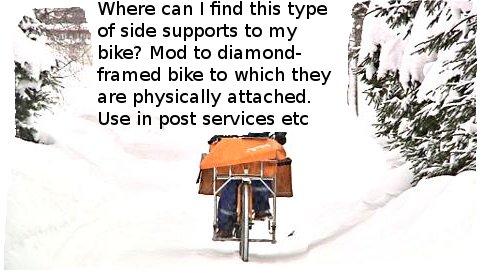 I have long been looking for something like that but haven't yet found from second-hand market, I believe they could be reasonable priced. A more sturdy example here from Austria with side wheels, now the frame is original. I don't know yet how much such side supports can stand so open to any suggestions, does not need to be diamond-framed like in the picture.

I would go with a four-wheel recumbent for carrying a big load any distance, just because it's comfortable and controllable. I have one, after building and trying a wide variety of load carrying bikes. It will carry 120kg in a 60x80x50cm bin (220l), and with a bit of plywood instead has carried a chest freezer and a washing machine (separately). With a trailer that has a similar bin I can carry 250kg of soil or other bulk material. It has a Rohloff hub and disk brakes on all four wheels, which makes 250kg loads relatively controllable.

The classic "long john" bike is a good compromise - they can carry 60-80kg bulk loads quite easily and are as fast and nearly as maneuverable as a similar weight diamond frame bike. But, of course, the load is in one piece, low down in front of you. Especially when carrying kids, the advantage of being able to see your load is significant. A long john can often also take a rear rack for added capacity (but you're back to breaking the load up and putting it in panniers).

If you can split the load, a Surly Big Dummy (or XtraCycle) works well, they're easier to ride than a long john but the split load makes them less flexible.

For short trips an upright trike based on a rickshaw works well, but riding slightly canted over (from road camber) is a very odd sensation that takes a bit of getting used to. I've seen one of those with a wheelchair strapped to the platform which was quite cool.

Trailers work well for loads up to about 100kg, but more than that is getting quite dangerous - if your bike falls over the trailer will not stop, it will run you over. For long loads a "jinker trailer" where you attach the load to your bike then the trailer to the back of the load can work really well. I've carried 6m lengths of bamboo and timber behind an upright bike this way. A cheap trailer is often a good start but they are usually poorly made and fall apart if used regularly. Expect to spend $500 or more for a trailer that will carry its rated load 5Mm or more.

My "big trailer" is 1m wide by 2.4m long with four wheels and inertia braks on the front wheels. It's only safe to tow behind the quad but will take ~500kg. It's more a question of how much I can pull.

Heavy cargo on a bike can raise the center of gravity. With smaller cargo, whether one uses a trailer or attaches the cargo to the bike (cargo racks with straps, panniers, a backpack, et cetera) is, to a point, a personal preference. (I don't know if there are recumbent cargo bikes, so I really can't comment on that.)

However, when the cargo gets large enough, a trailer will become the best option for a couple of reasons:

However, panniers and racks have the following advantages:

Baskets are another option. - They have the advantage of ease of use: the user can toss stuff in the basket and roll away. - However, stuff can blow out of them, and they're heavier than panniers.

There are bikes that are built for cargo, such as the Surly Big Dummy (essentially a bike with the frame behind the saddle stretched out for better cargo placement) and box bikes. Also, there are industrial tricycles with room for large baskets in the back, designed to tote around large tool boxes and other, similar heavy stuff.

It's probably impossible to say what style of bike is best for large cargo. That's why I have several bikes, some good for hanging panniers from, some good at pulling a trailer.

Recumbent bikes can and do carry panniers or pull trailers. However, I've never seen one with any kind of basket. Perhaps someone else can weigh in on this aspect of the question?

What you are carrying and where you are carrying it are very important in deciding what vehicle to use. If I am going on a bike camping trip where I know I don't need to deal with walking stretches (like stairs, steep hiking trails), I'm much more likely to take my Xtracycle rather than my short diamond frame bike plus trailer. If I have to negotiate areas where I will need to pick my bike up to deal with stairways, I will mix a trailer and panniers as neceesary. If I need to haul kids, I might choose the Xtra. If I need to go long distances and don't need to negotiate steep climbs, a recumbent with a trailer is a very comfortable operation.

If you prefer to ride a recumbent bike and don't need a trailer, a Cargo Monster might interest you. Eugene's Human Powered Machines also makes heavier duty hauling trikes.

You might want to consider an electric assist option as well. Clever Cycles StokeMonkey is an adaptation I've seen on Xtracycles before, there are other electric assist conversions out there. Lightfoot cycles also makes electric assist recumbent trikes.

Many bicycle life-stylists have different bikes for different purposes. If you need to haul lumber, I would suggest a bike that can carry a long (8+ foot) aluminum utility trailer. If you carry lots of boxy items and want a the lowest center of gravity, you might prefer a long john like a Bullitt or CETMA cargo bike. Lightfoot cycles appears to make a cargo trike with a locker on the back, which might be appropriate if you're hauling valuables like medicines.

Your terrain and weather will also affect your choice. Bicycles might handle better in snow than trikes, but you might prefer a trike with studded tires if you want to carry a load on plowed, icy streets. If you are out in the wilderness where you might need to handle power snow, slush, ice and gravel, you might want to consider a Surley Pugsley (with 4-inch wide tires) and towing a trailer. You might invest in multiple bikes as your tasks and seasons dictate.

www.atomiczombie.com has designs for cargo trailers and bikes if you would like to try and roll your own.

Those Austrian postal bikes make sense in a context where the rider will be starting and stopping a lot, as those outrigger wheels will hold the bike up when the bike stops. But I don't think they'd be helpful for steady riding over longer distances.

Panniers are fine if the load can be divided among panniers, but the question refers to building materials. For that, I think a trailer is the most obvious good option. Cargo bikes (like a longjohn/bakfiets) or cargo trikes that would also be a good option, but that would be much more expensive and less flexible than a conventional bike with a trailer, and might not carry cargo as well.

In my experience, an electric Yuba Mundo has worked very well. By adding a trailer to it, I've hauled very bulk loads like a love seat stacked on top of a couch. Handling and performance are good up to about 100kg, although both the bike and trailer are rated for more. With my batteries, I can comfortably go about 35km, but further trips are possible with more batteries. Here are some photos of a number of things I've hauled.

I've carried some moderately-awkward long things on my folding bike, by strapping them to the main frame at the front and rear of the main beam.

I then strap them to the rear of the parcel rack. I could have fastened a brace to the rack that poked out the sides, would have been better.

This gave a supported length of about 1.8 metres, and any excess should be evenly shared between front and back. The maximum length of your load would be about 4 metres this way, BUT local laws may limit your maximum dimensions. Find out beforehand!

If the load is very heavy I'll use my trailer but that limits the overall length.

Last resort is simply pay extra for delivery. Its not that unusual, and getting an item delivered means someone else owns the risk while its in transit.

6
How can many people move a car -trailer with bicycles?
6
Do I need to be concerned about a carbon frame if I attach a bike trailer?