Is it safe to ride a steel bike with a dented/buckled frame?

I just noticed, to my great sadness, a small-ish buckle/dent in my diagonal lower tube. (I'm riding a Cooper T200 single speed.) I just moved house; I hope I didn't do it. I probably did.

It's about half way up and looks like it's been bent against something, or crushed between something - the tube itself is still straight, it just has a bit of a ding. It's probably only dented in a fraction of an inch.

A fraction of an inch is no longer a perfect circle, though, and it'll inevitably weaken it. Question is, enough for me to worry about? Or should I just keep riding and forget it?

I ride on roads, to work, nothing strenuous, but want to be able to hit the occasional pothole or what have you without constantly thinking that my frame is going to collapse under me.

Does anyone have any actual experience with this sort of "injury"? Any suggestions how I might fix it, short of replacing the tube? I don't care if it looks a bit rough, we're through the honeymoon period, it's just a functional machine now. :-)

Edit: added pictures, even though this is answered. Note that the other side of the tube to the visible dent is still perfect. (These are the same dent, from slightly different angles.) 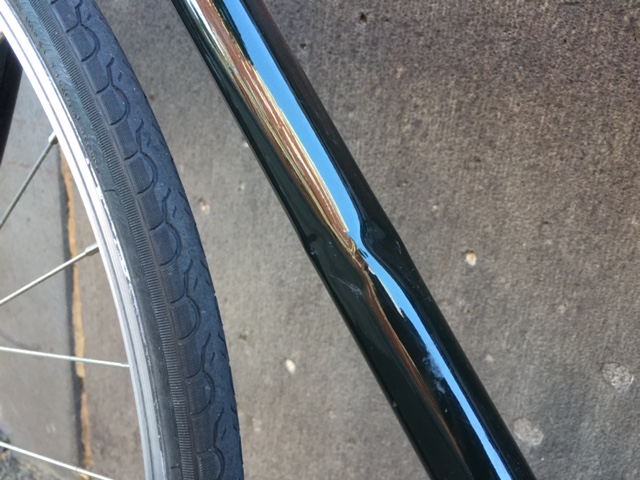 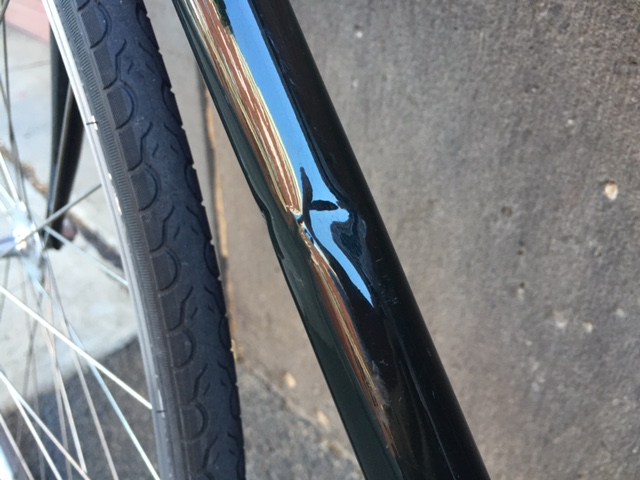 All steel frames of any age get a few dings from serious use.

The failure point for steel frames is usually the highest stress points: the joins. That is why we used to have fancy tubing sets likes Reynolds 351 double butted, and I notice that your frame does too.

So, if the dent is away from the joins I say the frame is ok for general use. Steel is quite a forgiving material, but I wouldn't be doing bunny hops on it :-)

I would add that I've ridden high-end bikes for decades after their first (heart breaking) dents. One of them has just died, but a fork failed (at the join), not the dented frame.

Dents in frames cause what is called a stress concentration point. Imagine you had a sheet of tinfoil, and you took a pin and poked a hole in the center of a 12x12 square. Now if you bend/warp the tinfoil many times, you'll see cracks/tears/stresses forming around that point.

The same goes for frames, however, it takes a pretty serious dent to cause accelerate fatigue to the point where it would be dangerous. As with any bike: inspect it regularly for cracks. That is something that should be done regularly anyhow. Otherwise, ride on!

That actually can be repaired to a reasonable extent. There is a process using wooden forms that reshapes the tubes. It is not beyond the abilities of the home mechanic. As far as ridability in its current state, I wouldn't sweat it. Here's the process for rolling out a dent. If the bike is that dear to you, go for it.

21
Dealing with rust on a steel frame
36
How can you recognise a quality steel frame?
2
Clear lacquer on steel frame
8
Which type of frame is better for a touring bike, steel or aluminium?
2
Steel road bike with frame that hides cables
2
Harsh Winters bike - Steel vs aluminum frame?
7
Bike with a hi-ten steel frame for getting around the city?
1
Help with choosing steel frame
1
Unknown brazed steel frame