Would a person standing on the top tube damage a carbon fibre road bike?

I was riding my aluminium bike and I met some people who had been trapped in a locked park, so I helped them escape by holding the bike against the fence and letting them stand on the top tube to climb out.

If I had had a carbon fibre bike instead how much risk would there have been of serious damage to the bike? I understand that carbon components are engineered to be strong in certain directions and relatively weak in others.

At the risk of getting beat up on carbon will give it a try. CF seems to be a sensitive subject.

If I had 4 bikes I need to use as step stools I would go with this order (and I really have all but aluminum):
1) steel
2) titanium
3) carbon fiber (CF)
4) aluminum

There is a bit of discussion and comments that bearing weight on the top tube is not a stress a bicycle is designed for (and weak). That is a stress a bike must handle. If I take a tube and hold it at both ends and try and bend it that is the same type of stress as if I took the tube and put either ends on rocks and pushed on the middle. The primary force a top tube takes is bending from the ends. If you watch the video you can see top tube bend and when it fails the two pieces are bending displacement.
Santa Cruz Bicycles - Test Lab
And you can see the CF held up pretty nicely.

CF takes criticism as it fails brittlely which is true but it takes a lot to get it to fail.

I would not want to ride any bike that would fail with my weight on the top tube as that is a scenario (crash or drop off) I expect and need it to not fail.

With that said there is not one CF. A lot of variance in the construction / layout. If you are going to ride a CF then buy a good one.

I don't mean to advertise a brand but Niner has 5 year warranty including racing. I have crashed my Niner Air 9 Carbon hard and not even thought twice about the bike. I use it for CX training at a local park and stand on the top tube to stash my jacket in a tree.

I am just amazed at the slow acceptance of CF frames. When CF forks first came out there was a lot a questioning. But now CF is the dominant rigid fork. A fork takes a lot of stress from a lot of directions. People think CF is too light to be strong.

I get engineers are misunderstood (and certainly under appreciated) but a simple one foot drop landing on the front wheel is going to put more stress on a top tube than your weight. The frame did not even flex in the picture. I would not ride a frame I could not jump on. 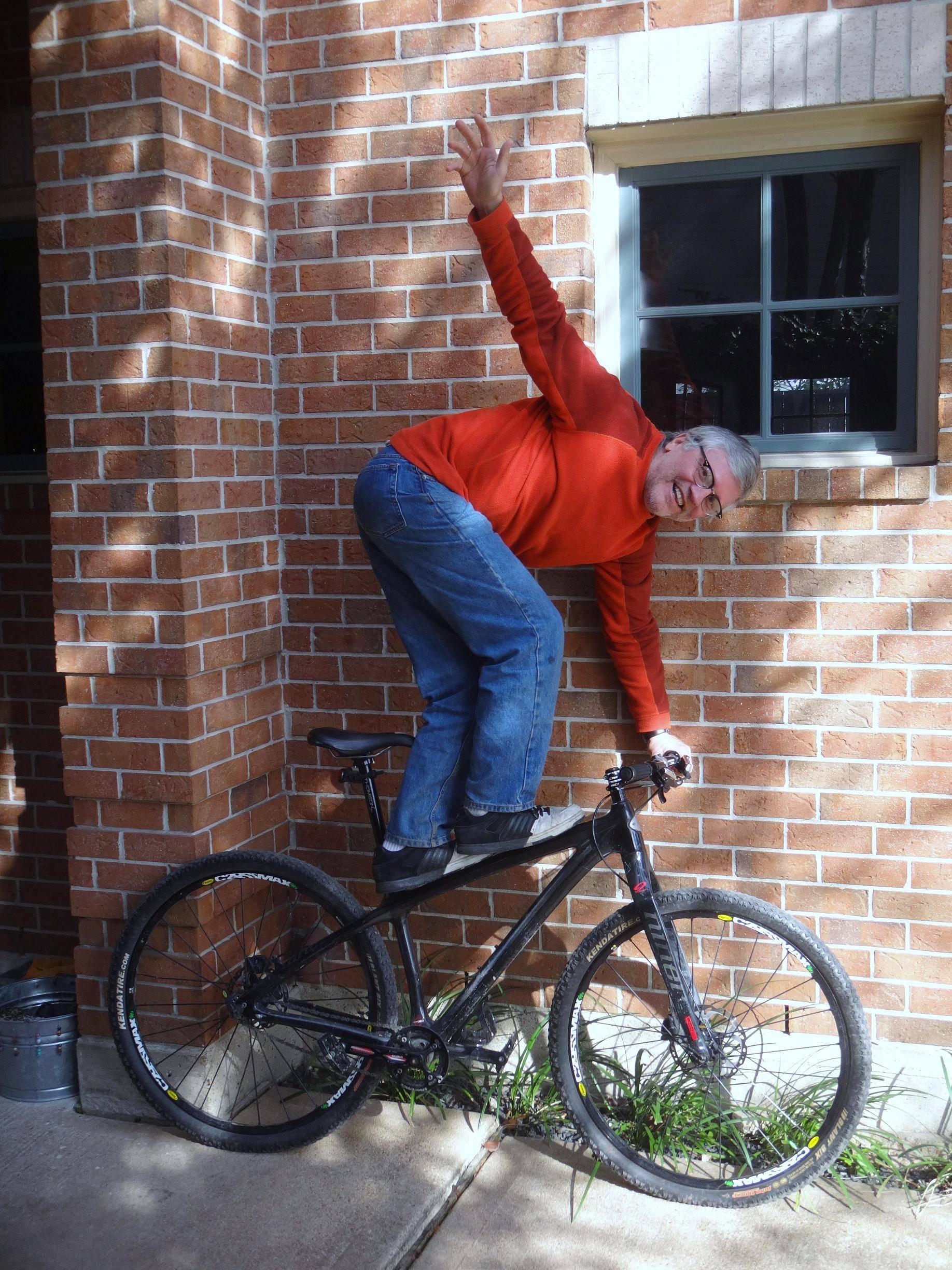 You could theoretically damage any frame in that manner. Tubes are meant to support a load from either end, not in the middle. No bike is designed to support a great deal of weight on the top tube. Theoretically carbon, steel and titanium could all flex/bend and resume their normal shape, where aluminum couldn't, but nonetheless it still isn't a good idea with any of them.

There is so much variation in material you could easily make a thick walled carbon frame that would stand up to such abuse or a paper thin steel frame that would bend and fail instantly. You are correct that carbon can be designed to be stronger in some directions that others, but it's still being shaped into a tube (or some variation of) that design and has it's own inherent strengths and weaknesses.

Bicycle frames are lightweight structures that have great strength when supporting the loads that the road imparts. Normally the top tube would experience compression or tension due to the weight of the rider. It also needs torsional stiffness to keep the bike stable. It is not designed to take the bending moment of a persons weight in the center. Aluminum bikes tend to have large diameter tubes for torsional stiffness and this gives them bending stiffness as well. Localized buckling of a thin wall is also likely.

Carbon fiber frames are not light because the material has magic properties. Carbon fiber has great axial strength it is true but much of the lightness of the frame is due to the finite element models that help designers put material exactly where it will do the most good. Before I would let anyone use my $3000 frame for a stepladder, I would think seriously about that.

I would not be afraid to let anybody stand on my carbon fiber, aluminum, or steel bike. If standing on the top tube breaks the bike, it would be liable to break after any minor mishap, and you're safer getting it repaired or replaced. Bikes are sturdy -- even CF road bikes.

Not the answer you're looking for? Browse other questions tagged road-bike carbon or ask your own question.