I am shopping around for a high end commuting bike. Several reputable manufacturers, including Batavus and Trek are using rims with 9x4 spoke hole pattern. Here are a couple examples: 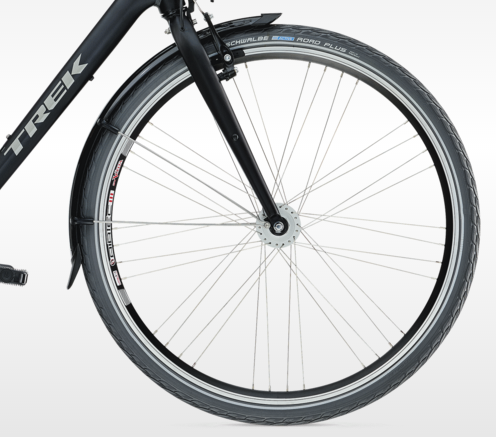 Is this just a silly fad, or are there non-obvious advantages to this spoke hole pattern / lacing for commuter bikes? I'm thinking maybe you're less likely to stress spokes with your U-lock as long as you stick to the gaps...

There are technical differences about the lacing that the photos do not tell us. Like where the holes are placed in the rim. To my knowledge, the idea that spoke holes in a rim did not need to be regularly symmetrical geometrically was pioneered, at least in recent times, by Rolf wheels. As these wheels seemed to work well, other manufacturers responded quickly with variations on the traditional spoking systems. And continue to do so.

The gains by the alternate spoking systems are always related to weight and air resistance. Some manufacturers may try to convince the buyers that they are also more reliable.

If I were racing bicycles, on the road or elsewhere, I would seriously consider these alternate spoking systems. As a racer, weight, and aerodynamics, are paramount.

As a tourist or a commuter, on the other hand, sturdiness and fixability are paramount. My equipment must stand up to abuse, with minimum maintenance. And it must be fixable by me. Easily.

Now, I do not claim to know of these spoking systems specifically. However, I do know that traditional spoking patterns have had about a century of practical usage to work out the bugs.

I know this. I can replace a spoke on a traditional spoking pattern. I can ride the bike if one spoke breaks, at least for a while, until it can be replaced. I can true a traditional spoke pattern. And I do not have to buy special spokes.

And what advantage would I get from a new spoking system? A few grams of weight advantage? A tiny amount of aerodynamic improvement? Since there are many other, far simpler and more reliable, methods to affect both metrics, I would opt for traditional, tested reliability as a high priority.

So, the Batavus link is, as I write this, bad. The Trek link works, but I cannot tell enough detail from the site to speak more specifically. But, in general, I would strongly distrust such innovative spoking patterns for use as a commuter. Really, as a commuter, you just want to get there. You don't want to have any issues.

Your question: "What is the difference?" Specifically, I do not know. But if the difference is weight, then I can tell you to ask yourself why is this good for me as a commuter. And I can tell you that traditional spoking patterns are reliable, and strong, and durable. You can fix it if something goes wrong. With a traditional spoke pattern, you won't be asking questions - you will be riding your bike. With an innovative spoke pattern - none of these metrics are a certainty.

I can not see any advantage to this layout, except maybe threading a U-Lock or similar through the wheels is easier with some wider gaps.

Where I live, the biggest concern I would have is durability. It would seem evenly spaced spokes would produce a stronger wheel. Since there are 'big' gaps in spoke placement around the rim, I would fear hitting a pot-hole in the wrong place would quickly dent the rim.

Visually it seems the spokes are all still the same length, but that is another question to ask. It would be a drag to have different length spokes if one should ever break.