Will disc brakes aggravate the problem with spokes pulling through the rim?

I am hoping that a mechanical engineer can give an educated answer to my question here. I am concerned about this because I have always had some trouble with spokes pulling through the rim on the rear wheel of my touring bike. (I use a 36 spoke wheel.)

I am trying to make the point that the relatively small forces associated with pedaling, all of which are transmitted through the spokes, already cause the rear wheel and tire to fail much faster the front wheel and tire.

Now consider that the rear brake alone can cause the bike to decelerate at a rate of about 5 times that which we can accelerate with the pedals, implying about 5 times the force to the wheel.

When a traditional brake is applied, the forces are transmitted from the brake to the ground, primarily through the circumference of the rim. While there will certainly be some additional forces on the spokes, I don't believe it is substantial.

With a disc brake however, all the braking forces must be transmitted through the spokes. Isn't it logical then to assume that disc brakes will cause even more problems with the rear wheel and spokes than a traditional braking system?

I asked a bike dealer about this, and he insisted that this wasn't a problem. He then went on to show me the new Surly Disc Long Haul Trucker. Curiously, this bike has mounting brackets for carrying 2 spare spokes.

I would suggest that this is either a really dumb marketing gimick, or Surly has a significant amount of trouble with broken spokes on this bike and does this to assuage customer complaints. In my mind, one is just as likely as the other.

To repeat, do disc brakes aggravate the problem with broken spokes or spokes pulling through the rim?

Edit: After reading the comments, I would like to explain that I am trying to understand the differences between a disc brake and a traditional braking system in the way the braking forces are transmitted from the ground to the bike frame.

I tried to analyze the problem myself using force vectors, but lack the ability to reason through the problem. I suspect that disc brakes cause a great deal of additional stress on the spokes and rim, but simply do not know. That is why why I posted the question.

2nd Edit I didn't intend to imply that I have a significant amount of wheel problems. I've been riding for over 30 years and at one time or another, I have been stranded at the side of the road for busting virtually every part on the bike, except the wheels. (Seat rails twice, seat post, frame, rear axle, bottom bracket, chain, pedals twice). I was only asking whether disc brakes aggravate wheel problems, of which we all have some degree of trouble with.

The rear wheel doesn't see more abuse solely due to forces from pedaling. It also supports much more weight, and they are dished (except single-speed wheels), so spokes on one side bear significantly more load than the other. As Sheldon Brown says: "If you have the same number of spokes front and rear, either the front wheel is heavier than it needs to be, or the rear wheel is weaker than it should be. "

Surprisingly, a disc wheel can actually be stronger than a non-disc wheel, because it will have less dish.

Disc braking does create some forces that require some consideration when building a wheel, but that is solved by proper selection of spoke gauges.

Disc brakes can offer a significant advantage over rim brakes for touring, as you can have a pretty badly damaged, out of true wheel, but still be able to brake reasonably well, as the wobbly wheel won't affect your braking, which can be the difference between riding vs walking to the next town.

There are many ways wheels can fail in the wild, but spokes pulling through the rim on high-quality rims should not be one of them. What kind of rim does your touring bike have?

So ultimately the answer is no, not necessarily. Like all bike part selections, they have upsides and downsides, and whether it's a net positive or negative depends on application.

Lastly, spoke holders on bikes have been around for far longer than disc brakes.

A hub brake (any kind, coaster brake, drum brake, disk brake) exerts a torque at the hub which is transmitted to the rim through all the spokes, or if the hub barrel is flexible, mostly through all on the side with the brake: leading spokes loosening, trailing spokes tightening -- opposite the load from pedaling. Because this load is transmitted through many spokes, its effect on the tension of any of them is relatively small as long as the wheel has a near-tangential cross pattern and large enough hub flange spoking diameter. The force on any particular spoke is less than that of the weight load, which is carried by reduction of tension of only a few spokes at the bottom of the rim. It would help to read Jobst Brandt's book "The Bicycle Wheel" to understand this in more detail.

You are overthinking the problem.

Ultimately the stopping force needs to be transmitted to the center of mass.

In either rim or disk brakes the force is transmitted through the spokes to the hub and via the hub connection to the frame to the center of mass of bike and rider.

You put at least an order of magnitude greater force on a wheel riding through a pothole, than you ever will using your brakes. 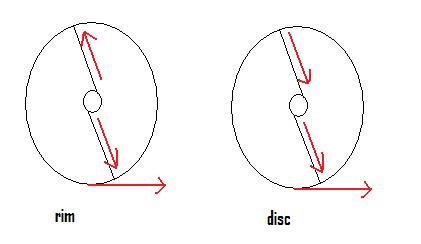 It is as simple as the spokes are between the bike and the ground.
The force has to go through the spokes

I have had two rear rims fail on a tandem, where I accept the loads on the rear wheel are greater than a solo. The rear braking system is a disc brake. With a disc brake I would expect that the torsional forces in the hub (is that the right term?) are greater than on a rim brake where the stopping motion is applies to both sides of the wheel. With a disc brake there must be greater stresses set up on the side of the disc. I am not sufficiently competent enough to do the maths so I can't say whether this is significant. The only reason I can come up with for the failures is that we live in a hilly area and use the rear disc a lot during a ride. The current rear rim (our third in 4 years) is, we've been told, a more robust rim. Time will tell.

I think this is a great question and a lot of people here are arguing complete nonsense.

As you mentioned, the braking is applied from the disc THROUGH the spokes and to the rim/tire whereas on rim brakes, the braking does not go through the spokes.

It's obvious disc brakes involve the spokes more, and Giant agrees - if you look at the 2018 TCR disc and non-disc variants, you will see the disc variant has far more spokes - these are the exact same frames: 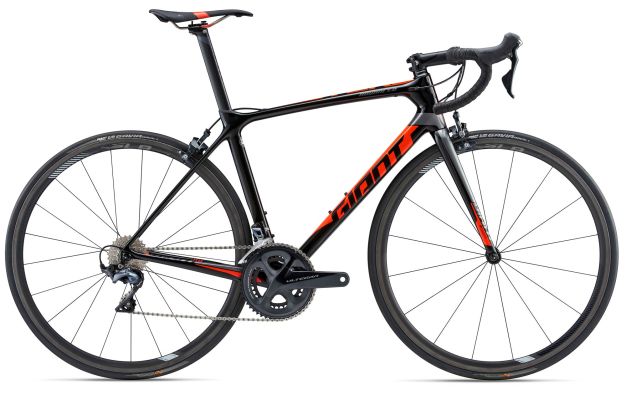 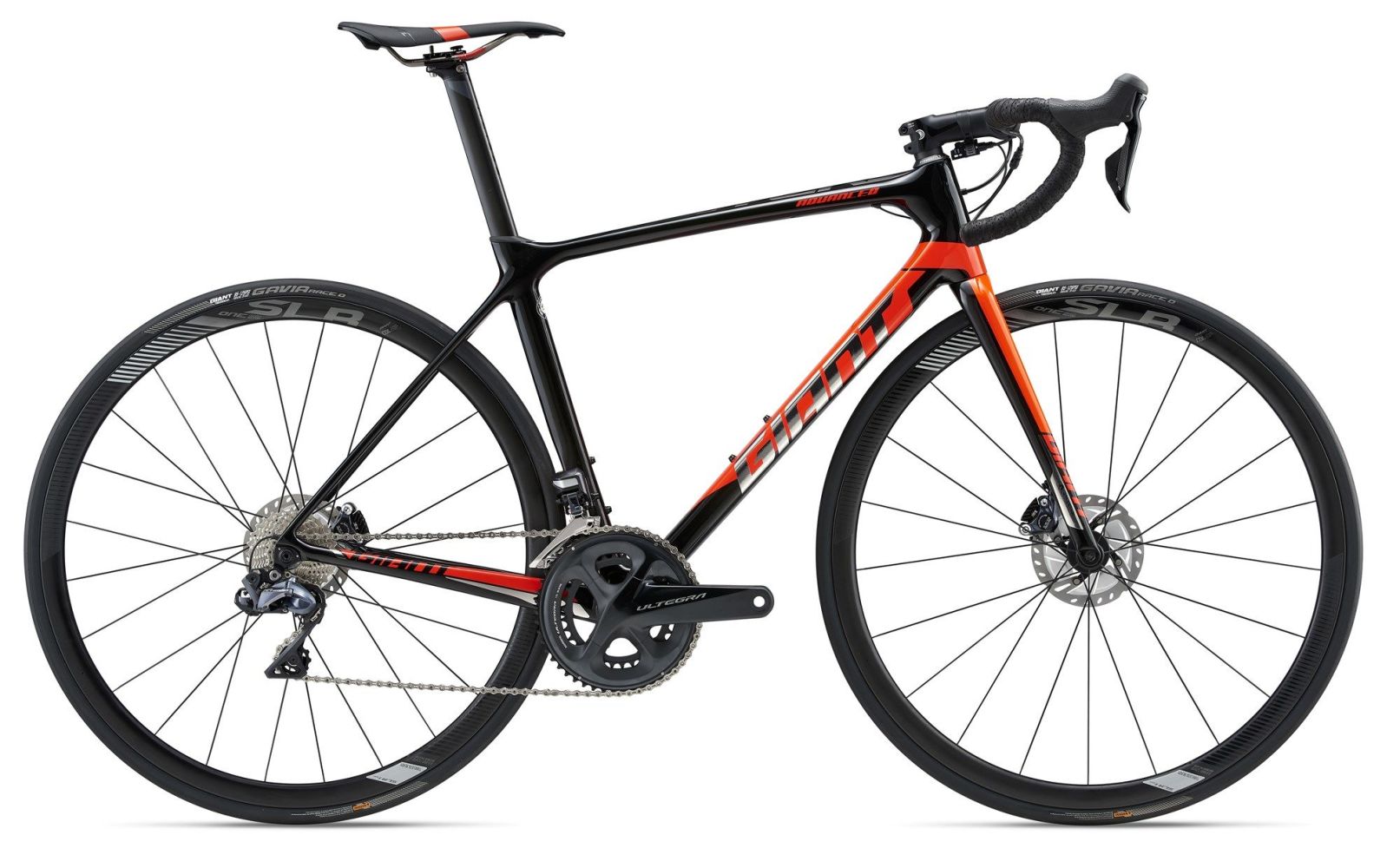 Not the answer you're looking for? Browse other questions tagged brakes wheels or ask your own question.

7
What bicycle design factors affect stopping power?
1
Disc brakes and single walled rims - is there something to worry about?