What does the term pannier really mean? Does how the bag is hung matter?

This question drew my attention to pannier here. I just thought that panniers are things that hung on bike. The Wikipedia definition with Google gives:

A pannier is a basket, bag, box, or similar container, carried in pairs either slung over the back of a beast of burden, or attached to a bicycle or motorcycle.

So can I call every bag that hangs even a little on a bicycle a pannier like a handle-bar bag? Or is it essential that it is in pairs? I have panniers-looking side bags but they are not really in pairs rather separated similar bags, I bought them separately. So what are really panniers? Do they need to be attached to one-another or can they be separated? What about if I lost one, is it still a pannier or is it a piece of pannier? When I have a small bag like triangular bag or something else hung from the bike, is it a pannier? Probably not, is the proper idea to think about panniers like a bags on a donkey i.e. rather large bags?

I think that in English a 'pannier' usually refers to something hung next to the wheels, whereas a 'basket' is hung on the front.

But in another language i.e. French a 'panier' is rather a basket, or perhaps a rack.

In English, panniers originally referred to bags slung across the back of an animal (such as a horse), such that the weight hung down on either side of the animal. This keeps the weight lower so that the animal won't be as off-balance, and distributes the weight evenly.

A pannier could attach itself to the side of a rack (typically via hooks), or you could have a single unit where two side-bags are attached to each other and held on by the attachment between them sitting on top of the rack. The attachment could be as little as a strip of cloth, or as much as a whole third bag that fits on top of the rack. Even if it's one unit, something that hangs on both sides would be pluralized as "panniers" while a single bag on one side is singular ("pannier").

If a bag is designed to fit on top of a rack without hanging down the sides, it's not a pannier. Typically those would be called a "rack bag".

Generally I think people use "pannier" to refer to just one bag on a rack of the bike. It can be on either the rear or front rack. If there is a set of two or more bags, panniers is used to refer to the whole set, but again, one bag on its own is just a pannier, regardless of whether it's a part of a set.

There are other types of bags (not hung on racks) that I have never heard anyone refer to as panniers. These include: 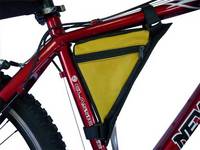 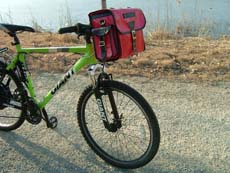 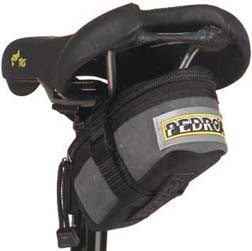 17
How do I make my pannier bag less smelly?
13
What does "claiming the lane" mean?
9
Does the term "domestique" have negative connotations?
7
When riding with a single pannier, does it matter which side it's on?
17
What does 'campy' mean?
3
How can I fix the hook of a weather proof pannier?
5
What does 'tire clearance' mean?
11
Why are most commuting panniers designed as shoulder bags and not backpacks?