I'm the fool who didn't wash the snow off his bike - it's a rusty mess.

I've just taken apart the front disc brake as it was rubbing. I think that was more to do with the disc being bent, but as I was doing it, I found the disc brake pads (?) are pretty rusty. This is what they look like: 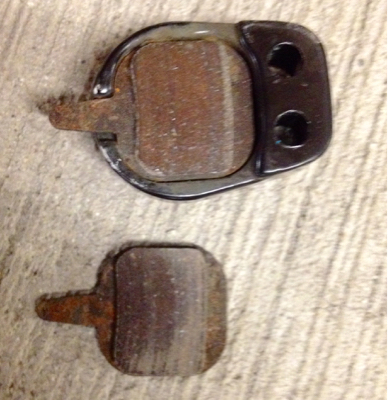 Should this concern me at all? Can I clean them up, or should I replace them? Or are they fine just to be left?

Rust on the surfaces of the pads & disc could cause extra wear & noise, or if bad enough reduce the effectiveness of the brakes. If there is enough present that you can see residue on your finger after rubbing the surface, I would suggest cleaning with a stiff bristled brush or a kitchen scrubber & isopropyl alcohol (some people have recommended automotive brake cleaner too). There will probably still be some rust coloring on the pad, but it shouldn't be enough to cause a problem. After cleaning, you should really inspect the metal around the pad too to make sure it is not corroded to the point that it may not fit the caliper right or could possibly break.

I think the rust on the pad surfaces will go away on its own when you use the brakes. It's probably just a thin layer on the surface. I don't think it hurts the brake disks, since rusted metal is softer than the original metal before rusting.

The rust on the backing material probably doesn't matter much either, since you were still able to remove the pads in their current rusty condition.

By the way, brakes on cars also rust when they get wet and sit for a few days -- you can hear that they sound different the first time you use them after they got rusty. But that doesn't seem to hurt them -- they still last for tens of thousands of miles. I think the technology is similar to the disk brakes on your bike.

Rust or other build-up on your pads is not an issue if you have enough surface left. Depending on the bran 1-2mm on either side is plenty.

If your brakes aren't biting properly clean the pads and rotors with rubbing alcohol. Use an old toothbrush for the pads and a clean rag for the rotors.

If you clean the pads with some brake cleaner and a brush and they just look rusty, it's not necessarily a problem provided your brakes are grippy and effective. If clean them and replace any bent discs and your problems go away, you're probably safe as long as you keep a close eye on things.

In other words, if your brakes are grippy, quiet, and smooth, a little rust never hurt anyone.

Not the answer you're looking for? Browse other questions tagged maintenance disc-brake rust or ask your own question.