Road positioning when stopping at an intersection with stationary traffic

When the light is red and there are cars in a line. Since bicycles ride on the very right do we go ahead to the stop light or stay behind the cars? I live in British Columbia, Canada.

I'm from BC, you have the option of taking the centre of the lane and waiting like a vehicle, or you can stay to the right if there is room (at least 1.5m or 5ft). If you stay to the right, basically you ride in an imaginary bike lane if there isn't one painted on the road, so you ride all the way up to the light on the right hand side of a line of cars at a red light. I do this pretty much every single day on my way home from work. Some intersections even have a button for cyclists to push, like the kind pedestrians push when they want to cross, but for cyclists waiting at the intersection. 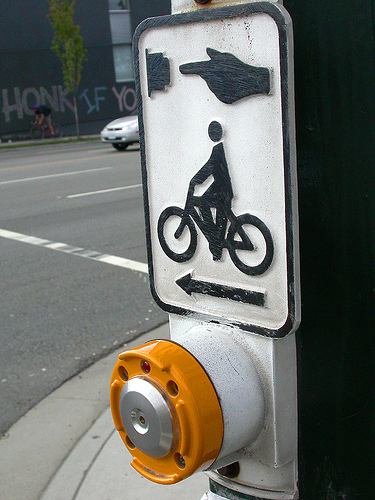 When you stop however, do not stop beside the car at the front to the line, you never want to be in a vehicles blind spot. Pull up just ahead of it and make eye contact with the driver so he knows you're there. If the first car in line is signalling to turn right, then stop just behind them and wait for them to turn in front of you before proceeding to the front of the line.

Motorists are supposed to shoulder check when turning right at intersections to check for cyclists, but it's my experience that most motorists don't even know that bikes are allowed to ride on the road, so always drive defensively.

Like ShemSeger I am also located in BC, but it is my understanding that there may be more legal grey surrounding the topic than the blanket approval Shem is suggesting.

Passing on the right

Passing vehicles on the right between intersections, especially in congested city traffic, is a topic of debate, even in the courts. Under appropriate circumstances, case law suggests that cyclists should be able to legally pass slower moving traffic on the right where the curb lane is wide, provided they are cautious.

Most often it is best to shoulder check, move into the middle of the lane and line up with the rest of traffic. This will also prevent motorists from making a right turn into you as you enter an intersection.

When cycling in narrow-lane traffic where many motorists attempt to squeeze past you before each traffic light, some cycling instructors suggest the following: Rather than moving up to the first car, which will likely re-pass the cyclist, it may be more strategic for the cyclist to proceed only as far up the line as the last cars likely to make the next green light.

It is legal to pass on the right:

When NOT to pass on the right:

If you are not in a bike lane it is NOT legal to pass on the right if the car is going straight or turning right. Also if you have a line of cars turning left, but one car is not you may be entering some legal grey areas. BikeSense BC seems to suggest that the case law may be in flux and that decisions/blame may be decided on a case-by-case basis. This is not the same as a blanket approval as suggested by ShemSeger.

I typically get in line with the cars and take my turn. I like to take the space to ensure I am seen and re-enforce the concept that bicycles are vehicles. I typically only lose a few seconds in doing this.

If there is a dedicated bike lane I will cautiously move up on the right. Over the years I have also encountered a number of erratic drivers. They do not signal their intention to turn right (so you can't anticipate sudden movements) and often fail to perform shoulder check.

During rush hour these drivers sometimes dart out to the right when they decide the line is moving too slow. Someone I knew was caught under a large tractor trailer in this exact scenario. Luckily as he heard crunching metal he was able to roll out of the ways of the trailer wheels. His bike was turned into a pancake but he escaped with his life (and injuries).

I don't intend to frighten you, but provide some caution about sticking the right balance between saving a few seconds and riding another day.

Depends on whether there is a bike lane or not. In Canada, a bicycle is legally a vehicle, and unless you have a clear lane which you are permitted to use, you are required to wait behind the other vehicles. Note that a paved shoulder (pavement to the right of the white line) is not a bike lane when not clearly marked as one.

This is very good question as it touches one of the most common safety issue which most cyclists ignore.

If you are on the road without bike lanes, you must stay after the car, just like another ca would do, not the right/left side of a car. The reason is the safety.

If you stand on the right side (or left if you are in left-sided country), the car which is on the side of you may or may not notice you and may decide to turn right/left. This is dangerous as you can be easily hit this way. Also, even if a driver notices you, the car usually moves cautiously until you are not aligned with it anymore, which slows down the whole traffic.

I don't know if it's 100% legal, but I figure if they're going to pass me on the left as we're approaching a redlight, I'm going to pass them on the right after they're stopped at the light. Turnabout is fair play. As someone else wrote don't pass or pull alongside the last car in the queue as they might want to turn right on red (left on red in left hand drive countries).

31
Which states or countries have stop-sign-as-yield laws for bicyclists (Idaho stop law)?
24
Passing cars on the right, and later merging into their lane
2
How to avoid riding on a gravel on the road sides? + Riding through traffic lights
25
Discouraging motorists from stopping at an intersection when they have the right-of-way
10
Is it rude to take the lane, then filter when encountering congestion?
22
Is my stopping dangerous when Idaho Stop is de facto but not legal?
14
What to do when a car turns into a side road (etiquette)?
9
Which traffic light do I have to follow?
7
How to cross major road 3 way intersection
4
How to read the traffic light at this German intersection?