what power did alex dowsett put out during his hour record?

Alex Dowsett recently set a new world hour record of 52.937 kilometres, how much power did he have to produce for an hour to be able to achieve this feat?

training power
Share
Improve this question
asked May 4 '15 at 7:37

We cannot know exactly unless Dowsett's team releases it, but we can make a reasonable estimate. The most important unknown is Dowsett's drag area, or CdA, so below I have calculated the power needed to average 52.937 km/h for various values of CdA, given the assumptions noted on the figure. Notably, rho is air density in the velodrome and a trackside observer provided the estimate of 1.16 kg/m^3; Dowsett is listed as 75 kg for his "official" weight so 85 kg is an estimate of the rider plus bike plus shoes plus helmet plus suit; eta is drive train efficiency and for fixed gear bikes with a good chainline losses tend to be around 2.5%; and the coefficient of rolling resistance for track tires on a smooth wooden velodrome surface will be in the range of .0025 to .003. Thus, if Dowsett's drag area were around 0.195 m^2, his average power would have had to have been about 400 watts. 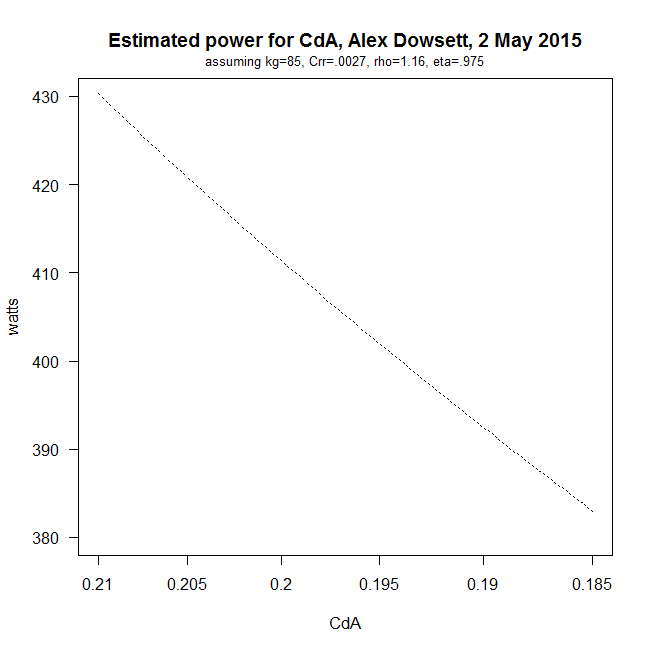 According to Canyon, it would be approximately 400 watts average. Since an hour record attempt requires that there be no computer on the bike to be official, a more accurate measurement is unlikely to be available.

5
How accurate are the power numbers from a Tacx Flow?
4
How accurate are indoor trainer power meters?
1
Allen Coggan Table - Formula for a best fit to time frames
3
Is it worth separating your vo2 max wattage's on the flat and hill climbs in order to provide clearer goals during training?
1
Which are better for reproducible power output: Mag- or Fluid-trainers?
3
How stay fit enough to make moderately hard rides a couple times a month?
2
Good cycling goals?
24
Pedaling at different gear ratios on flat terrain: what's the point?
20
How can I keep improving after my first 30km ride?
2
Upgrade path to use Stages Cycling power meter on Octalink