At a San Diego bike shop I saw a machine that is purported to take the tension out of a wheel while it's being built so that the tension won't be released when you first start to ride it.

Description: Machine is larger than a wheel and it has hydraulics that stress the wheel to relieve tension in spokes.

I'd like to find out more about this machine, but I couldn't find the name of it in order to google it. What is this machine called? Links to manufacturers?

I can't find a current reference or photo, but we used to have one at my previous shop. If I remember correctly it was manufactured by J.A. Stein, but that may be wrong. It was a professionally made copy of a popular homemade wheel building tool.

It was called a Stress Relief Box. It consisted of a 6 inch deep box, about 3 inches wider than a 700c rim. There was a a hole cut just about 2" smaller than the rim in the top of the box, so that when a wheel was set on top of it, the rim was supported, but the spokes and hub were not touching anything. There were inserts to allow use with smaller wheels as well.

There was an metal arm that straddled the wheel, which looked like a taller, and wider version of the Park tool dishing tool, with a lever that allowed pressure to be safely placed on the center of the hub.

In this version, there were no hydraulics, but it would appear similar to a hydraulic press, or there could be more versions of them. There were lots of homemade ones, so there is also a possibility that it was a DIY version. I know a guy in Seattle who was working on a Arduino controlled version which was supposed to allow you to set a tension level.

The one we had worked well, and required minimal setup, although it took up space. I haven't seen one in any shop since, and I can't find a current reference, so it may be off the market.

This a very rough diagram of what it looked like: 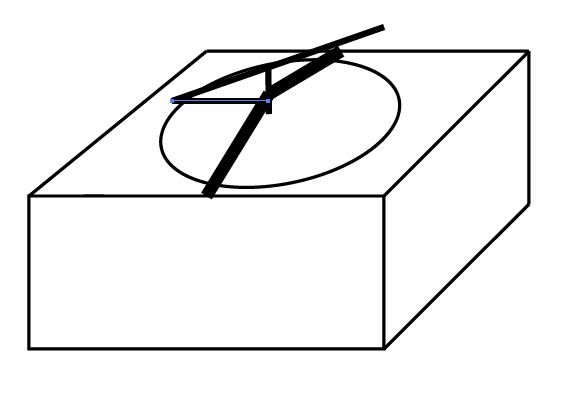 The BMD "wheel stabiliser" accessory for their wheel building machine may be what you saw.

The process is known as "stress relieving" but I can't find any reference to a dedicated machine either. The wheelbuilding machines are fairly easy to find once you get through the description pages (ex Shenzhen New Canghai Machinery Co) but I couldn't find any stress releiving machines.

I found the BMD link in the search results for "bicycle wheel building machine" above by going to the manufacturer pages then looking for related machinery. On the BMD page I clicked their "products" link since it seemed likely that someone who makes the building machine would also make the stress-relieving one.

Its done on a BMD machine. What you see are the mechanics of pushing on the spokes. This will set the spoke head in the flange of the hub and the nipples in the rim. Than the nipple keys that turn the nipples additionally unwind the spokes after truing. This will give a long live and stable wheel (Bob at BMD).

Not the answer you're looking for? Browse other questions tagged wheels wheel-truing wheel-building or ask your own question.

9
How to build a wheel
12
Why offset the rear rim to the hub and not the hub in the frame?
12
Spoke tension is way off but wheel is true, How do I fix this
3
Tensioning rear wheel?
23
Spokes keep breaking - bad hub or bad build?
5
What does a “dished” wheel mean? How to tighten spokes on such a wheel, without a spoke tension meter?
7
What tolerances should I use for spoke tension when building a wheel
4
What does the truing “release tension” step do?