How come my bike has such a short seat post?

The bike is a 1983 Dawes Galaxy and upon trying the raise the saddle this morning, I found this stubby little thing. 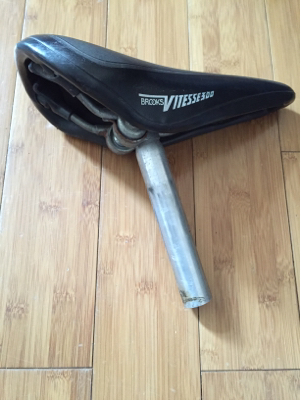 Is this normal for bikes of this age? In either case, why so short?

seatpost vintage
Share
Improve this question
asked May 17 '15 at 14:09

As bhell already mentioned, seat posts on older bikes (or those with straight top tubes) tend to be shorter in relation to newer bikes "designed" for the same body measurements. The reason for this is explained well by Sheldon Brown:

On the other hand, why shouldn't you ride a "too small" bike? "Because the seat and handlebars will be too low!" That was a good objection ten years ago, when tall seatposts were a rarity and quality handlebar stems were available in a variety of forward extensions but only one (short) height.

All that was before the mass production of the mountain bike. Now 250 mm and 300 mm seatposts are stock items, and a variety of excellent handlebar stems are available.

So, basically, people used to fit a bike to a specific person differently than they do now: They would first find a frame size with the best combination of seat tube length and top tube length (in that order of importance) and then would fine-tune the horizontal position of the bike's contact points (seat and handlebars). This contrasts with the more modern method of choosing a frame with the best top tube length and then the best seat tube length and then fine-tuning the vertical position of the bike's contact points with e.g. spacers for the seat post and headset. This was done because the frames of yesteryear were not scaled proportionally:

Up until the early '80's, this was a fairly easy question to answer. You would stand over the frame of a bike, and if there was an inch or two between the top of the top tube and your tender parts, that was the right size. Bikes commonly came in frame sizes two inches apart, so there was not much question whether the 21" or the 23" was the "right" size.

At that time, in the world of mass-produced bikes, the difference between different size bicycles was that the larger sizes had longer seat tubes and head tubes , so the top tube was higher. This was usually the only difference between frame sizes.

In a given model, the height of the top tube would vary, but the length of the top tube and every other part of the frame would be same, whether the bike was a 19" or a 25". A person who buys a 25" bike is likely to have a longer upper body than someone who buys a 19", so the larger rider will likely feel cramped by having the same length top tube that puts the handlebars too far away from the 19" rider. The only concession to this difference was that the better builders would supply a stem with a longer reach on larger frames, and a shorter one on smaller frames.

This all changed when the Japanese got serious about the U.S. bicycle market, and modern bikes are generally built with "proportional sized" frames. This means that the smaller sizes have shorter top tubes, and the larger sizes have longer top tubes. This is generally a great improvement, particularly for riders of "average" proportions.

For road bikes of that age, showing just "a fistful of seat post" was considered good frame fit and style. Otherwise the frame was likely too small for the rider. Of course that was before the advent of sloping top tubes. If the bottom bracket is not too high, stand over height of the top tube should be no problem even with such small seat post extension.

Who says its the original seat post? (It likely isn't.)

There are maximum amounts of insertion (determined by the frame; there may be things inside the frame or weird shaped tubes) and minimum lengths of insertion (determined by the seat post; if its not inserted enough, you can damage the seat tube or worse) -- it is unlikely, but someone may have needed to meet these constraints and chose this seat post. For example, the person found they couldn't get the saddle low enough without hitting something in the frame, so they cut the post to the point where they could get enough of it into the frame and get the saddle low enough.

More likely, its not the original seat post, and someone just had it laying around and used it.

In any case, if its too short, go buy another seat post (of the right diameter, material) such that you can put the saddle in the right position with sufficient insertion -- they're like 20 bucks if you don't want something fancy.

Not the answer you're looking for? Browse other questions tagged seatpost vintage or ask your own question.

23
How do I keep my seat from tilting back?
12
Metal seat post with carbon fiber frame?
2
Seatpost won't let me set my saddle "level"
15
Why do some triathlon seatposts go straight up and down instead of at an angle?
4
Are flip saddle posts available
4
What does this rod inside the my american classic seat post do?
0
Why are post ~'80s bike finishes so "dull"?
6
'Micro adjust' saddle clamp not allowing fine enough adjustment (on SP12 suspension seatpost)
3
How to install a saddle on a seatpost with a top facing bolt