How to decrease belly fat while cycling?

I've been cycling for about 1.5 yrs now doing about 1.5 hrs on a daily basis. I've been able to tone my muscles but I cannot lose my belly fat. Does anybody have any idea to decrease belly fat while cycling?

You cannot outride (or outrun or out-any-other-exercise) a bad diet. On top of that, decades of research shows it's impossible to "spot-reduce".

Outside general weight/fat loss, strength and endurance exercises targeting the area will tone the underlying muscles, but will have little to no effect on your spare tire.

I had the exact same issue. I was on a swim team and biking to work every day, but staying the same weight. It changed when I started replacing carbs and sugars in my diet with fiber, protein and fat. This meant eggs instead of cereal or toast at breakfast, a big salad instead of a sandwich at lunch, and avoiding pasta, pizza and tortillas at dinner. It also meant wine instead of beer and 75% dark chocolate instead of ice cream.

Use the Glycemic Index (measure of how much sugar pours into your bloodstream after eating) of the food in question to know if you should eat it. A bagel might seem healthy, but it has a higher glycemic index than Coke. Avoid oatmeal. Eat eggs and sausage instead. It seems counter-intuitive, I know.

Without the rise and fall of blood sugar making me hungry, my appetite got under control and I felt less sleepy.
I dropped weight so fast, I started feeling too cold in winter and couldn't make automatic doors work any more (OK, just kidding in that last one).

The problem is that like most diets, it is tough to stay on this one and when you do slip, it kicks off that blood sugar roller coaster.

An 80kg person who rides vigorously for an hour burns about 2600kj of energy.

There is 37000kj in 1kg of fat, which is equivalent to the energy spent over 14 hours of vigorous riding. However, depending on the intensity, much of this energy will come from glucose in the muscles, so to burn 1kg of fat it might take 2 - 3 times longer. Say 28 to 42 hours of riding.

However, riding will also make you hungry, and if you eat too many carbohydrates they will be stored as fat, negating all that exercise.

One solution that is becoming popular (again) is a low-carb high-fat diet (e.g. mcgyver5's answer). In this diet you replace most carbohydrates with fat. The body adapts over a week or so to using ketones (from fat) instead of glucose (from carbs) as it's main energy source, going into a state of 'nutritional ketosis'. Many people lose weight without exercise on this diet. Once you are used to the diet - 'keto-adapted' you can use fat more efficiently, and most of the energy for riding will come from your fat stores instead of glucose. You should have less hunger after riding and avoid hypoglycaemia (bonking).

I have been on the diet for about 7 weeks, and ride casually between 30 mins and 1 hour a day, with some rides up to 2 hours with friends. I've lost 6kg over this period, and my brother on the same diet (but much fitter than I) has lost that belly fat you talk about. However, I have noticed on some rides I got leg cramps. The may be due to lack of water or salt. Some people recommending upping salt intake and taking magnesium supplements. 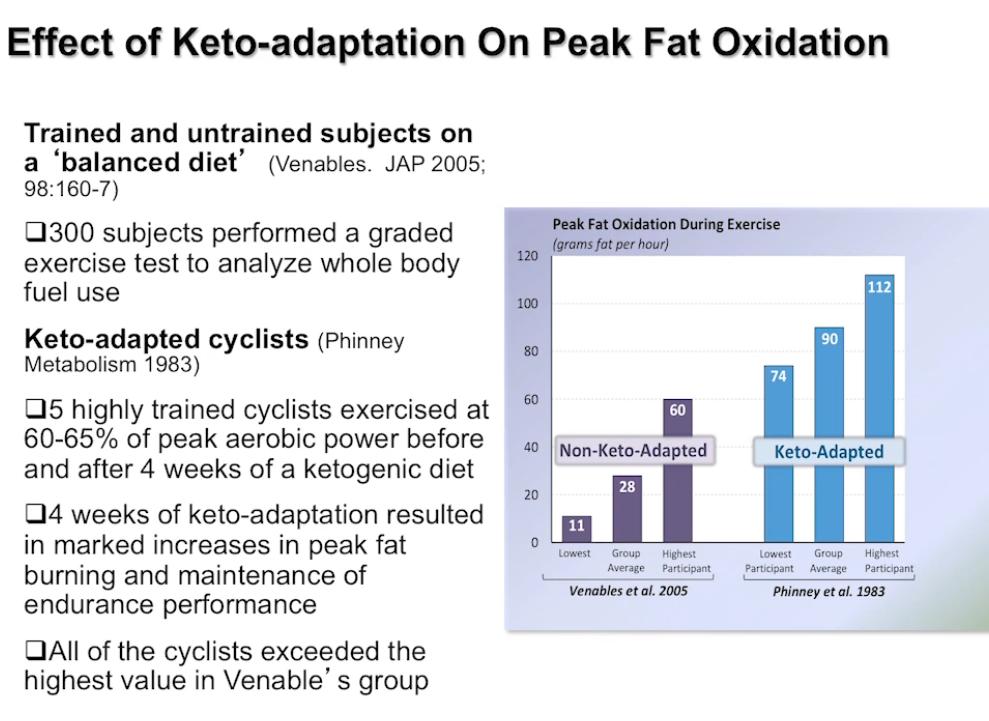 The graph below shows the range of ketone bodies in the blood for various states of ketosis. Nutritional ketosis is 0.5 to 3.0 millimolar. Keto-acidosis occurs above 10 millimolar. From what I've read, keto-acidosis only occurs in diabetics and alcholics and won't happen on a LCHF diet. e.g. http://www.lowcarbdietnews.com/what-is-ketosis-and-should-i-worry-about-it-on-a-low-carb-diet/ 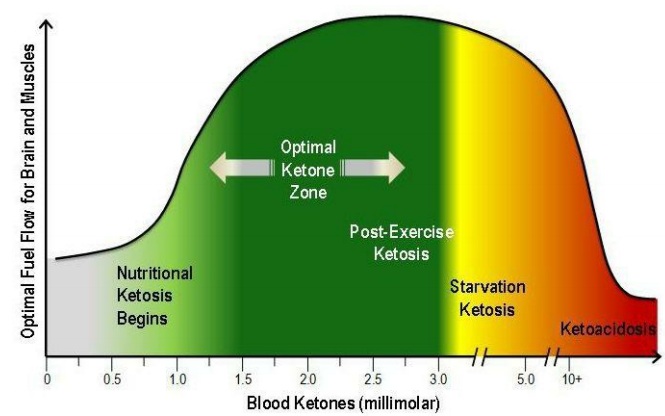 what worked for me was serious, hard, (90 to 100% ) maximum heart rate interval rides. any good cycling training book can give you more specifics. they only need to be done 2/3 days a week. the other days you can ride in a more relaxed/recovery ride type of way. a lot will depend on how hard you are riding presently, if your heart rate isn't high enough, you wont see the results you are looking for. a good training book and a heart rate monitor could make the difference. Weight training for the large muscle groups, (butt & legs) would make difference as well.

When you exercise your muscles burn two fuels;

a) fat
b) glycogen

Glycogen is carbohydrate stored in the muscles. Glycogen is quick and easy to metabolise, fat is slow and hard. Your body burns these fuels at different rates depending on how intensely you are working. At a low heart rate you burn more fat than glycogen. At high heart rate you start burning more glycogen because the rate at which you can metabolise fat isn't enough to supply the necessary energy.

The answer therefore is to take regular long rides (2 hours or more) at low heart rate (heart rate zone 2). Try and do 3 or 4 long rides a week. To get this right you might want to invest in a heart rate monitor.

I would disagree with those suggesting high intensity exercise. All this does is quickly exhaust your glycogen and that's going to stop you exercising and make you want to eat more (when your glycogen levels get low your body releases chemicals that make you crave carbohydrates). 2 hours at zone 2 will not exhaust your glycogen so you should not feel the need to eat more. I would agree with those suggesting you also improve your diet. Its easy to reduce your total calorie intake by cutting out the crap, eg sugary soft drinks, crisps and other snacks.

Not the answer you're looking for? Browse other questions tagged health fitness or ask your own question.

12
How can one maintain cycling fitness as one ages?
4
How do I maintain my weight while cycling more?
22
Why Do I Need a Better/Lighter Road Bicycle to Train For 'Fitness'?
17
Does pedaling while standing damage my knees even if I don't feel pain?
11
How can I stop my toes from going numb on long rides?
16
How much of a difference does giving blood make to recreational cycling?
1
Cycling's effect On The Bladder?
34
I am a beginner to commuting by bike and I find it very tiring. Is it my fitness level or my single-speed bicycle?