What's the most secure type of bike lock that costs less than $30?

I already have the cable cable kind with the combination lock. It just seems cheap and easy to break into. Is that sufficient or are the U shaped ones better?

Honestly, I must say that there is no such thing. Sometimes you can find a U-lock used on Craigslist or similar websites and you might get a better deal. Otherwise, $30 is below bottom-of-the-ladder for U-locks.

And think about it. What are you paying for with that 30-50-even $90? It's a one-installment insurance policy on your bicycle. I would suggest that you lay down some real money and get a good lock. If you don't, you can either

My frivolous answer: Really. Maybe you shouldn't spend a bunch of money on a bike lock. If you get a cheap lock, the bike thieves will have no reason to learn how to open the more expensive type which will leave my bicycle all the safer!

Bike locks cost real dough because they are designed to stand up to real abuse.

I once had a job where I routinely went around a park with a pair of huge bolt cutters, removing the bike locks (and sometimes bikes) that were abandoned there. The cheap locks are a hellva lot easier to cut off of railings than the beefy OnGuard types.

You do get what you pay for, here, at least in the range of $0-50. Cheap locks are almost not worth buying. A $50 U-lock will stand up to several tries with a pair of bolt cutters that have three-foot levers attached to the handles.

Summary: a cable will [only] stop 'casual' thieves who don't carry a tool with them; and would be no deterrent to a regular/professional thief.

You're much better off with a D lock (U lock) because they're harder to remove without the key. A cable lock can be cut through with a cheap tool that's easily carried in a pocket. Cheap D locks are pretty similar to each other, but avoid the cylindrical key types (if you can still find them) because instructions on how to pick those quickly are all over the internet.

The comment below about smaller locks being more secure is correct, but with the proviso "if used correctly". A smaller lock is often harder to use correctly. The larger locks make it easy to lock the rear wheel + frame to a poorly located pole or fence, so are often more secure in a specific situation because they can lock your bike correctly where a smaller lock cannot. I use a small D lock (ABUS Granit) but have locking QR skewers (pitlocks) so don't need to lock my wheels separately.

Without knowing your location a specific recommendation is not possible - I would use my LBS but if you're not in Melbourne they might not be the best choice. I used google and found this online site which seems to have a reasonable selection.

Smaller locks are harder to break than big locks - if you know there is a rack that is thin enough to lock the frame to.

Having a cable/chain as well gives you more options - a chain is harder to snip. 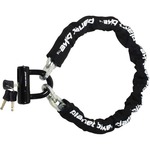 Two locks are always better than one - even if it just causes the thief to look at the next bike.

I saw a demonstration where they compared U/D-locks and cable-locks.

Conclusion: Use a very thick lock. Don't look at the type.

Not the answer you're looking for? Browse other questions tagged frugal security lock or ask your own question.

4
Is there a lock rating system in the US?
2
Non U-Lock that can be mounted for carrying?

48
Best type of bike lock (materials, style, etc.)
6
Are there any locking options that lock the drive train of a bicycle?
4
Bike lock for a Mountain bike with easily removable wheels
8
what is the most secure bicycle combination lock?
1
Finding the right length of chain lock for my road bike
4
How popular is the “Sold Secure” certification among reasonable-quality lock makers?
7
Lighter bicycle locks not made of steel
3
How secure are Security Wheel Skewers like Zéfal Lock'n'Roll?
4
Does carrying a chain lock around on the frame reduce a bicycle's performance?
20
Properly locking on a floor mount rack with a U-lock