So I bought a used vintage bike. I just love the bike and it's awesome. However it came with one problem: gears problems. First of all I have very little experience with bike, especially gears (currently watching youtube videos to learn more).

The problem that I have in the bike is three folds:

1- The shifter for the front gear is soft, so there is absolutely no tension when you move it. So if you move it, nothing actually changes in the front gear at all. My question regarding this problem: could it be the shifter itself that is broken or could there be something else wrong? (i.e. like cable problem, or front gear problem itself). I'm trying to troubleshoot the problem.

2- I have never seen such shifters ever before, so if the switchers themselves are broken, are there still old school switchers like these? If so, do they have specific names so I can look them up online? Because when I search for "shifters", I only get the new popular ones!

3- The last problem has to do with the rear gears, the switcher doesn't switch to all speeds and I have no idea what's the problem.

Here are pics for my cool bike :D (so happy about it): 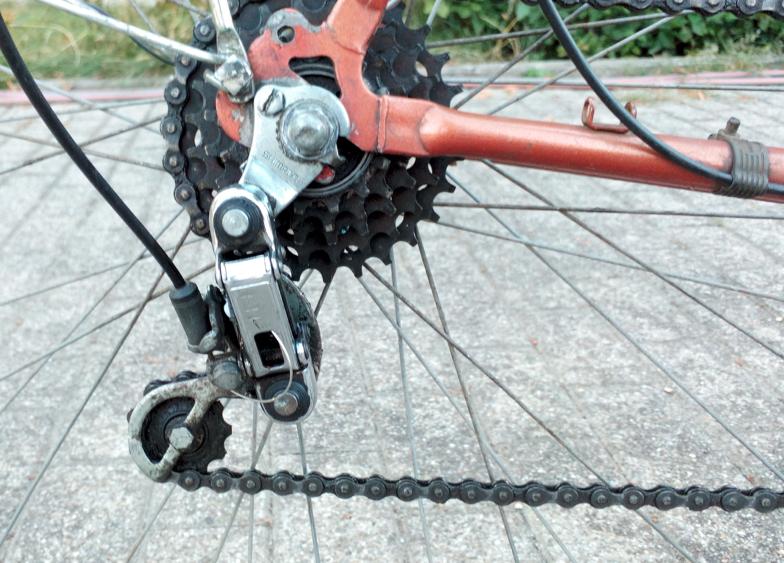 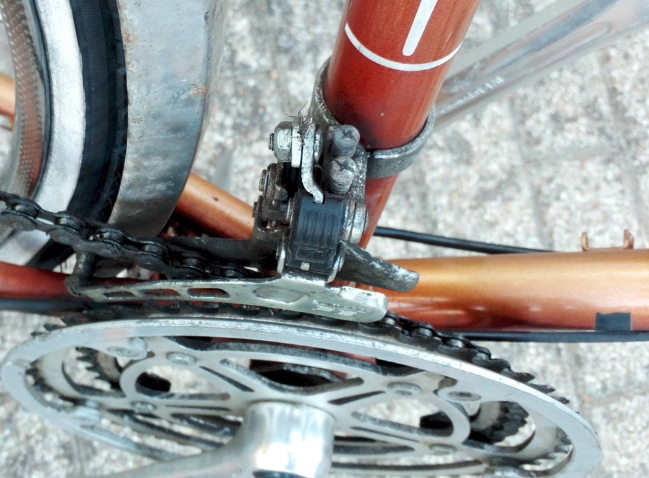 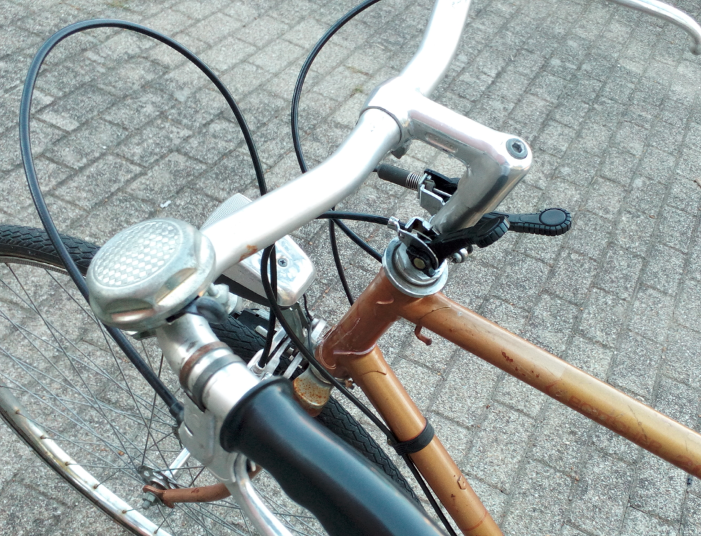 At first glance I see the problem you are having .

This was Shimano's earlier attempt at an indexed gear system. Also known as "Positive Pre-Select" or PPS.

The main differences are that the indexing is in the deraileur rather than in the shifter on the handlebar. As a result, the bowden cable is a full housing and has a thicker solid inner rather than a woven stranded cable.

Upshot - you can't just fit any old cables to the rear mech. However its possible the front deraileur is just a standard non-indexed friction shifter.

There are two (or three) very specific issues that are causing this problem.

Regarding the rear derailleur not working correctly in all speeds: That is a Shimano Positron derailleur, which used a solid wire rather than a twisted cable for shifting. It looks like the wire has been replaced with a cable, which will not work properly at all. Spare wires have not been available for 20+ years, as Positron was considered a failure and discontinued rather quickly. This is definitely the nexus of the poor rear shifting.

Although this is not my usual position on repairs, I would recommend replacing both derailleurs and shifters. When you do, make sure that you add a cable stop to the downtube, so that the cables can be routed correctly. A good shop should have the required parts, or be able to do the work correctly for you. maintenancepositronshifting

These are called friction shifters and you can still buy new ones. You should be able to get better performance from the ones you have though. Note the 2 black plastic wing nuts on the side of the shifter. It is very important to tighten these enough to get the right amount of friction to stop the derailleur slipping out of gear. It takes a bit of trail and error to get right.

As commented above with point 3), you need to set the right amount of tension to get the correct range of movement in the derailleur. You may also need to adjust the small limit screws (with Philips heads) to help set this range.

These type of shifters are tricky to use. You need to listen and look at the gears to see you have engaged the one you want.

The derailleurs (aka switchers) are controlled by the cable that runs between the lever and the derailleur. On most bikes, increasing the tension in the cable will move the front from the inner chainring towards the outer chainring.

That should get you close. If the cables are old they may need replacing, and you should probably replace the housings at the same time. They aren't too expensive.

Those shifters are pretty much bullet proof. It will take a lot to stop them from working. They are really simple. Pretty much all that can go wrong is rust or a loose adjuster (if this is the case you'll be able to pull on the cable, but as soon as you let go it will go right back to the original position). All you need to do this is to tighten the screw on the side of the shifter.

Unfortunately, you own a bicycle with Shimano PPS Positron rear derailleur, cable and shift lever. These things were pure garbage; they seemingly always failed, required unique parts that were ONLY made by Shimano ( nothing else would fit or work) and were not very good.

Not the answer you're looking for? Browse other questions tagged maintenance gears or ask your own question.

1
How to fix the tension in these shifters?

0
swap Shimano Alivio gear indicator for cover plate
2
What's the best way to fix up my used bike?
1
Shimano Nexus 3 stuck on lowest gear
3
Can't shift front gear, despite loosening, tightening, etc. What could be wrong?
1
How to check if the gear shifter or the gear itself is broken?
1
Bent front-derailleur
1
How to fix the tension in these shifters?
2
3- 5 gear special gearset?
2
Shimano front derailleur - tensioning, can't move shifter
0
Front derailleur not shifting up