I'm not sure if oscillation is the right way to describe this, but when I'm riding at speed (say around 35-40 km/h) and take one hand off of the bars, the bars shimmy or oscillate – kind of like they are resonating with something. It's not bad, but it's new – I'm pretty sure the bike didn't used to do this…

Does anybody know what would cause this? Or better yet, what can be done to eliminate it?

In case it matters the bike is a Trek 620. The front wheel is a pretty plain vanilla rim with Schwalbe Marathon tire (32-622) and a Sanyo dynamo hub.

I have two theories that might explain the wobble you're experiencing. Perhaps both have their part in it.

Self stabilizing of the front-wheel (resonance)

Usually bikes are built in a way that stabilizes the front-wheel. The term for it is trail (called "Nachlauf" in the image). It's the horizontal distance between the steering axis and the wheel's axis. On bicycles this is often realized as a slight forward bend of the fork. 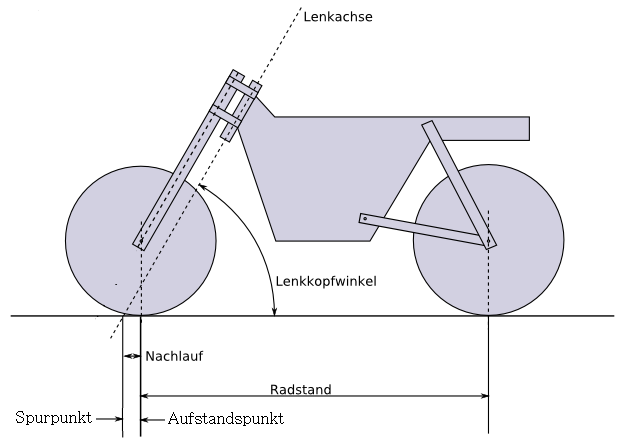 So whenever the front wheel gets a bump there is a force trying to put it back to the straight position. Due to that there is bound to be some resonance frequency. With increasing speed and thus stronger bumps some of bumps are bound to be nearly in resonance with the front-wheel and to create your wobble.

Whenever the wheel isn't exactly in the direction of the driving direction it gets some force parallel to it's rotation axis. As every rotating object it reacts with a movement called precession (just like a gyroscope). Also this gets more intense with speed because of the higher angular momentum and the stronger force on the wheel.

So what would help?

From your description, it's hard to believe that the source is in the rear half of the bike (I'm assuming it also happens when you're not pedaling, correct me if I'm wrong).

It seems to be a fairly minor problem (for now at least), that could be very hard to pinpoint.

If you can't find the problem after a technical inspection, I would just keep riding. If you notice the problem getting worse, inspect it again (it'll be easier to find).

Another possibility that's not mentioned in the other answers is that the plastic reflectors that attach to the spokes can be enough to unbalance the wheel. On my road bike, I found that my wheels would vibrate alarmingly, though it was somewhat faster than you have: around 55km/h. Completely solved by taking the reflectors off; probably a more safety-conscious solution would be to install two reflectors on each wheel so they're balanced.

Not the answer you're looking for? Browse other questions tagged wheels safety handling or ask your own question.

-1
Why does my bike vibrate when going down?

4
Terry front wheel (ISO 520 vs 540), big difference?
0
Product selection help: wheelset for vintage(ish)steel roadbike
2
What wheelset comes on this Trek?
4
How do I replace my rear wheel?
4
How do I remove this back wheel axle nut? 90s Peugeot mountain bike
0
Replacement parts for Trek 7.3
10
Bike unstable (difficult to ride without hands on bars) after changing fork after collision
0
Front wheel shimmy
50
How can I make it clear to other road users that I'm an inexperienced cyclist?