What are the risks of fenders/mudguards?

I've seen fender/mudguard descriptions that mention things like breakaway stays and discussions about the relative safety of metal vs plastic fenders, but I'm not getting what the concerns are.

Can anybody explain what the potential hazards of fenders are and how to mitigate them? The rainy season is coming…

I'm especially interested in full fenders on a road bike.

First, if you're using a conventional cantilever brake (i.e. with a yoke, not a link wire), you need a fender or reflector or something to avoid the yoke catching on the tire.

As usual, Sheldon is excellent.

There are several types of fenders: 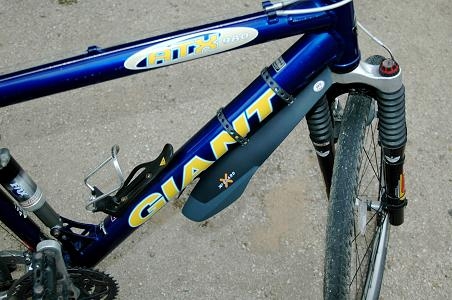 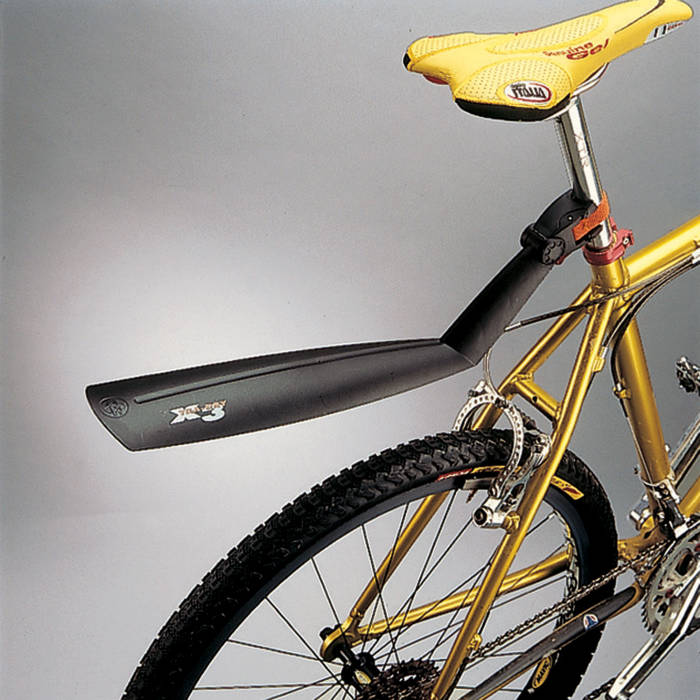 Both of these options sit away from the wheel, clipped on. They can't interfere with the wheel, so coverage isn't as good (esp. for water being thrown up by your front wheel hitting your feet). However, they can work on all bikes. They don't prevent your drive train from being covered in crud from the road (which reduces the lifetime of your parts) or water getting in your headset bearings. There aren't safety issues with these (they can fall off, but nothing should happen if they fall off; they can't jam in a wheel). 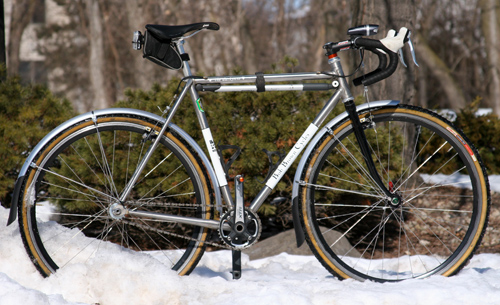 Ideally you want a mudflap on the front. These mount to eyelets on the frame and fork normally, and at the brake bolts (or reflectors or ziptie there). There are also a few clip on ones for this. These prevent crud from being thrown up to your drivetrain and getting into the headset bearings.

The problem with full fenders is that something can get caught between the fender and the wheel or the fender can slip (esp. in the front) and jam a wheel. Then you crash. This is why you see fenders with safety release tabs so the fender will shear off in some way if something tries to get caught in the wheel rather than jam it and crash.

Since the current answers skim over what I think is the key point I'm going to add a late answer.

The risk is that the fender itself can jam a wheel. If a front wheel jams you're almost certainly going to crash, with a rear wheel you might crash.

Good fenders will have a means for every stay to pull away from the bike relatively easily, so that if somehow the fender dos get hooked onto the wheel the fender gets destroyed and the bike keeps rolling.

Bad designs are typically a metal rod bolted to the bike at one end and the fender at the other. They usually look like this: 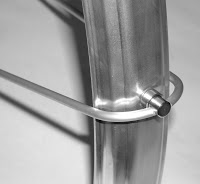 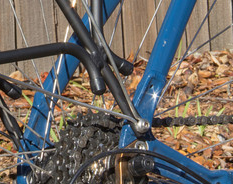 The problem is that if that stay catches on the wheel it will pivot around to some point then jam, stopping the wheel from rotating. You'll note that those are two different images - these days it's less common to find this design precisely because it is dangerous. Sheldon Brown has an exmaple

The easy solution is to use a clamp on one end of each stay, like these: 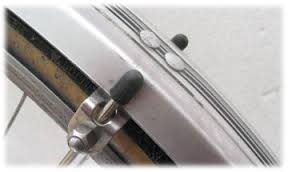 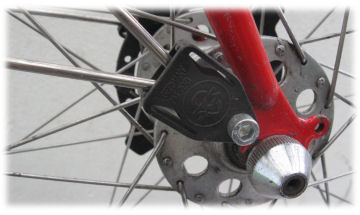 You won't see a single fender with those at both ends (that would be silly), but they should have a clamp at one end. Always.

One thing I advise to to buy fenders where the clamping parts don't fall off when the stay is pulled out. Those on the left above, for example, will lose the end cap and the bolt if the stay pulls out. Finding a small bolt on a dark road is often hard, and while you can usually buy replacements it's annoying. I currently have one bike where the fender is only loosely attacked because I caught the fender on something while wrestling it out of a crowded bicycle park, and couldn't find one of the bolts afterwards. $3 for a replacement bolt, but $10 for postage since no-one locally stocks that particular spare part.

I believe the main accident risk is that something gets caught between fender and wheel and blocks the wheel. If this happens with the front wheel, a crash is quite likely.

This can happen in two ways:

The second point is the main risk. A foreign object on its own is usually not strong enough to completely lock the wheel, but if the fender itself gets pulled in, a complete lock-up is quite likely.

Most modern fenders avoid the problem by

a) placing the fastening points for the wire holding the fender such that in case of a jammed object, the fender is pushed away from the wheel

b) having an emergency release mechanism for this wire, such that it snaps off rather than pulling the fender into the wheel.

One example of this emergency release mechanism is "SKS Secu-Clip" by SKS Germany (see https://arnowelzel.de/wp/sks-secu-clip for pictures). It is basically a plastic part that the wire clips into, such that it can be pulled out when something gets caught in the fender.

If you use such a fastening mechanism, the risk of an accident from a jamming fender is minimal.

The fenders on my MTB is made from plastic similar to those used in scuba fins, so they are fairly flexible, so when something does jam, they bend slightly and bend back.

When I first installed them, I installed them very close to the wheel (<1cm), after some very muddy terrain, a couple of small rocks came through the front fender and front wheel causing extra vibration on the front fenders causing the bolts to eventually loosen causing the fender to slip down and grind on top of the wheel. They didn't jam the wheel, but the distraction of destroying my brand new fenders was enough to almost wipe out over a cliff. I've since lifted them much higher and tightened the bolts much tighter and haven't had any issues in the last 1500km. 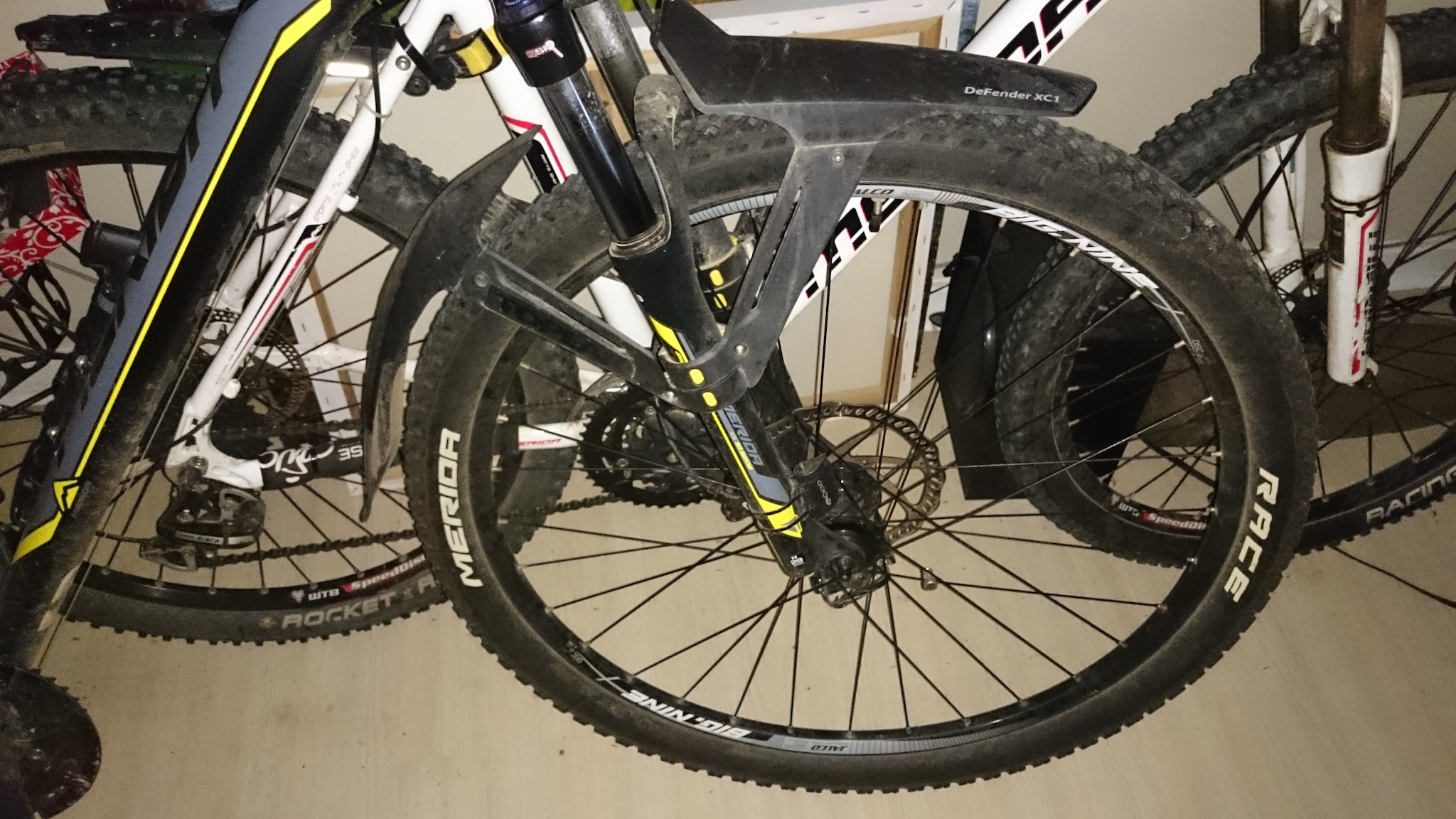 My rear fender is suspended above the wheel - on several occasions the fender either went to the right or to the left causing me to keep on looking backwards to see if the fender is still in place (dangerous if you're in traffic), I eventually had to use thick cable ties to keep it in place since the built-in bracket can only go so tight before the bracket starts coming apart. Also, after a very rocky downhill, the top bolt that keeps the fender's height above the wheel consistent came loose and the fender dropped downwards and started grinding on the wheel, had to tighten up the bolt extra tight and also cable-tie it up so it doesn't slip down again. 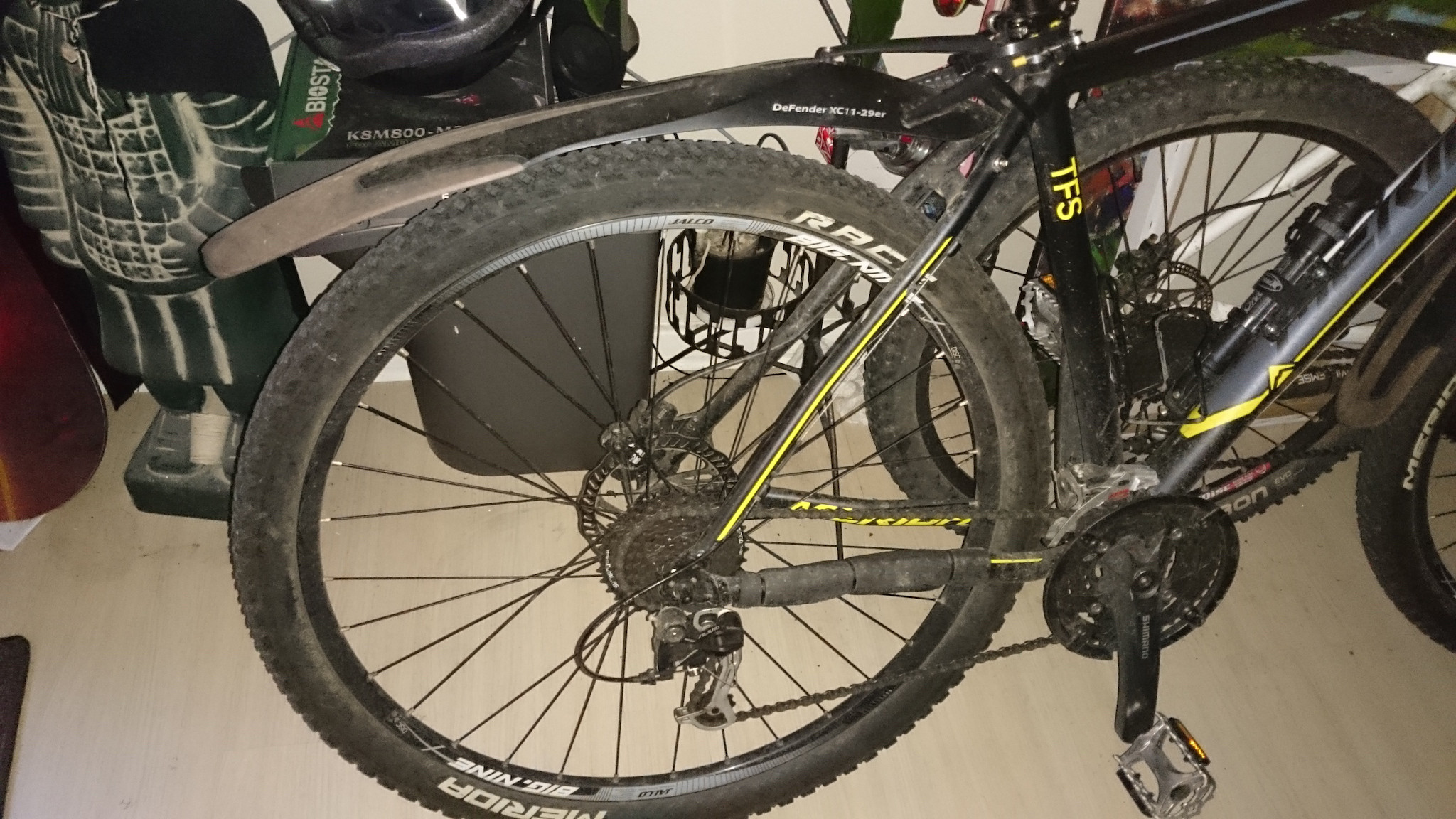 So from my experience, if your fenders have a bit of a lip and they are soft scuba-fin-plastic, they won't jam your wheel, but they are still dangerous enough if they drop onto the wheel and distract you from what is in front of you.

Today I got launched over the handlebars because of the front mudguard getting stuck in between the front wheel and the tire. It was a SKS type guard with the safety system. I think I crashed because of it. Somehow it must have gotten loose and as a result it must have started to swing and got caught on the tire. It wrapped itself up and in the air I went... I was riding 30km/h on an ebike. Got away with it with a couple of bruises to my own surprise. Lesson learned --> leave the front fender off. Sturdy attachement means things can get stuck between the fender and the tire, safety attachement has a chance to come off and fender will get caught on the tire.

Another problem, if you're cycling in slushy snow, is that ice/snow can build up on the inside of the fender, and eventually interfere with the tire - especially if the wheel isn't perfectly round.

I wouldn't disagree with any of these judicious comments, but don't let's get things out of proportion. Certainly I'd say it's sensible to equip your mudguards with a quick-release - secu-clips or whatever - but the fact is cycling - riding about on an inherently unstable machine - has its dangers. As has driving a car, or walking down the street. But mudguard accidents are actually rare, I'd suggest - you're more likely to be thrown off your bike by a pothole, and unlikely to be thrown off it by anything if you use ordinary care. But there's always the risk - you just have to evaluate it,and either accept it, or decide biking isn't for you.

Not the answer you're looking for? Browse other questions tagged safety fenders or ask your own question.

2
What are the hazards and risks if I keep using a worn rear tyre?

5
Do mudguards/fenders help? If so, what are the best for a fixie commuter?
26
What are the risks of untrued wheels?
5
Do flat fenders work fine?
2
How to select the fenders for my bike
1
Alternatives to ordinary fenders
8
How should I adjust fenders/mudguards that catch on the tires?
2
Does fitting mudguards / fenders improve aerodynamics?
3
How much water flies forward to the drivetrain
1
Hybrid/gravel bike mudguards/fenders with specific coverage
20
Why are fenders/mudguards undervalued so much?