What is mysteriously slicing the inside of my tubes?

For about the last year, I've had a problem keeping my bike on the road. Originally, my rear tube went flat when the tire was punctured by an office staple (don't ask me how a regular office staple could have been positioned properly on the road and puncture all the way through the tire while I was riding, I can't figure that out either). Since then, every time I replace the tube, it lasts for maybe two weeks and then goes flat again. Each time, the tube gets this mysterious slice along the inner side. Here is a picture of one of these slices. It's very faint; only deep enough to puncture fully through the tube in a few places. 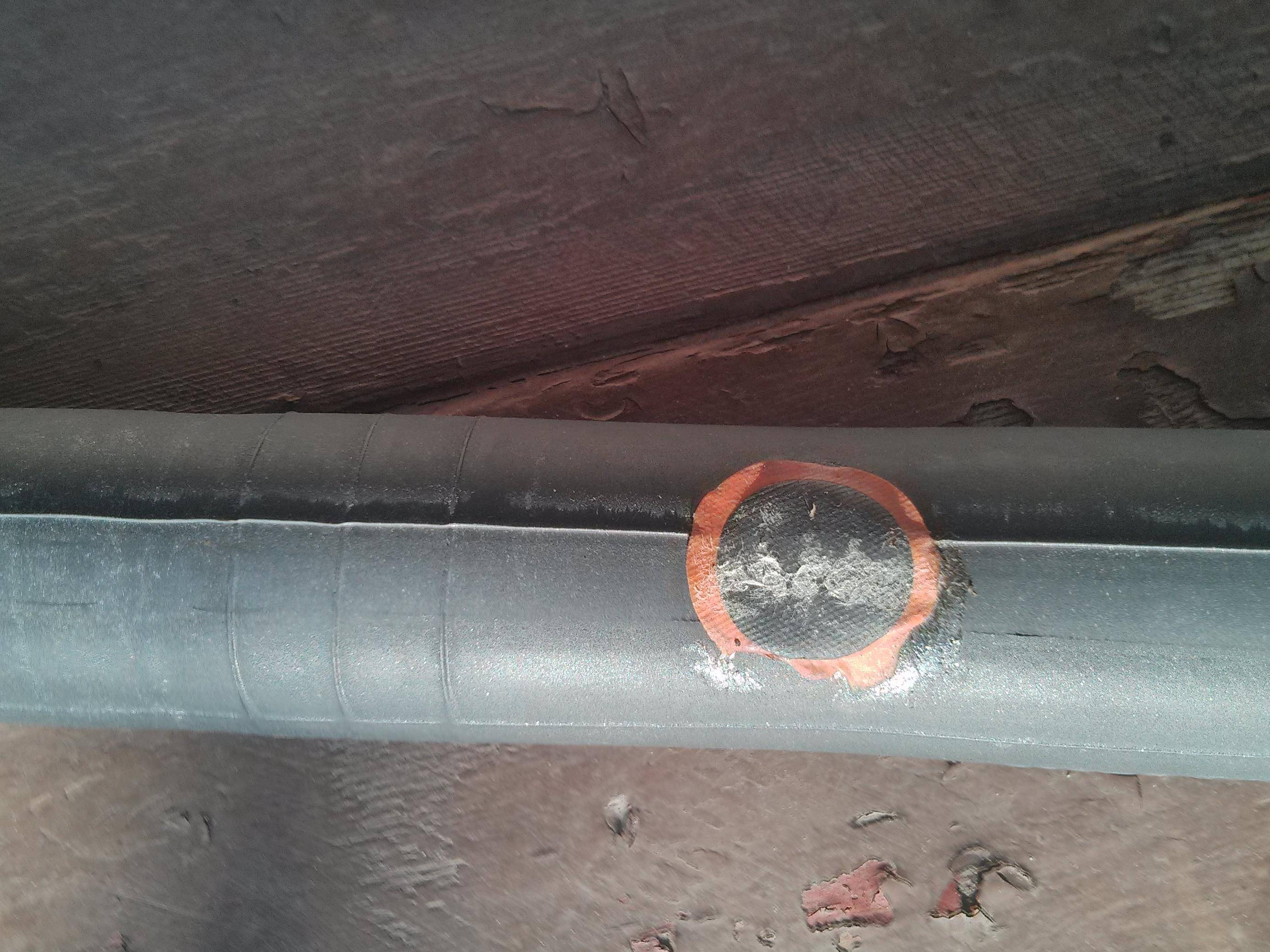 This is a picture of the inner side of the tube. The slice is almost halfway down from the seam and runs across the length of the tube shown here. My patch is covering the largest hole, but doesn't solve the problem.

I also thought it could be due to installation error, so I made sure a few times I had professionals at the shop do the installing. Same thing; about two weeks later it would be flat with a slice like this through it.

Obviously, this has nothing to do with the tire itself, since no part of the tire is in contact with this part of the tube. Given the time it takes to form, it looks like something is gradually cutting into the tube and, after about two weeks, finally manages to wear through it. I've washed the rim thoroughly and run my fingers along it to check for slivers. Nothing. I thought maybe it was the rim strip, the edge of which contacts the tube. That's still my number 1 guess, but if that's it, why is this slice only along a ~20cm section of the tube (I've checked the rest, no slice) and always in a different place along the rim? Why wouldn't it either be in the same place or along the entire tube if it were the strip?

Anyway, this mystery has me stumped and has cost me a fortune in tubes and bus fare (what with a bike no longer being my commute option). To try to mitigate it, I've tried using self-sealing tubes, which obviously didn't work perfectly (lasted an extra few days though) because they are more suited for punctures on the outer side of the tube. My next thought is trying puncture-proof tubes. If I can't figure out how to stop these slices, I figure puncture-proof tubes would be thick enough to give me a few extra weeks per tube.

TL;DR: What's causing these slices in my tubes? How can I prevent it?

I agree with your diagnosis: it must be related to the rim tape.

Take it off and inspect it and the rim below. If you don't find anything obvious, buy new, good quality rim tapes, check there are no sharp edges, and reinstall.

Your solutions have all pretty much been said, it seems to be a problem with the rim. However, instead of just checking the rim tape, check the whole inner rim to make sure there are no metal shards or other pokey things embedded in the bottom or inner walls. This happens a lot with v-brakes especially, so be aware.

Speaking of brakes, I also wanted to mention that you might have a look at your own. Usually an overlooked source of the problem, brake condition/position can play a crucial role in your tyres lifespan.

I would personally get the rim tape of and give it a good inspection and clean. If you suspect anything from that, replace it.

I would also check spoke tension in case your wheel is knackered and spokes are pushing through. This shouldn't be the case and if it is, you need a new wheel. Having said that, you may have a bit of spoke protruding through the nut in to the body of the rim, you might be able to swap it out for a new spoke.

Check the tyre too. If, as you say the offset from the valve changes each time, think what else would be aligned differently after a puncture repair? Inspect the bead, carefully run your finger or better still some sort of cloth that easily catches. Something that acts like silk does but don't use silk unless you're minted.

Replace the tyre, they're relatively cheap and if you're spending all your cash on tubes then you may as well try and eliminate one element sooner rather than later.

More of an aside, your patching could be better. You want the glue to cover a decent area that extends beyond the patch size and let it dry before applying the patch. By doing that you'll get an instant grab on the patch (so get it lined up well) and press it down thoroughly working from the centre out. The feathered edge should be less likely to peel up then but you'll still need to coax it off the backing a bit. Use the chalk to dust the whole area afterwards.

8
Why do my tires keep losing air, even after having the tubes replaced?
3
What could have caused this flat?
3
Third tube puncture in 3 weeks
4
4 punctures in one week, even after replacing tube and tire, what's happening?
5
Why do I keep getting cut looking flats?
3
Inner tube - series of dot marks and a puncture, what has caused it?
1
What is the maximum weight could 26 1 3/8 tire and tube could withstand?
0
Keep getting flat with road bike tires
1
Tube size is different on rim and tire