I would like to go on a solo two weeks bike trip in Europe (mid & east). I am planning on camping (with a 2 person tent), so will not go to any hotel. This means that I will be buying food supplies on the way. It will be my first experience of bike touring, and I am planning on visiting cities along the way. My bike equipment would look something like this: 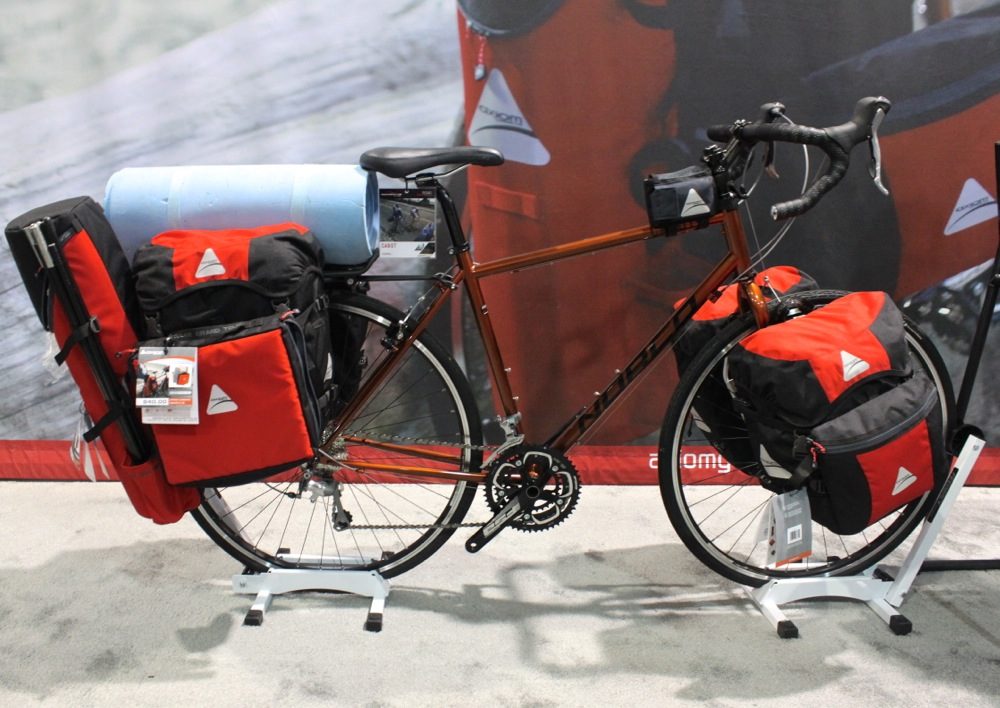 How to secure/transport my bags while:

The easy answer would be: "Just take your stuff with you", but I don't feel like carrying 4 bags full of equipment + a tent. So I am wondering if there's any experience bikers out there that have tips&tricks for me. Cheers !

I use two different strategies for the short and long absences.

visiting a city by foot

When I'll be away from the bike for a long time I take the valuable stuff (cash, id, small tool kit, phone, charger, camera) and leave everything else. If I'm in a formal camping area or in a secluded location I'll leave the tent pitched and my sleeping bag and clothing inside the tent. In most of Europe you should be able to do this if you're officially camping, but seclusion seems unlikely (in Australia and NZ we have public wilderness areas where there are few people, so camping where no-one goes is possible).

If I'm not camping or otherwise need to leave the gear with my bike I'll look for somewhere that I can lock the whole thing in a room. Either the luggage area of a train or bus station, a backpackers or hotel, or a bike shop. Those will generally cost a small amount of money, but it's cheaper than losing easily-removed stuff or discovering that someone has opened everything up and left what they don't want scattered all over the place (has happened to a customer in India).

For short absences I usually just take my chances. I lock my bike using a small D lock and leave it (I have pitlocks so the wheels are locked to the frame, so that's fairly easy). However, unlike the picture above I tie/strap my panniers onto the bike using bungee cords/ocky straps. That reduces load wobbling while I'm riding and makes things less likely to fall off the bike, but it also means that actually opening the panniers is slower.

I will try to park the bike where I can see it, and if it looks as though there's space in a supermarket or mall I will wheel the bike inside and lock a wheel to immobilise it in the actual shop. I've occasionally been stopped from doing that and I just politely accept and park it outside, but more often staff just look at my bike and accept me.

Edit: I also have a vaguely-related technique that I use mostly for city-fringe camping and once in the wilderness when I left my bike for several days. Since I usually sleep in a hammock and carry a few lengths of lightweight rope, I can if necessary hoist everything up a tree. I'll tie my luggage and/or bike to the rope, climb some distance up a tree and haul the stuff up, then lock it to the tree. Even fewer people will notice it if it's above head height, but it takes time and is hard work to do (lifting significant weight using a 3mm line is hard on my hands).

Edit: As @jqning reminds me below there are metal mesh wraps you can buy that might help here (I have too much to say for a comment). I've only used those for backpacks, and my experience was sufficiently poor that I gave the thing away after one trip. While it might have worked as a theft deterrent, it was sharp, bulky and hard to use. Packing it was problematic, as it had to be folded carefully then stored in a bag to protect the rest of my stuff from the sharp metal edges. It was the size of my stove, only less useful.

BUT on a bike that might be less relevant. When touring I'm willing to carry more weight than a backpacker will, and I have spare nooks and crannies on my bike where the ugliness of the shape doesn't matter. You could hang the mesh bag across the front or your handlebars, cram the wrapped mesh in behind your seat tube or under your rack, and so on. The way it would be accessible when you want it but not in the way the rest of the time. With care you could not only draw the bag tight and lock it, you could put your bike lock through it to prevent someone just removing the whole "locked" bundle. The problem might be locking the bag around your panniers, as they're usually designed as drawstring bags and they're not big enough to close around a whole bike. So you'd be drawing it tight around the rear half of the bike, or taking all your panniers off and locking them inside the bag nearby. Or using one per pannier. Still, I think it's worth considering.

I doubt you will find any way of making the bike secure enough to leave alone for hours on end. Perhaps you could somehow fit solid motorbike panniers, but they would be awfully heavy and inconvenient when you do have to remove them.

When buying groceries you basically have the choice of taking the bags with you or leaving them on the bike. What I do depends on the situation. Sometimes I'll put the panniers in a supermarket trolley and push them about the store. Sometimes in the countryside I'll go in a shop to buy some snacks and not even bother to lock the bike. But I always have my valuables in the handlebar bag and that always comes with me.

As for wandering around the city, I would recommend you take a rest day and spend that one night in a hotel or hostel and leave the bike and bags with them. You'll be able to relax without worrying about your stuff and you'll have earned the hot shower and bed.

A company called Pacsafe makes a steel mesh web/net that fits around a backpack and can be used to lock it down. You might find a shape that works for your stuff. It's more of a deterrent than a guarantee but it's a worthy solution.

Here is a link with a good picture. http://m.rei.com/product/709207/pacsafe-55-security-web-small

Get panniers with dual zippers and lock em, or sew zippers on them Also zip tie to frame.

Not the answer you're looking for? Browse other questions tagged touring panniers tricks or ask your own question.

9
How to prevent my bike from tipping over when using just one pannier?
4
How can I tell if a rack and panniers will work with my bike?
12
How to decelerate during long downhill rides and avoid brake glazing
8
How to ensure security of panniers when touring