Can the iBert safe-T-seat be safely mounted behind the seat post?

I have the iBert front-mounting child seat. I've used it previously attached to my street bike as in the below image, but between the straight bars and the shifter triggers, I had to mount it so low that my knees knocked against it while riding, which is a non-starter. 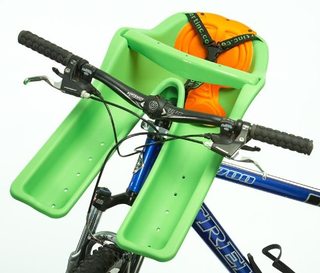 I recently acquired a long-tail cargo bike with cruiser-style handlebars, which I intended to use with the iBert seat. Unfortunately, the stem is fixed-height and does not have the 3/4" straight length between the frame and handlebars required for the T-bar mounting post (see the maker's website).

However, the seat post is adjustable, so I thought I might be able to simply mount this seat in the rear instead. Most child seats are rear-mounted, the seat post seems as durable as the stem, and in this configuration the seat won't be moving side-to-side as it does when attached to the stem.

I can't find anywhere on the maker's website that this is explicitly prohibited or warned against. I have emailed them, but the response I received was that they have been purchased by another company and "appreciate your patience" while they go through that process - no response with respect to the mounting locations. I also don't see anything online that addresses whether it's a reasonable "hack" to mount the seat this way. The mounting bar is a simple assembly with two bolts that I'm sure I'll be able to physically attach to the seat post, high enough to clear the rear rack. What I'm not sure of is:

I am also not sure if the legs of the seat will interfere with the rider in front; assuming it's safe enough for the passenger and the bike, I can test that out on my own.

The bike is equipped with a sturdy double-leg kickstand, such that both tires are in contact with level ground when the kickstand is deployed and the bike is stable for loading/unloading.

Wth the childs's legs sticking forward the way the website suggests, you've got no hope. You could easily check this by fitting the seat and trying to ride without the child -- that way you don't even need to do the clamps up tight. You're also likely to find that the slumped-foward head rest sticks into your lower back and means that you're badly positioned on the saddle -- just what you don't want when you're controlling a bike with an extra load up high.

It's got more support than most front-mount seats but in general they're designed for you to have your arms round the child and your back behind them. This one still has a very low back, and if the child falls asleep behind you they'll be flopping around like crazy and you won't know about it (though this happens even on much bigger rear seats as well, at least then their head can't flop backwards going over a bump.)

Most people I see riding with front mount seats have to ride with their knees very wide to avoid the seat -- and this is a wider seat than I've seen on the road. It seems to me that there's only quite a limited set of bike/rider/conditions combinations for which front seats work: You need to be at the small end of your frame's adjustments, with wide bars, and riding on flat roads where you don't need to work hard to accelerate.

47
Toddler bike seat vs. bike trailer?
3
Child seat (or rack) at the seat post
3
DIY solution for carrying kids on a long-john: ideas?
6
How to properly attach a "tag-along" bicycle
11
Broken stem tube ‚Äì LBS "just" lowered handlebars. Is this safe?
2
Not enough space between front mounted child bike seat and rider
12
Max weight of child, for rear bike seats - why is it always (seemingly) 22kg?
6
Is it safe to put child seat on drivers seat post?
1
Removing cushion from Aldi Bikemate Boodie seat
3
Back wheel jumping out of rear dropout with child transporter