Riding with a big dog [duplicate]

Does anybody have experience with riding with a big (60-70 pound) dog? I took a look at How do you carry a dog on a bike?, but there doesn't seem to be much experience with big dogs reflected there.

What I'm hoping for is a bike setup that would be practical (e.g., easy to set up and go) for errands around town and short rides (30-50 km). It would be a bonus if the bike also worked well for "non-extreme" touring (with dog). I don't think I want to ride with the dog running alongside – there is too much traffic for me to feel like that is safe for dog or rider. The Soma Tradesman looks like a possibility, although I'm not sure that it would work with such a big dog on the platform.

I'm open to considering a trailer, but the one's I've seen and used don't seem to practical for use in a (sub)urban environment. I've seen a bike with a Bob Yak trailer and a biggish (maybe 40 pound) dog "surfing" on the platform, but it seems too risky for the dog without some modification to the trailer.

I trust you used the search function and read "How do you carry a dog on a bike"?

I haven't ridden with a big dog since I was a child, but I have a friend who had one. My experience was that when the dog weighed about the same as I did my ability to ride was entirely dependent on the co-operation of the dog. In my case that was not usually a problem, but when he leaned out to have a look I had to stop. In that respect it's much like riding a tandem.

The main thing is how disciplined the dog is. If your dog will stay in sit or lie when there's a dogfight going on or some other strong distraction, the only question is how you carry the weight. And the Soma Tradesman will do that.

The problem is that you won't be able to effectively strap a dog onto that front rack - it's too small, and you can't fit a deep enough basket to it, so any attachment is going to require a full harness on the dog, and tying the harness to the rack between the dog's front legs. I can't imagine any dog liking that. Otherwise you'd get (at best) strangulation issues when the dog tries to sit up or jump off, and more likely you and the dog will end up in a heap on the ground. At whatever speed you were travelling.

The cheap option that will work is a trailer. Either a second hand on (probably a kiddy trailer since they're more common), or a new one, and ideally one of the ones designed to carry a dog. That way you can enclose the dog so it's not tied in one place, but it can't get out and run amok. A two wheel trailer is also more stable, so the dog moving about won't throw you off the bike (as easily). This article discusses trailers in detail and recommends the Croozer. I have seen decent size dogs carried this way, and one that the owner was happy to leave loose with the trailer open so the dog could jump out and run when it wanted to. I've never owned a dog that I was willing to see killed, so I haven't done that.

If you want to go touring, the trailer will not be ideal and the consensus is that to reduce air and rolling resistance you want a low, single wheel trailer (one vs two wheel trailer)... which will not work with a dog.

My dog-owning friend ended up with a load bike for his dog. Something like a long john will be ok for touring and very handy for carrying loads around town. As with kids, the dog will probably appreciate being able to see something other than your butt. Those are increasingly common in Oz, and I suspect the USA too. They've been common in Europe for going on 100 years. 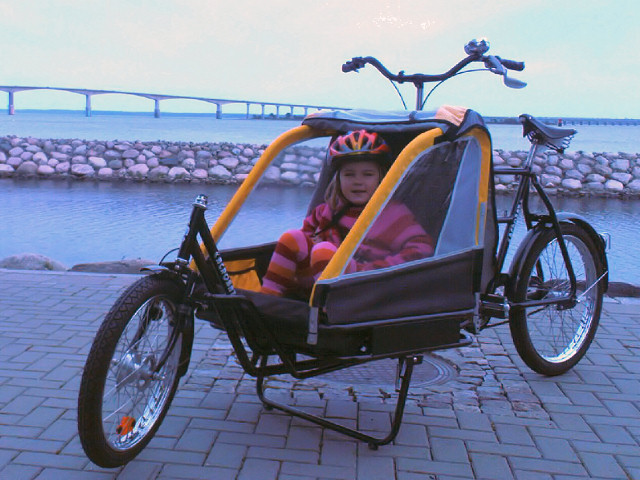 Other load carriers will also work, but you will need to do your own research and balance load capacity, ease of pedalling, cost and availablity.

Just get a used kid trailer and put your dog in there to see if it likes it. I did that with my first dog trailer and my dog liked it so much we didn't upgrade. When we got a second dog I added a wood floor.

I must say though, getting a front-load cargo bike for a big dog would be extremely righteous.

Not the answer you're looking for? Browse other questions tagged cargo animals or ask your own question.

10
How do you carry a dog on a bike?
16
Really big panniers and other baggage
6
How can many people move a car -trailer with bicycles?
7
Will it be a problem to bike uphill with a rear pannier with books (~2lbs)
1
Anyone found a good way to transport kids with a Strida?
117
How do I deal with a dog chasing me when I'm touring?
4
How can I tell if a rack and panniers will work with my bike?
14
Are collisions with animals something to be worried about when cycling in the country?
1
Cargo bike with steering linkage