I have a relatively new Bottecchia bicycle, about a year and a half year old and underwent about 8,000km.

I almost always use the biggest cog on the front cassette. Lately I noticed that as I apply a lot of torque, i.e. when accelerating from a stop (in high gear), or surely when I stand up, the chain slips -- at least that's what I think that's happening. What I actually experience is a cracking noise, the pedals don't effect the chain for a split second, and then it's back to normal. It is important to say that it doesn't happen to me if I switch to a lower gear on the front crank (but it doesn't matter which gear I'm on at the rear).

I have several ideas as to what may cause the problem. Firstly I thought it may have to do with broken or worn off cog. That is possible because I think I may have over-lubricated the chain last time, and I experienced a sand storm. However I think it may not be the case because it happens regardless of where my pedals are (if I had one broken teeth, for example, I would expect it to happen only when my right pedal is at, say, 7 o'clock or something).

Another possible reason is that maybe I have a problem with the front derailleur -- as I started using the middle gear more often, I noticed that I have problems getting back to the top gear (no problem going down) -- I hear cranking sounds, and often it wouldn't shift until I push the shifter further (even though it doesn't move further, it probably pushes the derailleur a bit, enough to make the jump). It also happened once or twice that under torque the chain slipped to the middle gear.

Third reason I could think of is a worn off chain -- as I said it has served me for probably around 8,000km, and I also noticed there's a noticeable gap between the chain and the wheel (I'll post pictures shortly). 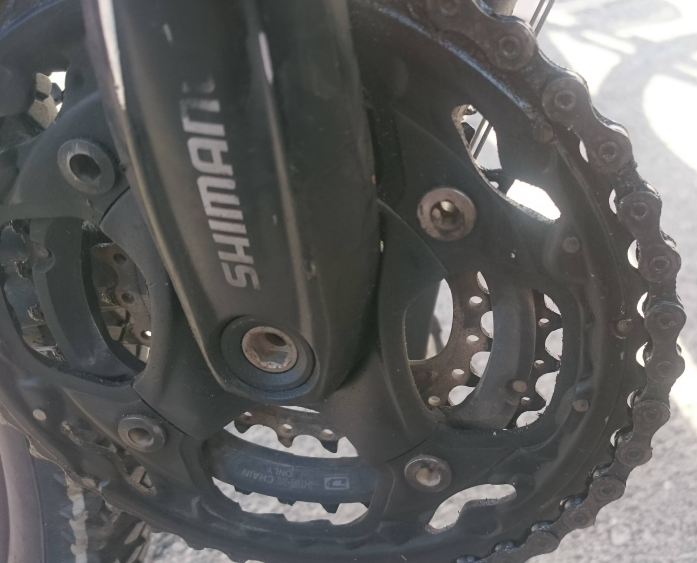 Here are some pictures I took. I hope they're helpful in identifying the cause of it, if not I can take more.

Thank you very much!

Your first image suggests the chain is not meshing properly with the chain ring. After 8000 km you should be either just finished your fourth chain, or about halfway through the second (depending on if your manufacture says 2000 or 5000 km per chain.) How long since the chain was changed?

Do a chain length check too - 24 half-links (12 pairs of inside and outside) should be 12 inches long. Any more than 12 1/8th inches is too stretched. Running a worn chain normally wears out the rear cassette, whereas the front ones tend to survive because of the greater number of teeth.

Finally - use a straight-edge and confirm the front chainring is not bent. This can be seen by eye if you turn the pedals while looking down from above. A deflection could cause a bad meshing.

Over-lubing itself is not as issue. However it attracts dust dirt and sand, which can do mischief on the chain, accelerating wear. Best practice is to clean the chain, dry the chain, and then oil the chain.

Not the answer you're looking for? Browse other questions tagged repair or ask your own question.

4
How do I tell if a loose chain is because of the chain or the ring wearing?

3
Adjusting rear derailleur - shifts to lower gear, but not to higher
2
How to fix problem with mountain bike chain falling off gears?
16
Chain slipping off derailleur jockey
2
Front derailleur doesn't change from grear 1 to gear 2
6
What are the most common causes for hysteresis in the rear derailler?
7
How can I remove a stuck rear cassette?
1
Chain falls to the outside of the chainring, but I can't reproduce the problem
1
When I shift to the smallest cog, it's suddenly too loose
4
Diagnose grinding sound from single rear cog
6
Are bike repair shops averse to changing chainsets?