How to install the cable for this rear derailleur?

For two months so far I'm trying to fix my bike. I bought a used bike and the shifting was not good. So I bought new cables and tried to make the rear derailleur work, but without any kind of luck. The front derailleur worked, except the rear. I'm not able to understand its mechanism. I have a very weird rear derailleur and non of the youtube videos is helping me because they all illustrate new rear derailleurs.

So my questions are:

1- How does this rear derailleur work?

When I push the part illustrated in the picture, then the derailleur moves. However I don't understand how the cable makes that part moves. Because it doesn't move, regardless how high I make the tension in the cable! 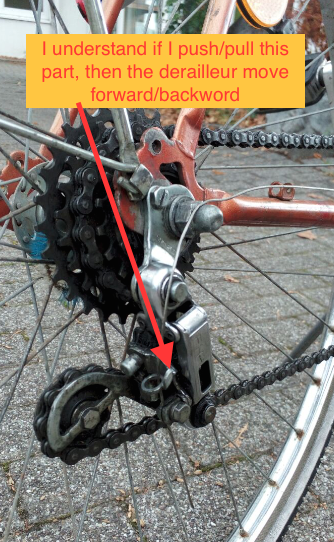 The housing is flexible, but it doesn't compress (much), as a result when you pull on the cable the housing presses where you were pressing with your finger and moves the cage to shift. All you need to do is to add a length of housing similar to the one in the photo.

If you have a length of housing you can cut it to fit. There are cutters that are designed for cutting bike cables, but if you don't have them you can use regular side cutters or a hack saw. After cutting look carefully at the cut and and use a pointy device to open up the hole where the inner cable goes. Sheldon Brown has a post where he describes how to cut cables. If you don't have indexed shifters (and it looks like you probably don't) you can use helical cable which will be a bit easier to cut and clean up the ends.

One thing I can't tell for sure from the photo is if there is a stop for the cable or a barrel adjuster on the derailer. Usually there will be a part called a barrel adjuster where the loop by your arrow is (in the photo below it is the silver part where the black cable housing ends at the derailer) that lets you fine tune the derailer adjustment. Some of them thread into a tapped hole in the body of the derailer, others use a nut on the threads of the barrel as a stop that rests against the derailer. I think that is how yours may be set up (either that or the loop is a cable stop and there is either no provision for fine adjustment on the derailer or it is somewhere else). If the adjuster is missing then there will be nothing for the end of the housing to push against and it will just pass freely through the hole. Your LBS would probably be the best source if yours is missing. 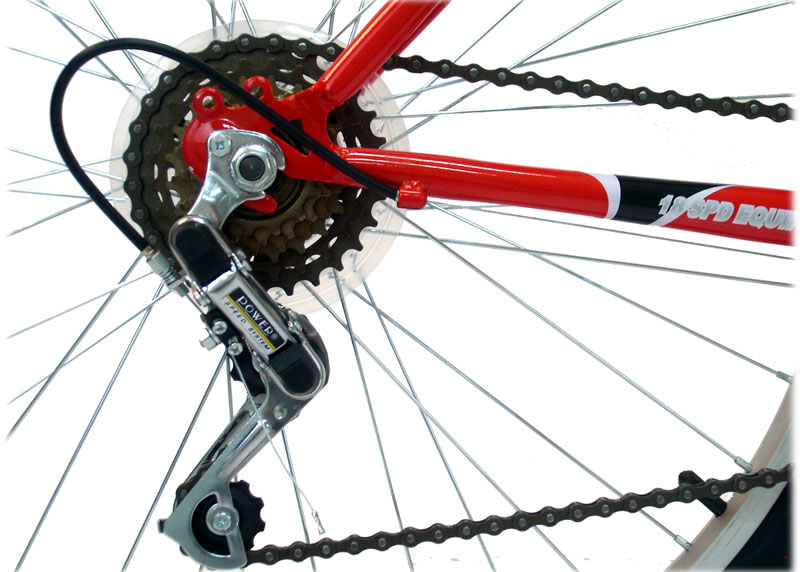 This is a Shimano positron derailleur requiring a rigid wire cable that pushes AND pulls. The casing is one piece from the lever to the rear unit and has a snap ring to hold the casing in place .

Not the answer you're looking for? Browse other questions tagged derailleur-rear cable tension or ask your own question.