How seriously should I take the maximum pressure rating of my cyclocross rims?

I own a very nice cyclocross bike that I use for daily commuting. It is currently fitted with relatively wide cyclocross tires (Continental Cyclocross Race 35-622) that I inflate to 4 bar (58 psi).

Since those tires are nearing the end of their lives and because I'm mostly riding on paved roads, I'm considering to switch to road tires (e.g. Continental Grand Prix 4000S II 28-622). However, I now noticed that my rims (DT Swiss XR 400) have a sticker saying "maximum tire pressure 4 bar" next to a pictogram showing a rim apparently broken at the weld. That pressure is of course hardly enough for any narrow road tires.

My question is now how seriously I should take this limit. I have a hard time imagining how too high pressure would break the rim and how exactly it would fail. Sheldon Brown mentions on his page that maximum pressure ratings are often rather arbitrary and he encourages experimenting, but he's talking about tires there, not rims.

I am willing to risk voiding the warranty on my rims or causing premature wear. But I would like to avoid the risk of catastrophic failure in the middle of traffic. 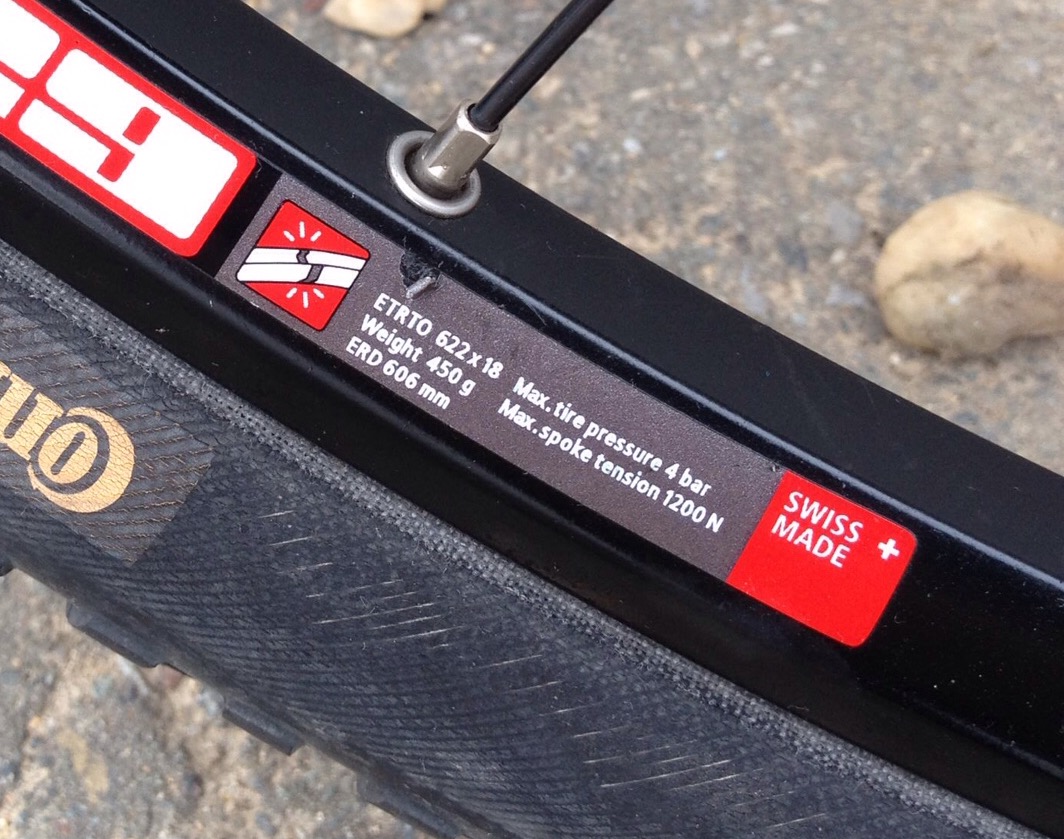 The reason that rims have maximum tire pressures is because the tire presses out at the bead seat. This load is carried by the "bend" in the 'U' shape of the rim. Higher pressures put more stress on the rim and, given enough pressure, will cause it to fail either at the bend or perhaps through the spoke holes if that is the weak point.

With rims designed for disc brakes, there is no need to build in extra material for wear from the calipers. This means the rims can be lighter and potentially more fragile. Since the manufacture thinks they can control the inflation pressure (or at the very least tell you about the limits on the pressure) they might choose to trade weight that goes into resisting inflation pressures for weight that handles riding stresses – assuming they are different.

I've never seen one fail (due to lack of experience, not because failures are unlikely, I'm not qualified to make that statement), but I imagine it could be rather messy. I think what would happen is that the sidewall of the rim would start to separate from the rest of the rim. The tube would help hold pressure for a while, but eventually the tire would unseat and that could lead to a rather nasty crash – especially if it happened on the front wheel.

The photo below looks like what I imagine could happen (and is described as an over pressure failure by some of the commenters). 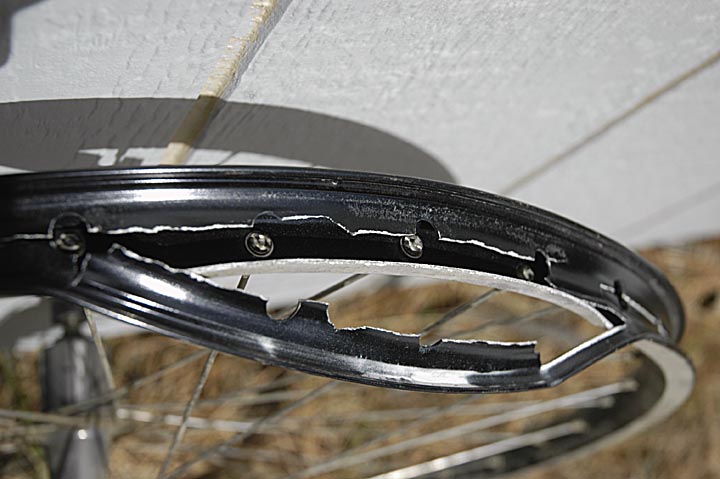 DT Swiss publishes the exact document you are looking for:

The document specifies the maximum usable tire pressure based on rim and tire width. More narrow tires allow for higher pressures. For example, the rims in the question (XR 400, inner width 18 mm) are compatible with tires ranging from 23 mm width at 9.0 bar to 60 mm at 3.2 bar.

I would suggest contacting the manufacturer. They should be able to provide you with a chart indicating the maximum allowed tire pressure for different sized tires on your rim.

It is worth noting wheels designed for situations in which you typically run low pressures (cyclocross, cross country MTB) do not need sidewalls as strong as wheels designed for rim brakes. This allows manufacturers to produce rims that are slightly lower in weight with the tradeoff being a lower maximum allowable pressure.

Your wheels obviously are not super lightweight race wheels but a few years ago people were blowing out the sidewalls of their rims when seating tubeless tires on such wheels.

Clearly the safest route is to follow the label. It is a rim designed for lower pressure. Why not go with a road tire that will run at lower pressure? The MICHELIN Protek Urban 700x35C runs just fine at 4 bar. I run an older version of that tire on my CX used as a commuter and it is a nice ride at 4 bar. I like wide tires on a commuter.

You said mostly paved roads. The other option is another set of wheels with road tires and use the current wheels for off road.

The force on rim is pressure plus size so it should take more pressure on a smaller tire. It is odd that that they just list pressure but that is common.

I used a pair of DT Swiss TK540 and both cracked all the way through the center when I was out on tour after about 6500 miles. Not sure at which point when the cracks first started appearing as the rim was lined with tape. but when the wheels needed truing and the spokes were at the end, the mechanic discovered what was going on. These were 29" mounted with Marathon Mondial 28x2.0 The side wall did not fail but the center was cracked the same as in the above picture. The tires were inflated to between 45 and 50psi

That is a rather disappointing pressure rating...

In this increasingly litigious world of psycho-lawyers, one can't be too careful. I'll bet they can handle 8 bar.

If you plan to run your tires at 6 bar (for example), inflate one of them to 8 bar and let it sit for a day. See what happens. If it doesn't blow out then you're definitely safe at 6 bar.

Not the answer you're looking for? Browse other questions tagged tire rims cyclocross tire-pressure or ask your own question.

5
Is the max pressure on tubeless rims specifically for tubeless, or do they apply to tubed tires too?
1
How much pressure can mountain bike tires take?
4
What pressure should I run? Front versus the back wheel?
2
Can I inflate to 8bar?
4
How does my tire pressure effect the tire's maximum load?
2
What is the maximum tire pressure?
8
How can I inflate a tire to the correct pressure?
7
How seriously should I take Fulcrum Racing 6DB tubeless tire compatibility warning?